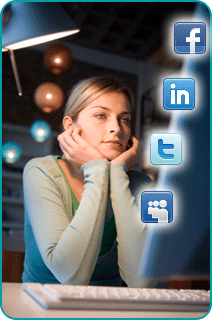 In 1950, it was rare for someone to own a television. By 1970, almost everyone watched TV. Almost a decade ago, it was really only hardcore geeks and the avant garde who were involved in early forms of internet social networking like Friendster and, later, Google’s Orkut. Today, anyone who is not on a social network like Facebook, Twitter or MySpace is missing out on the most common way in which people interact and keep in touch.

One of the most exciting parts of social networking is keeping in touch with your friends. How did people ever manage to do this in the past? Your network of close friends, coworkers, old pals and family is an extension of yourself. At what point do you draw the line between who you let see your profile and personal information, and who you do not add? Your answer to this question reveals a fundamental truth about who you are. Knowing your purpose for social networking is the first step in taking control of your online presence and interactions. As you seek to define who you are to the world through social media, here are some green lights and red flags you will encounter on the social superhighway.

Green Light: A guy you meet at a party “friends” you on Facebook or follows you on Twitter the next day

You have much work to do to your profile before you let him have access to your page. First, you might want to put up a flattering picture of yourself. When your profile picture is unflattering, the message you send is that you are not a catch, not worth pursuing. If your profile picture is of a pet or some cute symbol like a heart or a flower, you send the signal that other things in life are worth showing more than you are. While it is nice to have these types of pictures up for a day or two when you are feeling in a particularly loving mood, once you know that a possible partner is looking in, you must put up a picture that reflects you in a great light. After you have gotten to know this person online, in a week or two, you can go back to rotating some images that reflect your happiness with the world as you encounter it. But when someone is interested in you, you must keep a constant reminder up of what a catch you are.

Next, it is time to scrub your profile. While it’s not an issue with Twitter, it’s a good idea to go into Facebook (and other social networking sites that host pictures) every few weeks and see if any of your friends have posted pictures of you that might be embarrassing. Make it difficult for people to see these, either through privacy settings or by taking your name out of the tagging that accompanies each picture. The first impression you make on someone might be in person at a social engagement, but an examination of your profile is the first online impression you make and it should reflect you in a good light. It’s one thing to show you having fun with friends at a party. It’s another if a person tags you in a picture from when you might have been celebrating a little too wildly – is that the person you want a possible future partner to think you are? Remember, in a relationship, a partner sees you on five nights of the week that are not the weekend. For every two pictures of you playing, there should be five of you being close to your version of normal.

Red Flag: A friend from the past contacts you with an urgent plea to reconnect

It’s one thing to share a few old memories with a friend, but if someone from your past reaches out with some urgent need, you might want to take a “go-slow” approach. If this person was a love interest and you are involved in a relationship right now, you must be clear to your current partner about being contacted and clear with your ex that you are not to be pursued for love. Any reconnection with an old love interest brings issues of intimacy to the front. If you are in a relationship, you should only be sharing intimate moments, both verbally and physically, with your current lover.

If you are single and an ex contacts you, question the desire for revisiting everything about your relationship. This may not be the inspiration for making a new connection as much as revisiting the physical chemistry between you two.

If an old friend direct-messages you on Twitter, beyond a few shared memories, be wary of someone who immediately wants to become part of your life. Even if this person from your past is well intentioned and just seems lonely, there is something parasitic about becoming better, closer friends in a few days online than you ever were in person years ago.

Green Light: It turns out that a new friend or coworker has a few friends in common with you

While you might initially be worried that someone from a different walk of life has an insight into who you are without allowing you to control what is revealed, none of it is likely to come as a surprise. People with the same set of friends tend to have more in common and share the same outlook on life than people from wildly divergent social origins.

Red Flag: A friend of yours initiates awkward or inappropriate interactions online with someone whose only common bond with this person is your mutual friendship

There are lots of people out there who do not share any common notion of civility. Two people from two different walks of life may have differing opinions on a post you make, no matter how innocuous. Even if you stay away from traditionally touchy subjects like religion and politics, some people can make chaos out of a simple comment about the weather.

It is pretty easy to send someone an email asking them not to be a smart aleck on your profile. That is a reasonable request to make. Understand though, that the person complaining about the comments of others is not necessarily some innocent person. People might be acting out on your social networking profile out of perceived injustices and specifically want attention from you or want you to choose them in some pretend battle with an unknown stranger. With this in mind, do not jump in as a referee and judge who is right and who is wrong. You can send people private messages to work things out, but weigh the advantages and disadvantages of “defriending” people on Facebook with great care. Check out their interactions on the pages of others and see if there is a pattern in their behavior that makes it hopeless to expect them to behave nicely.

Wherever you find yourself in the world of social networking, always question your initial assumptions about people whenever a confusing situation develops on your online social networking profile. When you present a positive image to the world, you will receive positive energy back from the universe, be it online, in person or in some coming technology that we will all be embracing in the distant future.