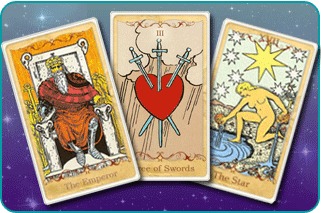 The Tarot forecast has been drawn for the week beginning on Thursday, December 23 through the middle of next week. This forecast focuses on the energy that is dominating your life in the present as well as analyzing the foundation of this current situation as it was created in the recent past. With this grasp of what you are going though, the forecast then looks into the future and sees what Christmas Day and the following few days hold for you.

The Tarot cards that have been drawn for this week are: The Emperor in the past position, the Three of Swords in the present position and The Star in the future position. As you read this, the Three of Swords casts its pall over Thursday. This is a card of sorrow. But the present rests on a foundation of the past. You must look to what has recently transpired to understand the state you are in.

The Past: The Emperor

The past position of this week’s reading is occupied by The Emperor. This is a severe and authoritarian card, especially when it appears in the past position. Your current situation may be directly related to interactions you have recently had with an authority figure. This could be a boss, a parent, a lover or an overbearing friend. The Emperor is that voice inside you telling you what you should be doing even when your skills, talents and desires are not aligned at all with what is needed to enact that “should.”

The card depicts a solitary figure on a stone throne. His beard indicates age, wisdom and expertise. He holds a staff in one hand and an orb in the other. These are symbols of authority. It is important to note that The Emperor does not possess any weapons. This is not a card of an attack by an authority figure. The Emperor rules with the weight of his authority, and little else.

Look into your recent past and ask yourself if there was someone in your life who was dominating your psyche without ever attacking you. Perhaps this person is now just a memory. Have the holidays revived the memory of a loved one who has passed on? Is a partner struggling with memories of what once was that will never be again?

Whoever The Emperor is in your life, the core effect of recent encounters with this card have put you in a somber mood. The Emperor could be your boss, but this card could also represent your husband’s departed mother whose memory is palpable during the holidays.

The Present: Three of Swords

If you are enjoying the holidays, the winding down of the year and the getting together with friends and family, the Three of Swords represents someone else in your life, someone whose gloom may be nearby wherever you go.

There is really no way to “make nice” about this card. A heart pierced by three swords floats amidst a rainstorm – it is not a card to get the day before Christmas Eve and expect a boost in your holiday spirit. At its best, the Three of Swords is stern and serious. Perhaps you have a child in your life who is really pushing the boundaries of acceptable behavior. The Three of Swords will inspire you to put coal in his or her stocking as a measure of justice.

As festive as this season is, the mourning for the past could dominate today and tomorrow as you build toward the big day. If you do not celebrate Christmas, the transition between the intense authority issues of the past week into this weekend will be one of somber lonely heartache. Did you lash out at someone with overreaching power? The Three of Swords is a card of regret.

The present is a time of holding back feelings. Swords represent thoughts, ideas, and discussions. Words hurt. But Swords are also analytical and you may be examining your emotions at present as much or more than actually feeling too deeply. If you have been wounded by words, said some unkind things to another person or are seeing the effects of harsh words on a lover or close friend, the manifestation of this negativity may be putting a damper on today and tomorrow. But at some point, you will have thoroughly analyzed the situation and processed it.

As you understand the difference between thought and emotion, you will be inspired to see the positive side of the big picture. Getting out of the isolated feelings associated with gloom can end despair in a rapid and complete manner.

The Future: The Star

The Star is the card of inspiration, hope and an intuitive understanding of your place in the universe. We are all carrying stardust with us that was present at the big bang. Knowing this can assist you in salving the wounds of isolation. After a few days of feeling put upon and sad, serenity will soon arrive that will make the holiday weekend quite enjoyable. This peaceful feeling will be contagious and will spread from you to those around you who are also feeling a bit disconnected from the usual happiness occurring at the end of the year.

The Star depicts a woman pouring water from two vessels into a small pond and onto the nearby ground. Under a night sky with a large glowing star and a cast of smaller stars, this symbol of purity is enacted to remind us that we can wash away the bad feelings and find our own peace.

This is a reading that pulls you into the depths of wondering why you have it so bad, only to leave you elated at what a good life you are capable of embracing whenever you relax and appreciate it. For a more detailed forecast personalized to you for your week, month or year ahead, call a Tarot reader today. Happy Holidays!