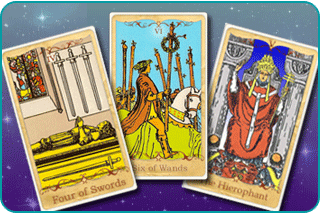 Three Tarot cards have been drawn to forecast how your week ahead looks, beginning with this weekend. The cards represent your past, present and future: The first card describes your recent past, the middle card explains the dynamics of the seven days beginning July 23, and the future beyond July 29 in relationship to this week is foretold by the third and final card of this reading.

In looking at the weekend ahead and the following workweek, we see that issues that recently tried your patience are not going to stop you from having fun … but will they force you to meet up with the boss of bosses?

The Past: The Four of Swords

The Four of Swords was drawn in the past position. Leading up to this weekend, you have had to stop and smell the roses in anticipation of bigger and better things. With the way the world economy is, taking a time out and not spending wildly is becoming the norm. The blessing in disguise for all of us has been to take life a little easier. If you have a master plan of saving for a goal or planning for a special occasion, the recent past has been quite cooperative with you. Maybe there has been a light social calendar, or friends of yours have gone out of town and left you with a little time to think about what you want and how to get it. In the Four of Swords, the stone sarcophagus of a knight is glowing gold from the light of a nearby stained glass window. One sword is on his side, carved into his tomb. But if there is any question about whether or not he is past his prime, there are three swords hanging near the window, at the ready. Action is being delayed, but is not impossible. If you have been feeling under the weather, you have not missed much, really. If you were worried that things have been boring lately, you should actually appreciate the break in the action that you have had, as your energy will soon be needed.

The Present: The Six of Wands

For this reading, the card in the present position is the Six of Wands and the present is the week ahead, beginning with the weekend starting on Friday, July 23. The Four of Swords is a card of resting up, and it transitions nicely into your present situation. The recent past saw a casual week with a light workload now lead into a card that sees you getting lots of acclaim and praise, but not necessarily expending any more energy in the process.

The present is dominated with feelings of pride. It might be pride in a job well done, but it will not be anything you are working too hard at now. The Six of Wands references that which has already been achieved. This is the time during which you get credit for it. If the Four of Swords indicated being a little sick or unable to get around easily, the Six of Wands does not mean you will be instantly healed. However, you don’t need to be in perfect health to get your name in the newspaper or have someone you admire mention you in a flattering way to other people.

This is the week when a lot of what you have worked for will deliver results that involves people taking notice and acknowledging that they know who you are, what you do and how highly they think of all this. If you have been dieting, this is the week where people in different walks of your life will mention that you appear slimmer. If you have been making the scene at the clubs on the weekend, expect some of the regulars to compliment you on your style as you break through toward being accepted by the larger group. If you have put effort in with your church or activist network, expect kudos from the faithful.

As the workweek starts, expect to get noticed at work for doing something good by co-workers. If you are unemployed, friends and family will have praise for some of your recent actions. There may be an article about you appearing on a website that your social network enjoys. A lover will say something that makes you appreciate his or her affection, and simultaneously makes you feel pretty darn good about yourself and where you are in life right now, all things considered.

The Six of Wands features a man on horseback trotting through a crowd of well-wishers. Their wooden staffs are raised in honor of what he has done. This is you feeling like you are walking off the grounds during a week that sees you acknowledged for the successful actions you have taken.

The Future: The Hierophant

The Hierophant card is in the future position. This is the card of the establishment. The praise that comes with the Six of Wands will lead to encounters with powerful forces and influential people soon. After July 29, all of the mid July praise you received will have set the stage for you to meet up with a person who represents the core establishment of important places and organizations in your life.

Perhaps the praise that you get this week is just the beginning. The Hierophant sits on a throne. The apostates bowing before him with shaved heads respect his authority. It is unquestioned. Your future is about to meet up with a powerful person or force that makes people bow in respect. Whatever the future holds, your relationship is now closer to the traditions that guide the way things are done in your day-to-day world, perhaps to the point that you have some influence on them.

If your life is out of balance, this forecast could have some negative consequences.

It appears that the most energy you are going to expend in the week ahead will be in celebrating your own awesomeness and attracting the attention of some entertained powers that be.