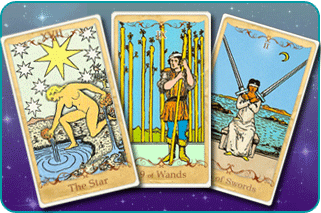 The forecast for the week of October 15 – 21 shows the Nine of Wands in the present position. This card is between The Star in the past position and the Two of Swords in the future position.

The Nine of Wands is the card influencing the weekend of October 15. But you will not arrive at your current state of affairs in a bubble. There is a foundation that summarizes the reason the present is in its current condition. This foundation is the past and the Tarot card representing the recent past in this week’s reading is The Star.

The Past: The Star

The Star card is one of inspiration and serenity. Of course, the recent past may be more related to the chaps associated with adjusting to a new school year or employment situation. But even if your daily ritual has been the same of late, The Star card represents a moment of repose when the quality of life brought some answers your way.

Elements of this card all point to a state of mind that is open to ideas and solutions. The nude woman on the card is vulnerable, and yet is unaware of anything other than watering the grass on which she kneels and the pond which gives sustenance to all around her. Meanwhile, it is The Star above that is giving her a dose of cosmic inspiration. This is the card that pulls you into a different perspective and, in doing so, allows you to see solutions that were not apparent while you were marching to the daily grind.

When you evolve into a regular schedule, the sorting out of your life situations should make you sharper and more cognizant as you move back into the tasks at hand. After a bit of rest and relaxation led to some new understandings, you realize that you still have work to do.

The Present: Nine of Wands

You will hit the ground running this weekend and any obstacles that appear will only inspire you to persevere. This weekend is about seeing a project through during a difficult phase. You will have an unusually strong focus on something in your life that may have had too little attention paid upon it recently. Whether or not you are overcompensating is open to debate. What is certain, though, is that you are out of any daydream state and are locked in on finishing what needs to be done.

The man pictured on the Nine of Wands card has been bruised, beaten and even a little bloodied. The wands before him set up a fence … or are they on the attack? Regardless, the look on his face sends a clear message that his focus on using the one wand in his hand is something that the other eight wands will have to consider. Despite your current efforts, there may not be much progress ahead. Your efforts are being blocked and at times it is hard to tell why.

The Future: Two of Swords

As the weekend fades into the week, by the time Monday becomes Tuesday you may see some signs that your efforts are not working. You may be surprised. But look around and anyone paying attention will tell you that you are not making any progress. Have you fooled yourself into believing in a lost cause, or are your aims noble but your methods to move things along misguided or uninformed?

The blindfolded figure holding the crossed swords in Two of Swords is only endangering herself. Although there is no one visible to attack, she cannot be sure. The swords are crossed and heavy, not ready for any battle. And she is sitting, not even prepared to defend herself from an attack. Of course, beyond the stagnation that this card represents, one can guess that this lovely lady’s only hope is for a lucky strike should one of these swords be necessary.

You might feel rested and inspired going into the weekend. This will keep you battling and able to create a new focus on things that need to get done. Obstacles will not stop you, but after a while, you might realize that others are not joining any of your battles as the direction you are taking is completely off course.

Predictions for Different Areas of Your Life