Love Voodoo: How to Perform a Love Spell

Home /Love/Love Voodoo: How to Perform a Love Spell 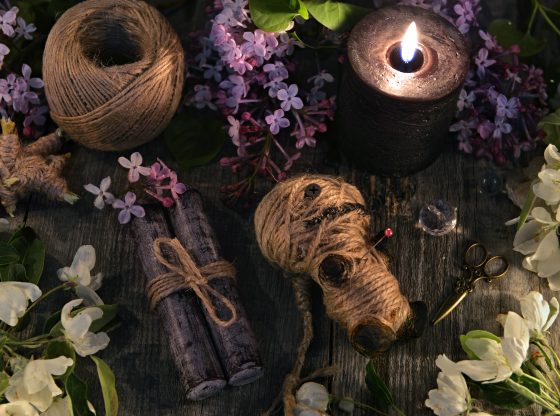 The ancient art of Voodoo originated as shamanistic traditions brought from Africa to the New World during the slave trade and combined with the ritualism of the faithful in the Western Hemisphere. Voodoo is the belief that the ritual enactment of a desire will produce that desire. The rituals of Voodoo almost always involve attracting and keeping a lover. In centuries past, when information flow was much slower, a Voodoo priest or priestess was entrusted as the keeper of these rituals, but in the information age, one can become a practitioner of the simpler of these ritualistic ceremonies. The love spell is the most common type of Voodoo practiced. Love voodoo spells are quite effective in aiding a seduction, getting a lover to return to you or in strengthening the devotion of a man you are currently with. The bad reputation of Voodoo is due to its success in seduction; it has received envy and loathing over the years, largely from those whose lovers have abandoned them under the influence of a Voodoo love spell.

Wondering how you’ll find love won’t get you answers, but a psychic reading will. First 3 minutes free!

The Risks Involved With Voodoo

Voodoo is not without its risks. If you cast a Voodoo love spell on a man, realize that your soul could become bound to his. Do not use one of these spells on a man for whom you lust after but do not want to be with forever. These spells bind you; they are an oath to ethereal energy patterns (aka spirits) that you will produce amazing love energy for the universe if only these spirits will alter the energy of the material plane in your favor. The Voodoo priestess lives in isolation specifically because she can have any man with the wave of her hand, but knowing this, she hides from all men to preserve her eternal soul.

Anointing Voodoo Oil, a spell to make him want you

Take some household cooking oil. Fill the plastic cap from the bottle with some oil. Put one of your eyelashes in the oil overnight. Insist that he put his index finger in the oil for a minute. Tell him it is a test to see how steady his pulse is, as this will appeal to his machismo. Hold his wrist like you are taking his pulse. Lift his hand and quickly raise his finger to your lips. Apply the oil on his finger to your lips as you would your lipstick. Now kiss him, closed lips. He will begin to see you as his soul mate and want to kiss you more and more.

The Candlewax Cover, a spell to attract him to you

In more primitive times this spell involved writing on banana leaves but paper will suffice. Write his name on the left half of the paper. Write it four times – four is the power number of Voodoo. Now write your name five times on the other half of the paper. Light a purple candle and allow four drops of wax to hit his side of the paper. Fold the paper over so that your names touch and are sealed together with the wax. Purple is the color red and blue â€“ the red of human blood binding with the eternity of the blue sky. Now place the paper flat in a shallow disposable pan and pour water just high enough in it to cover the paper. Now place a red candle on top of this immersed paper and light it. When all of the wax has melted into the water, he will melt into your arms.

His Name As Your Number, a spell to keep him close

How many letters are in his first name? How many in his last name? That is your lucky number. Write it on the inside of your underwear. Every Pair. In ceremony after ceremony we see the devotees of Voodoo taking the number of steps in their magic number, ritualistically, over and over in a sort of hypnotic dance. Pulling in the energy of the structure of his name allows you to control that energy. Having the number tattooed on you is not recommended, as the binding of eternal souls may have more consequences for you than you can even perceive on this material plane.

The Voodoo Doll, a spell designed to bring back a lover

This is the most advanced of the Four Simple Love Voodoo Spells. It is also the most powerful. You must get some of your man’s clothing and his hair in constructing the doll. Making the human form out of one of his unwashed tee shirts is especially powerful. Glue his hair to the top of the doll’s head and put small swatches of his clothes corresponding with where he wears them in order to make your small sculpture even more powerful. A successful doll will control his physical form in the world from entering into any physical activity with another person. If you can retain a speck of lint from his bellybutton to glue on as the facial features of this doll, it has been shown to be one element of the modern world that improves on the power of ancient Voodoo.

The stereotype of sticking pins in a Voodoo doll to cause pain is inaccurate. A woman pins her Voodoo doll to her bed to make her man come back to the bed to satisfy, love and comfort her. Pin your Voodoo doll where his pillow goes next to yours. When you lay down for bed, talk to the doll as you would talk to him. Your departed man will psychically hear you and enjoy your desire no matter how great the distance between you two. Nothing will inspire him to change his mind more than the pillow talk you share with the doll made in his image.

While all these spells are tempting to use, you must be safe when it comes to voodoo powers. To learn more about to safely cast love spells, talk to a psychic reader or a love expert on Keen.com today.