My friend, Jess, had moved back to town after a stint in the Peace Corps. She had been with the same boyfriend all through college, but they broke up when she went to Africa. It made sense; they wouldn’t see each other for two years, after all. But after being back for a year, she was still unable to find romantic success. She came over for dinner, and we talked about her situation.

“It’s like there isn’t anyone but Mattie,” she said. “I mean, I’m over him, and we’re even sort of in touch as friends, but I can’t get past him. Does that make sense?”

I had my Tarot deck out, and we were enjoying a glass of wine while the chicken was roasting. I pulled one card for her. It was the Five of Cups.

“Hmm…the card is suggesting there’s still some disappointment and sadness, something holding you back. What do you think?”

We talked about it a while longer, but she insisted she was over him. After dinner, she mentioned that she still had their romantic emails and cards, and even a high school class ring he’d given her.

“That could be it,” I said. “In your head, you’ve moved on. That’s real, but there’s something in your heart that’s still holding on to these old pieces of his love. Think about it.”

A couple days later, she called me. She had gotten the cards, the ring, and printed the emails out. Sure enough, there were still feelings attached to these objects. Since she was clear that she didn’t want to get back together with him, I suggested performing a simple ritual to cut the attachment. She was hesitant but decided to go for it. And (spoiler alert) it was a success!

The steps are simple: find your sentimental objects (print them out if they’re digital), build a fire, release the objects to the flame, verbally release your old flame (couldn’t resist the pun), observe the objects as they are transformed, ask for new love (if you want), and then thank your guides (God, Goddesses, whoever), and douse the fire.

It was autumn, so I suggested that Jess build a little bonfire in her backyard to burn the emails and cards. You will want to be able to sit comfortably near your fire and prepare any other ritual items you desire, like a candle or sage. If you don’t have a good place for a fire pit, you can use a barbecue or burn barrel. Or, go to a campground where there are fire pits and make a weekend retreat out of it.

If you can’t be outside, use an indoor fireplace or wood stove. If that isn’t possible, you can burn just a small piece of your object in an appropriate container (like a cast iron pan or even just in a candle) with the intention that the small piece represents the whole. Metaphysical shops often sell mini-cauldrons that people use for burning resins and charcoal. Chances are you’ll use it again, so it’s an inexpensive investment. If there is simply no way to create flame safely where you live (or if you are uncomfortable with fire), you can visualize burning the objects. Fire is powerful because it transmutes objects from one state to another—but it isn’t as essential as your intention.

If there are items not appropriate to burn, like jewelry, you can give them away or even sell them with the intention of releasing the past. Jess sent the ring back to Mattie with a brief, friendly note (not an explanation). I had another friend with a family heirloom ring that she had no way of returning to the ex, but she sent it to his sister since she didn’t feel it was hers to sell or give away. Another client left a ring at a temple for Lakshmi. Be creative.

But to be clear: you must release the physical objects somehow for this to work.

Jess spoke a prayer as she gently placed her objects into the fire. Some people read poems, write their own verse, or use lines from a song. One friend even played the song on her guitar as her old beau’s shirt burned in her fire. Jess then watched the objects fall into ash and opened her heart in thanks for all that she had learned with Mattie. She cried—yep, we tend to—and then when the fire burned low, she thanked her guides and put the fire out. As the last of the smoke rose to the sky, she asked to receive a new love.

A month later, she met an amazing guy. Don’t you love it? And this works—I’ve experienced it myself and seen it happen with others.

Most people tend to keep mementos from past loves. But what I’ve found—and Jess and loads of other women have, too—is that holding onto these items holds us back. Objects hold energy, and though it might be positive energy, it’s still from the past. If you are brave enough to let love’s relics go, you may find that the space created will soon be filled by a new love.

Do you need help releasing an old love? Ask an advisor on Keen for help, and open the door to new love today. 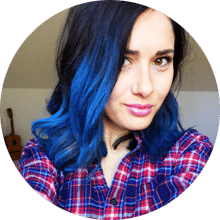 Zada is a Boston-based intuitive and spiritual blogger, Yogi, and dog mom to two Cocker Spaniels, Demi and Bruce. She specializes in Tarot and Reiki, and uses her intuitive gifts to help individuals reach enlightenment and lead their most authentic lives every day through meditation, visualization, and Jivamukti. Her spirit animal is a Pegasus named Randy.