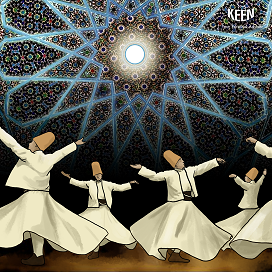 Love is for vanishing into the sky. The mind,

for learning what men have done and tried to do.

Mysteries are not to be solved. The eye goes blind.

When it only wants to see why.

There has never been a time in human history when women and men haven’t been looking for answers, leafing through the wisdom of ages to understand where they have been and to know where they should go. Problems of love, loss, money, family, and friends are not new. But, history tends to be told from the perspective of the great and mighty — not from the perspective of everyday life. We don’t learn about the people on the ground who were searching for answers to the same questions you and I are asking today.

In every empire and every kingdom, there have been people looking for spiritual guidance. In few places was this starker than the Ottoman Empire. As the amalgamation that straddled the East and West, the Empire contained thousands of languages and tribes. It never cohered as a full entity. Despite — or perhaps because of that — the Ottoman Empire saw one of the greatest flourishings of mysticism in the history of Islam. The beauty, sensuality, ecstasy, and spiritual depth of the Empire’s mysticism continue to inspire us to this day. The history of mysticism in the Ottoman Empire is complex, but can be distilled down to one man: Jalal al-Din Rumi, the poet of love.

In his magisterial history of the Empire, The Ottoman Centuries, Lord Kinross discusses the way the nomadic Ottoman people swept out of Mongolia (in a spread that would help to form the Finnish and Hungarian people as well) through the ancient Central Asian steppes. He says, “Losing unity in dispersal, they nonetheless retained a distinct linguistic and racial character. Their sense of common identity was so strong that, in their shamanistic Pagan worship of earth, air, fire, and water, they referred to such elements of nature as ‘Turkish.’” This Pagan identity was supplanted by Islam as they spread West and came into contact with that emergent civilization, but it was never actually lost. By the time the descendants of Mongolian horsemen forged the Ottoman Empire in the 13th century, the antique mysticism had combined with the new religion to create a beautiful spiritual synthesis.

Mysticism in the Ottoman Empire had a name — Sufism. Its adherents were Sufis. Sufism had arisen centuries earlier but was generally considered heresy by the ninth and 10th centuries. The Ottomans, who became the stewards of Islam, still had some conservative religious elements, but many of their leaders were either tolerant of Sufism or outright adherents, particularly of the ecstatic form of mysticism known as Mevlevis, the most prominent practitioner of which was Rumi.

Rumi was a Persian from Anatolia, which is now the Turkish hinterlands, but at the time, it had just been incorporated into the Ottoman sphere from the wreckage of the Persian Empire. The Persian Empire was known for its joyful mysticism. Rumi was born into this, and through his poetry, formed the greatest distillation of religion and human experience that anyone had before or has had since.

For Rumi, looking for answers in life meant finding the synthesis between God and man, and that synthesis was love. Romantic love, sexual love, the love between friends — they were all the same. He was a joyful believer in a unified theory of consciousness, the idea that God lives inside of us, and we are all inside of God, and that the fullest expression of that was the joy we felt in each other’s love.

In his writings, Rumi explored the mysteries of life:

I am so small. I can barely be seen.

How can this great love be inside of me?

Look at your eyes. They are small.

But they see enormous things.

What Rumi and the Ottomans Can Teach Us Today

The reason Rumi is popular today isn’t just because his poetry still sings (particularly in the translations of Coleman Barks), nor because his poems are frequently titillating (though they are), but because they still offer wisdom. More than that, they offer questions that are transcendent through time, and that we are still asking today: Why am I me instead of someone else? What does it mean to be alive? Should I throw myself into the vulnerability of love? What happens next? Where will I go?

Rumi frequently clashed with the conservative moral of his day and with the rigid structures. For many of us, we feel the same way, that inherited wisdom doesn’t have all the answers. That’s why we, like people in the 13th century — or the 17th or the 20th — seek a spiritual guidance that reminds us there are stranger currents in the world than we sometimes realize.

Rumi thought the divine was in all of us. He pulled from the ancient past of his people and made it relevant to a new and vibrant empire, a mix of peoples unlike any in world history. This human continuum is still part of our shared heritage, because, as the poet taught us, what you love today and what someone loves 800 years from now is not a different kind of love. It all flows from the same source, and the questions we have can be answered by drinking fully from it.

We’re all seeking answers to questions related to love and life. Advisors at KEEN.com, including psychics, can help provide the spiritual guidance you need.