The Early Origins of the Tarot: How the Cards Came to Be

Home /Tarot/The Early Origins of the Tarot: How the Cards Came to Be
Tarot | 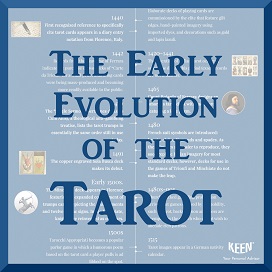 Tarot card readings have become an integral tool for many of us who yearn for enlightenment and self-awareness. They are part of the landscape of modern culture, but the tradition of the cards reaches back for centuries. In researching the tarot, however,  there is a massive amount of information to sift through, much of it vague, contradictory, and ultimately, unverifiable.

What is known about the tarot’s earliest origins, however, is that no matter the source of their symbolic imagery, the cards evolved from the early playing cards favored in the courts of the European nobility who were, at the time, the only ones who could afford to pay artisans to create items for leisurely pastimes. Eventually, as printing evolved, cards–including the Tarot–would become mass-produced, and more readily available. But along the way, politics and religion would form influences on the cards’ development that would ultimately far outweigh the innovations of printing technology.

The following is an early timeline of events tracing the tarot’s early origins, from the first recorded cards, up until the dawn of the Golden Age.

As you can see, in its infancy, the tarot–like other card decks of the era–were employed primarily as playing cards, and were only available to the elite. As the printing process moved from hand blocking to more readily reproduced methods, cards and other printed matter became accessible to a wider audience, which in turn opened opportunities for the cards to be used in a variety of ways. Early ties to the occult took hold, and eventually, the tarot became inexorably intertwined with fortune telling and other expressions of spiritual divination.

We will continue to explore the history of the tarot. Next time, we’ll learn how tarot comes to the fore in a “Golden Age,” as 19th Century champions take the cards and the study of the occult to new heights.

If you want to see how your own history stacks up, there’s no better teacher than the Tarot. Why not let a KEEN advisor make your life an enlightening course of study?

Keen Editorial Staff
Keen's Editorial Staff is made up of world-class writers, astrologers, psychics, and advisors with diverse experience and spiritual sensitivity.
How a Tarot Reading Gave Sue From Skokie Deeper Insight Into a Career Dilemma
Let the Two Path Tarot Spread Lead You Down the Path to Success