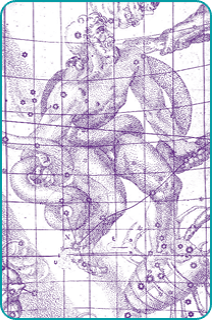 The media was recently abuzz with results from Minnesota astronomy instructor Parke Kunkle, who reported some startling findings in the field of astrology. It was claimed that the zodiac sign under which you were born might not really be where you thought it was. According to Kunkle, the signs of the zodiac have shifted over time since they were first discovered and codified by the Babylonians approximately 3,000 years ago due to a “wobble” in the Earth’s axis caused by the Moon’s gravitational pull. Those who thought they were Scorpios might suddenly be Libras and those who thought they were Pisces could now be Aquarians. In addition to that, a thirteenth sign called Ophiuchus (meaning “Serpent-bearer” in Greek and pronounced “Ooh-FEE-yew-kus”) had appeared in the last few millennia, right in between Scorpio and Sagittarius.

Unfortunately, the part of the story that hasn’t gotten much attention is that this earthly wobble is old news – it’s been nearly 2,000 years since the phenomenon was first discovered. That a contemporary scientist appears to be ill-informed on the work of the Roman era’s greatest astronomer, Claudius Ptolemy, is disappointing. Ptolemy is the father of the geocentric (earth centered) view of the universe, which was debunked almost five centuries ago by the heliocentric (sun centered) view of the universe theorized by Nicolaus Copernicus and popularized with the support of Galileo Galilei. However, Ptolemy’s geocentric map of the solar system accurately records the position of the Sun, Moon and planets relative to Earth. For example, when the Moon is full, it is on the opposite side of the earth from the Sun. This reality is reflected in Ptolemy’s geocentric model of the universe; despite being inaccurate in relationship to the solar system, Ptolemy’s geocentric model still precisely predicts the location of the Moon opposite the Sun in accordance with us seeing it as full.

When Ptolemy constructed his map, though, it was as both astronomer and astrologer. Long before our contemporary astronomy instructor was seeking headlines, the Greeks and then the Romans had noticed that the Babylonian astrological system was no longer accurate. Ptolemy’s breakthrough was to make Earth and its inhabitants the central focus of astrology and astronomy. Sure, astronomers have since backed the heliocentric mode of the Copernican system, but the geocentric Ptolemaic map of the solar system will still show them where a planet or constellation is in the night sky.

What Do You Think? Keen Polls by PollDaddy

Do you think there should be 13 zodiac signs?customer surveys

Kunkle pointed out that the Earth does not spin on a precise axis and implied that this debunked western astrology. Gravity from the Moon makes the globe wobble, meaning that each year never lasts the exact same amount of time as the previous year nor is a predictor of how long the next year will last. The difference in time is measured in seconds per year as the globe responds to this wobbling effect. Stretched out over a couple of thousand years, though, and the relationship of the earth to distant stars would change. What Ptolemy offered astrology was that the Sun’s relationship to Earth was of paramount importance, regardless of Earth’s relationship to stars that were not even part of the same solar system. In Ptolemy’s eyes, what the Babylonians had assigned as characteristics of particular star constellations was the effect the Sun had based on its perceived location from Earth – independent of what was beyond it deep in the universe. The zodiac signs may be named after different constellations that the ancient Romans chose to keep, but Ptolemy showed that not only were they not the centerpiece of astrology, that they were inconsequential. Since Ptolemy’s refinement of Babylonian astrology (this refinement is often referred to as the tropical system of astrology), the distant constellations have morphed some more and the wobble of the Earth has made their relationship to us far different than it was to the ancients.

147–168 A.D. – Ptolemy writes the Almagest, outlining his geocentric theory of the solar system and Tetrabiblos, his treatise on astrology that revised Babylonian astrology into the current tropical system.

1610 – Taking advantage of the invention of the telescope, Galileo observes Venus showed all phases like the Moon, helping prove Copernicus’ heliocentric theory.

2011 – Kunkle (re)announces the Earth’s wobble and claims the zodiac calendar is one short.

The Sun vs Constellations

The Babylonians discovered that the heavens exert an effect on people and charted how different times of the year produced different personality types. They also saw the spring begin each year when the Sun aligned with the beginning of the constellation Aries. After thousands of years, the wobble on the earth shifted our planet’s relationship to this constellation and Ptolemy noticed this – spring was not beginning when the Sun lined up with this point in the sky. Ptolemy’s genius was in realizing that the Sun lining up with the distant constellation was not what was astrologically significant, rather the Sun’s relationship to earth. By extension, the Sun’s relationship to earth was what determined your personality, your “sign,” and what foretold your future. The Sun determined your sign and to this day, astrologers call it your “sun sign,” not your “constellation sign.” The Babylonians gave more importance to the constellation and this is what Kunkle has seized upon.

Surprisingly, without even understanding the sphericity of our planet, Ptolemy’s geocentric map even factored in the Earth’s equator. What we call Aries now only has a passing connection to the Babylonian constellation of this name. This zodiac sign is determined by the annual timing of the moment when Earth’s equator is aligned with the Sun. On Ptolemy’s map, this reality is illustrated as the Sun being aligned with the equator; two illustrations of the same phenomenon. The voyages of Christopher Columbus proved the world to be round to almost all doubters. And yet, Ptolemy’s geocentric structure still reflected astral phenomena as it occurred in relationship to the earth. It was debunked as an inaccurate measure of the big picture but not as an accurate measuring device of planetary location and humanity’s relationship to the heavens. Ptolemy accurately charted how people experience the great beyond from their vantage point on this third rock from the Sun.

A Failure of Astrology or the Astronomy Teacher?

Without knowing anything about the earth spinning on an imprecise, wobbly axis, Ptolemy and the ancient Greeks and Romans noticed that the Babylonian system had lost some of its accuracy after a few hundred years. That some of their mapping of heavenly phenomena was later proven to be inaccurate is made much less consequential when thousands of years later, contemporary astronomers can make headlines when they trumpet these same results as “news.” You cannot blame the media for not having a comprehensive understanding of the evolution of astronomy from the Babylonian era through contemporary times. But it is a great disappointment when an astronomy teacher either has either no understanding of the basic history of astronomy or is ignoring it in order to insult astrology.

Keen Editorial Staff
Keen's Editorial Staff is made up of world-class writers, astrologers, psychics, and advisors with diverse experience and spiritual sensitivity.
Could a Leo Be Your Soulmate?
Long-Term Effects of Saturn’s Opposition to Uranus