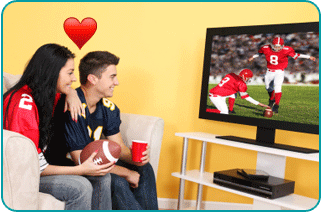 The 44th Super Bowl is scheduled to take place in Miami on Sunday, February 7, 2010. Kickoff should occur whether or not you know anything about football, you should know this: of the 100+ million people that will watch the Super Bowl, most of them will be men, many of them will be single, and a lot of them will be cute.

Using the power of your zodiac sign can prepare you for your best love options as cute, single guys cozy up to the TV to watch the game. Knowing how to work in flirtations with a potential boyfriend while he watches the game will make you irresistible and the final score in the game may not be the final score of the night!

Bonding with a man over sports almost always deepens a relationship. For him to be able to talk about his favorite team – which is likely his favorite subject – with you will make you more special and irreplaceable than all the girls who have come before or will flirt with him after he commits to you. It might be pathetic, it might be sentimental, but here is a rule about men: No man will ever easily give up on a relationship that is grounded in the love of his team.

First, here is some background on what the planets are predicting for the game on Sunday evening: With Venus in Aquarius coming into the same spot in the sky as distant asteroid Chiron, look for the underdogs to take an early lead and a star player to suffer a dramatic injury. The Moon in Sagittarius will make for a spirited, dramatic game and the late evening movement of Venus into alignment with Neptune will make for an inspiring wave where the “peoples’ choice” team takes the contest.

But who cares which team wins when winning a man is what you are there for? Read your zodiac sign below to see how Super Bowl Sunday’s planetary alignments favor your love life. Don’t take a time out when love could throw you a pass at any moment…

A big party will be the best place for you to find a new love interest or tag along with your mate for the most fun.
Football Conversation Starter: Which team has the best pass defense?
Cheerleading Tip: Make name tag stickers for everyone.

A company or school get-together is the perfect place to meet up with a hunky single friend of a co-worker. Ask him lots about himself!
Football Conversation Starter: What is the difference between a quarterback and a running back?
Cheerleading Tip: Cleaning up a little after halftime allows you to get the best gossip in the kitchen.

Chat it up with a foreign guy who is confused that American football has such an emphasis on using one’s hands. Even if you don’t the rules, fake it ’til you make it.
Football Conversation Starter: Can the wide receiver throw the ball back?
Cheerleading Tip: Being a designated driver could make you the most popular girl at the party.

Let your friends set you up with a guy friend of theirs and meet him at their place or out with them for the game.
Football Conversation Starter: What are the most points ever scored in a football game?
Cheerleading Tip: Coming up with clever nicknames for players can make rooting for them more fun.

Make the Super Bowl a stay-at-home event with one guy. If he wants to be with his friends, perhaps you can show something he can have during every time out on the field.
Football Conversation Starter: Can we make out during the commercials?
Cheerleading Tip: Giving him a foot massage is a great substitute for following the game.

Get to every guy at the big party by helping out with the football pool. This is a simple way to wager a few bucks and an opportunity for you to meet every guy at the party.
Football Conversation Starter: Do the Vegas casinos pick their favorite teams or mathematical favorite?
Cheerleading Tip: Organize the party to do “the wave” after halftime.

You might be crushing so hard on one specific guy who hardly notices you. Look around and see the three that are literally fighting for your attention.
Football Conversation Starter: Is it out of bounds if he steps out and then back in?
Cheerleading Tip: Making a food & drink run spreads cheer to the whole party.

Have a few friends over to your house where you can control the atmosphere, the lighting, the drinking and, best of all, determine who gets to spend the night.
Football Conversation Starter: Can the players see the clock or is it just on television?
Cheerleading Tip: Saying the same cheer over and over is annoying and not polite.

A speedy hook-up is not in the stars, but laying the groundwork for a great new relationship is. A guy you meet today will set off the chemistry.
Football Conversation Starter: Can the kicker just run with the ball if he wants?
Cheerleading Tip: If you bring pom-poms, choose a set that have no sentimental value, as they will likely get damaged or dirty.

Financially, this could be the game that makes you the winner of the football pool, so make sure you hit a big party with lots of betters. One of those sore losers might ask you out on a date.
Football Conversation Starter: Is there ever a fifth down?
Cheerleading Tip: Pick a favorite player and cheer loudly for him.

You will be looking great, but may attract too much attention to be able to selectively interview and choose the perfect guy. Dress down and ditch the losers quick.
Football Conversation Starter: Do they change their dirty uniforms at halftime?
Cheerleading Tip: Don’t play drinking games after the first quarter.

Bringing yourself to sit through a boring game may be impossible, but your imagination might come to the rescue. Pretend that your love interest’s team is trying to take your eternal soul to heaven and the opposing team is trying to keep it out.
Football Conversation Starter: Is there a way to tell what the quarterback is going to do before he gets the ball?
Cheerleading Tip: Wear team colors!