The Mars Manhunt: Mars in Libra 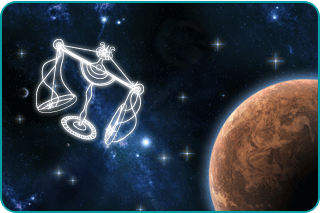 Men are ruled by the planet Mars. This ancient ruler of war is the planet of action. The location of Mars in the zodiac affects us all, but a man’s planet is going to move him a little more in one direction than the other. Would you like to know which direction? Just learn his zodiac sign. Once you know his sign, knowing where Mars is can give you a little hint about his disposition. Aligned well with his zodiac sign and the fiery red planet surges with victorious energy and passionate impulses. If the alignment is tense, Mars manifests as anger, rash decisions and brooding. Machismo and chivalry emanate from the same place in the zodiac and knowing where that ball of energy is as it circles the solar system can give a girl a decided advantage in her pursuit of a guy.

From July 29 until September 14, Mars is in the zodiac sign of Libra. This is the sign that takes the lead when it comes to partnerships. The assumption then is that while here, Mars would want to inspire a man to join in a relationship. The problem though is that Mars rules Aries, the sign opposite Libra. When a planet opposes the sign it rules, it is in a fragile state known as its “detriment”. When a planet is in its detriment, its energy is weaker and more prone to producing the zodiac equivalent of a false positive. On the plus side, Libra is a notoriously indecisive and fickle sign, allowing a woman much greater sway in a man’s thoughts and actions. Libra inspires partnerships in both men and women, but when Mars is visiting, a man’s natural active side is almost always suppressed enough to let a woman talk him into something he might ordinarily have avoided.

So find out the zodiac sign of the man of your dreams and read his forecast to see how well your words and actions can sway him your way while Mars is in its detriment.

Mars in Libra makes the Aries man especially susceptible to seductions and the power of suggestion. If you are presently with an Aries man, be careful to monitor other women around him. If another woman is after your Ram, she can successfully talk him into scenarios while Mars is in Libra that he would never otherwise dream of.

The daily ritual will make the Bull of your dreams eminently seducible during this forecast period. If you learn his daily routine, become part of it. After two weeks of this type of togetherness you will be irresistible to him if you make advances. This works especially well if he knows you from one walk of life and you suddenly join another part of his world.

Passion can be had with a simple verbal flirtation. Once you plant an idea in a Gemini man’s mind while Mars is in Libra he will not be able to get it out of his head until he actually tries it. Be careful though, as your inspiration for a fling could unleash some of his long repressed lust. Do you really want to start off as fulfilling a fantasy and wind up a September servant?

Mars in Libra is a tense irritant to the Crab and will exacerbate his already picky need for things to be a certain way. You can spend Mars in Libra attempting to soothe him or simply leave him alone until after September 14, when the Mars visit to Scorpio makes him much more interested in romance.

Are you ready for some active nights out? Mars in Libra lights up the night sky with the Lion, and Leo men are especially invigorated to go out and get their share of the attention. If you are looking trendy and are already his type, he will demand some arm candy and that alone will get you closer than the other girls to his heart.

If you have sugar momma tendencies, a hot Virgo guy will be at your beck and call. If you are more traditional and expect a man to pay the bills, the sugar daddy Virgo guys that are already in high demand will be extra generous on the dating front if you can get near one. If you are spending August outside of the big city, your chance to get to know him based on what you two have in common will seal the deal for love.

Mars in the sign of the Scales makes the Libra man as indecisive as ever. Watch for him to shower you with affection and balance all that attention on his five other girlfriends. Don’t take him calling you a different name lightly. Demand monogamy and be firm. He will appreciate the provocation and if you explain that he cannot get satisfaction anywhere else as he can from you, you two will likely partner up.

The way to the Scorpio man’s heart is through a mystical approach. Talk up his zodiac sign and see if you can cast a spell. If that does not seem to work, an invite for drinks will open him up. Ask yourself first, though, if you can handle what gets unlocked as he might want you to fully understand the concept of endurance before you two are through.

It might be more difficult to get through to your Sagittarius man, as he will have a social calendar situation that gets booked up pretty fast. It is not like you would have too much trouble getting cozy with him, it is the getting to him that might be a bit of a problem. Find where he is going to be and he might appreciate a familiar face.

The Goat is looking at too many career crises to be of any use as a committed lover. If you are in a relationship with a Capricorn man, this is the time for you to be supportive and patient as he tends to the advancement of his place in the world. By the time Mars moves out of Libra and into Scorpio he should be wrapping up the next phase of his professional life and be looking to catch up on the love he missed out on over the past few weeks.

If your sights are set on an Aquarian man, he may take off on vacation while Mars is in Libra. Can you follow him? If you are an invited guest or just happen to show up, look for passion to blossom in paradise. If you live in an area that is frequented by tourists, the possibility to seduce and enjoy the love of an Aquarian man is quite pronounced while Mars is in Libra.

While it’s usually a bit of a chore to get a Pisces man nailed down to any specific agreement, the Mars visit to Libra will be an especially difficult time to advance love activity beyond the casual booty call. Your Pisces man is in demand in the personal and professional spheres and getting his attention will not be as difficult as keeping it. Keeping things consistent will help him focus.

Mars is the ancient ruler of war and it manifests aggressive tendencies that may be out of synch with contemporary life. In Libra, the war urge is at its weakest and social civility between the sexes is at an all time height of peacefulness. If you know your man’s birthday, a call to your favorite astrologer will produce an even more detailed and accurate forecast to keep you a few steps ahead!