The Mars Manhunt: Mars in Pisces 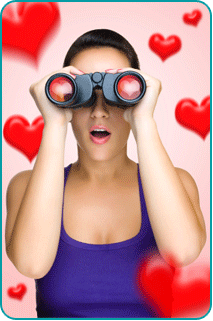 If you want a certain man and your eyes are locked in and your mind is made up, knowing his star sign will be of great assistance in your pursuit. Once you know his zodiac sign you can turn to the location of the most masculine planet for guidance. That planet is Mars.

In ancient times this planet of war ruled the affairs of men as they went out to commit the ultimate acts of aggression and territorial expansion. As we human beings have become slightly more civilized over our evolution, the desire of each man to meet up, mate and marry can be tracked by the position of this assertive red planet.

Men have a biological drive to pursue passion, and to successfully conquer the man you want, you too must be on the hunt. Your Mars manhunt begins again whenever this planet moves into a new zodiac sign (approximately every six weeks, but with many variables over the course of a single two-year Martian journey around the sun).

There are times of the year when a particular man is approachable, seducible and attainable. No matter his status, wealth and good looks, raw chemistry gives almost every girl a shot at winning his heart, mind and body. But there are other periods of weeks on end when no matter how amazing you look, nor how obvious your flirtations are to pull him closer, the connection just doesn’t occur.

It can be frustrating until you understand that his masculine drives are only intermittently focused on making out or hooking up. There are periods of time where he is obsessed with career issues and his place in the world, and love just does not factor into his consciousness. If you can wait for Mars to align well, though, you can strike before other girls who have given up on him ever notice he is back to looking at the skirts.

Last week, Mars made a big astrological move, leaving Aquarius and sailing on into the zodiac sign of Pisces. It will be in the sign of the Fish from February 22 through April 2. This is the weakest place in all of astrology for Mars. It is not a favorable time for any aggressive activity by anyone, but men especially will be confused by a sudden inhibition on their natural impulses to bound forward into action.

However, as look you for the sign of the man you want below, understand that this Mars position does not necessarily stop a man from wanting passion. Mars in Pisces can make some men quite the lover of your dreams. But traditional methods of attraction may not apply here. Read below to see how each man will be affected by this placement of Mars.

Remember, Mars in Pisces is the weakest spot for masculine assertiveness. You might have to wake him up to get him to notice you. After the coaxing, though, don’t worry about him having any more trouble playing follow the leader. Call an astrologer now for a more personalized Mars Manhunt forecast!