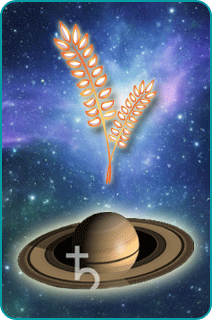 Have you been spending too much time trying to get something right instead of something finished? Your quest for perfection might be endless if it were not for an intervention in the stars. Saturn, the planet of limitations, is going to be visiting the zodiac’s sign of perfectionism: Virgo. This is a return visit for the ringed planet. Saturn usually spends about two and a half years visiting a sign and recently left Virgo to move on to Libra. Turning retrograde and appearing to move backward across the sky, Saturn will move back into zodiac Virgo on April 7 and will be there until it says goodbye for good (or actually for the next 27 years) and moves into Libra for an extended stay.

Wherever Saturn is in the zodiac, limitations occur. Because Saturn is in a sign for over two years, most people adapt to changing circumstances and learn to go with the boundaries that are being established by this plodding planet. It is when we do not adapt to Saturn’s demands that this planet turns into the zodiac’s manifestation of annihilation.

As planets move through the zodiac, they intensify the aspects of the signs they visit. Virgo is the sign of paying attention to detail and getting organized. At its extremes, this sign strives for precision and perfection. Saturn’s limiting effect when in Virgo applies to our pursuits of perfection that border on the trivial and fussy. There is an old saying, “Good delivered is better than great pending.” Saturn in Virgo punishes those who hold back delivering what they promise in order to achieve a perfection that is more likely than not just an illusion.

It is rare for Saturn to retrograde back into a sign after it has left. Consider this shirt visit to Virgo a “last chance” blessing for you to have a “do-over” on some situation in which you were recently engaged. Saturn was in Virgo from the beginning of September 2007 until the end of October of last year. Think back over that time period. If you can spot the areas in your life in which you sought a needless perfection and were rebuffed, you are about to get a chance to try again. It is time to deliver your best, flaws and all.

Saturn revisiting Virgo will allow you to focus on a workout routine in order to stay trim and in shape. Instead of making unreachable goals for yourself, this is a chance to make exercise fun and perhaps even a social event. Maybe it is a time to take a class and make new friends.

In trying to be a perfect parent or lover, you have not reached the impossible goal of being all things to all people. Saturn’s new journey allows you a chance to define your relationship with kids and with a special romance.

Your home life is in serious need of reconsideration. Perhaps Saturn’s initial visit to Virgo made the finances in your house a touchy subject – now is a better time to figure out the future. Redecorating projects that were overwhelming can be revised in a breeze.

Rigid attitudes in the way you communicate to people were to blame for so many miscommunications while Saturn first visited Virgo in 2007-09. April through July is your chance to cross some interpersonal bridges that you might have thought had been burned.

Finances have felt the brunt of Saturn’s limiting powers for too long. The return to Virgo could give you a chance to become more disciplined with your spending. A revisiting to the way you use credit could be an eye-opener as late fees and interest may be sapping you.

Saturn in your sign was a severe lesson in understanding what it was that you earned. You might have been benefitting from unstable structures, be they relationships or employment. With Saturn’s revisit, you can better see stability having been without it for so long.

Your intuition was sharp while Saturn visited Virgo, but the problem was your refusal to rely on it more. Letting the facts speak for themselves found you silenced more often than not over the past two years. You have a chance to get in touch with your hunches now. It is time to follow your gut.

Finding any way to hide from all the small talk became so difficult while Saturn was in Virgo. You might have actually gotten a little more sociable, but you will never admit that. The revisiting process allows you the chance to impress a possible lover, as you will know how to utilize some recent popularity to your advantage.

The big moment in your career has arrived yet again. You had some opportunities to make a name for yourself but may have been thwarted by details you overlooked. Recent regrets might have sharpened you up and the time to strike at the big prize has arrived sooner than you realized.

Saturn is the ruling planet of Virgo and what other people see as a limitation, the Goat knows as a methodical process of moving up in the world. Your love for a good time is legendary; the limits that Saturn set on your recreation while visiting Virgo probably taught you to appreciate the good times that can be had.

You had a good run over the past few years, enjoying the generosity of other people. But by the end of 2007, things got a bit cooler. Offers of assistance that used to be volunteered were no longer forthcoming. Saturn’s revisiting of Virgo will give you the chance to see who your friends really are.

Partnership intensity defined Saturn’s visit to Virgo. You learned the limits of what you could and could not bring to a union. Now you have a chance to add another dimension to the two of you. As your relationship grows, this is a great opportunity to add to the foundation to ensure future growth.

Keen Editorial Staff
Keen's Editorial Staff is made up of world-class writers, astrologers, psychics, and advisors with diverse experience and spiritual sensitivity.
Jupiter Opposes Saturn: The Decade Past
The Mercury Communiqué: Mercury in Taurus