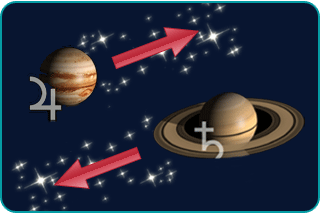 One of the great, consistent timing mechanisms in all of astrology is the meeting and opposition of Jupiter and Saturn. Jupiter orbits the zodiac in a consistent 4,331 days. That is almost 12 years. A whole orbit of Saturn lasts 10,759 days. That is just under 29 and a half years. These two wind up in the same place in the sky for about half of one year every 20 years. At the halfway point, they are opposed in the sky. Throughout the history of astrology, epochs are marked as beginning with the meeting of Jupiter and Saturn in the heavens. These eras peak ten years later at the opposition mark. Soon after, the structures that have been created in the first decade following the meeting begin to crumble. It takes these ten years to pass to see what is truly lasting from the seeds planted at the get-together.

2010 will see Jupiter and Saturn oppose each other. This gives everyone in the astrological know a chance to examine where you have come from, where you are now and to foresee where you want to go. A decade in review at present will greatly assist you in reaching your potential in the decade ahead.

Where were you in 2000? Jupiter and Saturn got together on May 28 of that year. You can draw a line in the historical sand and see so much that has changed since then. But while the planetary interactions affect the world at large, they also mark the happenings in your own life. Think back to what you were going through at that time …

The early years of this past decade were the years when you learned about money. Your current financial situation is directly related to decisions you made and strategies that you implemented between 2000 and 2001.

The conjunction in your sign of two great planets moved you to shape your future with intense planning and a commitment to following through that has yielded great results ten years later.

The decade began with a big decision to follow a path that you might not have ever seriously considered before. Ten years into your routine and the light at the end of the tunnel guides your journey still.

The spotlight glared these past few years as you were under examination, either by paparazzi or insatiably curious neighbors and relatives. The quest for privacy continues.

The chance to let the world know who you are occurred with a few chance events in the first years of this decade. As the momentum built, you were able to combine your passions with your skills to finish the decade on a stage of your own construction.

It was an epic theme for the decade: leaving your roots behind, whether by physically relocating or having your consciousness expanded beyond the point of no return. Where you stand now may be right where you stood ten years ago. And yet you are a million miles away in your mind and soul.

Someone invested deeply in you at the dawn of the decade. Despite delivering something a lot different than what was agreed to at the start of things, the investment has paid off and you have thrived because of it.

An intense partnership took hold at the dawn of the decade. It has dominated your thinking and feeling ever since. Even if it has ended, there is a permanent change in who you are that occurred because of it.

The job you have now was transformed at the beginning of the last decade and led to a ten-year ride. Despite the ups and downs, this work paid the bills, and you cannot imagine things now being the same without it.

The creative or recreational outlet you discovered at the beginning of the decade has been with you throughout. Hopefully you have been able to control it in order to maximize your enjoyment instead of letting it take over.

You relocated sometime by the end of 2001 and your entire sense of identity is now so based in this location that you would be hard pressed to move again. The decade’s roots are deep in your world.

Jupiter and Saturn expanded your status in a small community, be it a neighborhood or school. While that may be in the past, the sense of confidence you gained has stayed with you and defined your decade.

On May 23, within 5 days of the ten-year anniversary of meeting up, Jupiter and Saturn will oppose each other. While the conjunction occurred in the zodiac sign of Taurus, this opposition will take place with Jupiter in Pisces and Saturn in Virgo. Oppositions in astrology create tension here on earth. Suddenly, this summer will redefine who you are in relationship to who you have been these past ten years. Your future then will be defined by your integration of past and present. Read the coming conundrum for your zodiac sign…

Will work get in the way of your spiritual development? Will you let it?

Can you handle publicity you were not expecting?

Will working out of your home solve your boredom dilemma?

Will learning completely new approaches challenge the lessons of your childhood?

Can you make it on your charisma and hold out until the money follows?

Does Saturn in your zodiac sign mean that a bold new partnership will alter your self-perception?

Can your robust health keep you as committed to your principles and commitments, or is it time to play?

Will narcissism succumb to affection in the battle of your ego against your soul?

Would you be upset if all your dreams came true and you realized that you should have been dreaming bigger?

Is the local gossip centered on where you have been or where you are going?

Can a fabulous pile of cash keep you happy when you have no one with whom to spend it?

With Jupiter in your sign, you will be asked whether all the effort on the behalf of your partner is really worth it. Is it?