Happily Ever After: Lessons from Great Lovers in History

Home /Love/Happily Ever After: Lessons from Great Lovers in History
Love |
Facebook0Tweet0Pin0 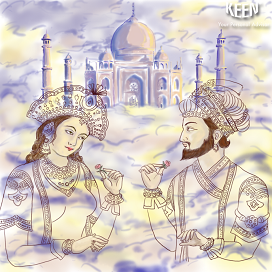 Lots of people think that “happily ever after” is an ending reserved for fairy tales, and that soul mates are a myth perpetuated by greeting card companies, matchmaking sites, and Hollywood screenwriters. But over the course of history, there have been many memorable couples that serve as living proof that sometimes, two hearts can beat as one, and though desire may fade, when love endures, passions can be reignited again and again.

What does it take to secure such an epic romance? Anyone who could bottle that particular formula would have their fortune made, but there are some takeaways from history’s most famous pairs that we all could apply to our pursuit of the perfect love, and that might make realizing that dream a little more likely. Here’s a look at some great lovers in history whose ardor for one another stood the test of time, and can serve as an inspiration to couples everywhere.

This Mughal emperor had three wives, which was the custom of his time and culture, but Mumtaz Mahal was his favorite.(1) Shah Jahan was born in 1592. His father was Jehangir, the fourth Mughal emperor of India, grandson of Akbar the Great.

According to legend, the romance began in 1607, when 14-year-old Jahan fell in love at first sight with a Persian Princess, Arjumand Banu Begum. Shah Jahan subsequently declared his love for this girl to his father. Five years later, they were married. When Shah Jahan ascended the emperor’s throne in 1628, he entrusted Arjumand Banu with the royal seal, and gave her the title, Mumtaz Mahal, or “Jewel of the Palace.”

In addition to being possessed of great beauty, Mumtaz was described by the poets of her time as wise, compassionate, and graceful–more than an ornament or trophy bride, Mumtaz Mahal was a true companion who accompanied her husband in his travels and on military campaigns, where she was counted on for her support and good counsel. It was not long after returning from such a trip to the Deccan Plateau that Mumtaz Mahal died in childbirth. Heartbroken, Shah Jahan ordered his court into mourning a period of two years.

It’s said that Shah Jahan promised Mumtaz on her deathbed never to remarry. After she was gone, he ordered the construction of what has now become one of the Seven Wonders of the World in memory of his departed wife. Twenty-two years later, the Taj Mahal was completed, and when Shah Jahan died in 1666, his body was placed in a tomb adjoining that of his beloved Mumtaz Mahal.

The Takeaway: Lasting love is a true partnership in which both parties support one another, listen thoughtfully, consider judiciously, and provide added value to the conversation. Constant one-upping, put-downs, or the need to always get your own way at the expense of the other party has no place in a romance that hopes to stand the test of time.

Brilliant scientist Maria Sklodowska left Poland in 1891 to further an education that was not available to women in her native land. After arriving in Paris, she was soon dubbed “Marie.” Sklodowska enrolled at the Sorbonne, where she was usually to be found in either the laboratory or the library. Pierre Curie, a laboratory director, quickly became enamored of the shining pupil, and began an earnest courtship.

The couple married in 1895, but theirs was a partnership that far exceeded the traditional roles of man and wife.(2) Not only were the Curies responsible for the discovery of polonium and radium, but in 1903, they, along with scientist Henri Becquerel, won the Nobel Prize for Physics for their work in the field of radioactivity.

When Pierre Curie died in 1904, Marie succeeded him at the Sorbonne, securing an historic spot as the school’s first female professor. In 1911, Marie won a second Nobel Prize (she was the first person–male or female–to do so), this time in the field of chemistry. Marie Curie’s commitment to the husband she loved and the work they shared continued until her death in 1934.

The Takeaway: Shared interests and goals give couples a strong foundation on which to build a lasting relationship. Lack of mutual interests, or the feeling that one partner is not the intellectual equal of the other, can lead to an unhappy cycle of boredom and contempt that eventually culminates in a parting of the ways.

While perhaps best known for “Mastering the Art of French Cooking,” Julia Child also mastered the art of an enduring marriage to the love of her life, Paul Child, whom she met while working as a top researcher for the OSS (the Office of Strategic Services, the predecessor of the CIA) in Washington, D.C.(3)

A commanding six-foot-two, Julia Child was never considered a beauty, but her wit, wisdom, and capacity for learning set her head and shoulders above many of her peers, and won the heart of Paul Cushing Child, while both were posted to Ceylon. Though Julia towered over her husband in physical stature, the pair was well matched intellectually and emotionally. Compared to other couples of their time, the pair, in their mid-thirties, married late.

Thanks to an extended stint  in Paris, Paul was said to have brought a sophisticated palate and a hearty appetite to the marriage. When the couple wed, Julia didn’t know very much about cooking, but eventually developed a passion for it. The couple settled in Paris and Paul began work for the U.S. Department of State.

At loose ends, Julia looked into several pastimes with which to occupy her formidable talents. It was (at least in some part) as an effort to please her husband’s discerning appetite that she began to study French cooking. However, her interest eventually developed into a true passion that both of them shared.  Although it was not always easy going, Paul always encouraged his wife to pursue her dreams. When the couple returned to America once Paul’s assignment with the State Department ended, the doting husband designed a kitchen for Julia that took into account her height, and organized it so that every pot and pan had a predetermined spot on the pegboard walls for easy access.

The love affair the couple shared with one another, and with food, lasted until Paul’s death, and would one day see Julia ensconced as one of the most celebrated luminaries of the culinary world.

The Takeaway: Couples who encourage one another to pursue passions and give it their best effort—even if the dreams don’t always materialize or fall short of the mark–are couples that truly understand the meaning of love. Couples who belittle one another, or dismiss a partner’s dreams as unattainable or foolish are couples that are likely destined to fall apart.

These couples are just a few of the many lauded love affairs–but beyond them lie many unsung couples, whose strong bonds last the test of time. By taking these lessons to heart when searching for your own true mate, you might one day find yourself numbering among them.

Do you want to find romance that will go the distance? A KEEN advisor can shed  light on your search to show you where true love may be hiding.

Facebook0Tweet0Pin0
Unraveling the Web: Psychics Offer More than Just Online Dating Advice
Ill-Starred Love: Lessons from Famous Romances Gone Wrong, And What You Can Do to Keep History from Repeating Itself