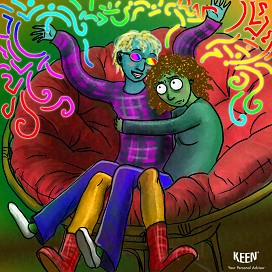 Have you ever discovered something about a new partner that made you pause? When intimacy is just beginning, you’re bound to uncover some quirky facet of your date, like an unusual hobby, questionable history, or bizarre habit. The question is, what’s the difference between a harmless idiosyncrasy and a major dating red flag?

If your partner reveals these things to you, you probably don’t have anything to be alarmed about:

• Their favorite hobby is utterly incomprehensible to you. Maybe he spends the weekend painting eyebrows on little figurines of orcs. So what? As long as he spends enough time with you and those half-inch warriors aren’t threatening your relationship, it’s great that he has a creative outlet. Would you really want to date someone with exactly the same interests, anyway?•

• They’ve experimented a lot in previous relationships. She said she was straight and monogamous in her dating profile, but you’ve learned she used to be in a polyamorous relationship with a woman. What does that mean? Nothing, really. It’s normal to try out different partners and dating styles, and experimenting with same-sex encounters doesn’t make someone gay or lesbian. If she says she’s straight and seeking an exclusive relationship, then assume she’s being honest unless you have evidence otherwise.

• They’re still friends with an ex. Plenty of people maintain a friendship with an old ex. This is only a problem if you feel uncomfortable with the boundaries of their friendship—does he cuddle with her, even though you’ve expressed you’re not okay with that kind of behavior? Does he seem obsessed with her, or not over their relationship? If you’re comfortable with the dynamic of their friendship, the fact of its existence is probably nothing to worry about.

You might want to slow down and think things over if you’re seeing these signs:

• They’re super intense about work or a hobby. You’re wondering—is it normal to work so many twelve-hour days at the office? No matter how outlandish her career habits, you’re not going to change her lifestyle. The question is, can you deal with her constant busyness? Or do you want a partner who’s more available? A relationship with a workaholic isn’t necessarily doomed, if you find ways to to get your intimacy needs met. That can take some creativity, and some honesty with yourself about your true desires.

• They’re much more or less religious than you. You think he’s a great guy, but you’re getting nervous what his religious lifestyle means for your future. If you’re a different faith (or atheist) and you’re looking to start a family, it’s normal to question the logistics of creating a household of varying beliefs. Plenty of interfaith couples have made it work, but communication about expectations and deal breakers is vital—start asking open questions to gather more information about his perspective, and if you’re getting worried, be frank about your plans for your future family. •

• They cheated in a past relationship. If your new significant other admits to you that they committed infidelity with a previous partner, it’s normal to be curious, and a little on edge. Not every cheater is the same, though. You might feel differently about someone who slipped up years into a sexless marriage versus a guy who deluded his fiancee for months. Find out more before you judge, and then decide if their transgression, and the way they handled it, still makes you uncomfortable.

The future could be pretty bumpy if you ignore these signs:

• They’re prone to violence. Your first few dates went swimmingly, but inevitably, something happened that ticked him off. The ensuing tantrum left you feeling pretty rattled—or worse, he actually lashed out in a way that threatened your safety. If you’re feeling frightened of angering him again, that’s a major warning.

• They’re battling addiction. Substance abuse is complicated—addiction, in fact, is considered by many scientists and mental health practitioners to be a disease. That doesn’t mean you have to be along for the ride, though. If you’re discovering that your partner can’t function for long without alcohol or a recreational drug, think hard about whether they’re really able to meet your emotional needs and manage a habit simultaneously. Are you okay watching your partner make potentially self-destructive choices? Couples have certainly survived addiction, but it’s not an obstacle to be taken lightly.

• They’re emotionally manipulative. Does she try to isolate you from your friends by putting them down? Does she pressure you with emotional tactics, like threatening to hurt herself, if you don’t oblige her whims? These are signs that she’s seeking control, not love. Get out fast!

When your partner reveals something shocking, it’s normal to want to ask more—and that’s exactly what you should do. Be curious, not judgmental, and learn as much as you can about their quirk. Then, ask yourself how okay you are with this new information. Of course, this list is only a guide, and if something that you think should be a Green Light instead makes your inner alarms go haywire, that’s enough reason consider it a dating red flag and back out. Sometimes, that feeling means you’ve spotted something more pernicious than a strange hobby, even if you can’t articulate it. Whatever you decide, you’ll feel glad you took the time to confront your questions sooner rather than later.

Are you questioning your partner’s unusual habits or history? A gifted advisor at KEEN.com can help you get to the bottom of murky feelings.