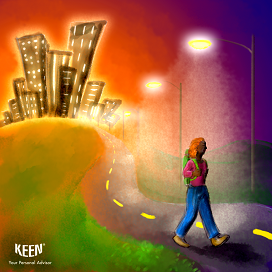 Relocating can be a grand adventure, but will your expedition go the way of Lewis and Clark, or the Donner Party? When a career opportunity calls for you to cross states or even oceans, old feelings and unresolved hurts can resurface to rain on your bon voyage. The prospect of changing homes and jobs often comes with unexpected baggage.

Let me tell you about my client Emily, 28, a food chemist living and working in New Jersey who was having just such a problem. She’d recently applied for an advanced position at a big name company operating in Hawaii, and a few days ago she’d heard back: an enthusiastic yes. They’d even cover her relocation expenses.

“This should be an easy decision,” she said. “I mean, it’s Hawaii. It’s paradise. But for some reason I haven’t accepted the offer yet.”

Surely, there was more to the dilemma than Emily was letting on—perhaps even she didn’t understand the reasons for her hesitancy. A Tarot reading would be ideal, then, to coax the shapes of Emily’s doubts into the light. Once she could articulate her fears, I sensed the right decision would become effortlessly apparent.

In my experience, most decisions that seem irrationally challenging actually represent a personal battle with our identities at stake, or a way of diverting our attentions from a more sensitive issue. That’s why a reading that incorporates old wounds and painful memories is actually ideal for a question about the future. For Emily, I gravitated to the Three Fates spread, in which the past, present, and future of a situation are each revealed by a card.

I shuffled the deck and drew the first card, representing all the events that have led up to her call. Dramatically enough, it was The Devil. “Wow, this is a pretty hefty card in the past position—it can symbolize addiction and toxic relationships. I’m sensing that it represents, for you, a tortured and prolonged affair. Emily, you don’t have to tell me details if you’re uncomfortable, but I’m sorry that you’ve been dealing with this.”

She exhaled slowly. “I’m not proud of this, but a year ago I started having an affair with my very married boss—it started out fun, and mostly harmless, I thought. His marriage was on the rocks anyway and our chemistry was just unbelievable. But then he started pulling away, and I freaked out, and we’ve been doing this on-again-off-again dance for the last four months. When I applied for the job in Hawaii we were on a downswing, and I thought it would be great to just get away. But once I told him about the offer, he got upset. I know he really cares. I hate that it’s like this, but I think he’s my soulmate. How can I walk away from my soulmate?”

“Your boss is not your soulmate,” I said, perhaps a little too quickly. “Just trust me on this one.” As an individual with empathic abilities, I perceived immediately that Emily’s boss had hurt her gravely, and many times over. There was a power dynamic, not just in their work, but in their romance, that benefited him at her expense. Of course, soulmates can do stupid, mean, and petty things sometimes (even the most charmed relationship has its squabbles), but they won’t manipulate, abuse, or play emotional games.

“I can already see why this decision is so emotionally difficult. Let’s see what’s in the present position of your reading,” I said, and laid the Five of Wands on the table. “Five young men deadlocked in a sparring match—I’d say you’re fretting a lot, but not productively.” Some worries deserve attention, but this card suggested that her mind was at war with itself over a decoy, a distraction from the real problem, which was walking away from the boss.

“You’re right that I’m feeling extremely nervous. I’ve been consulting a lot of websites about living in Hawaii, and reading reviews about the company, and they make me feel even worse! I keep imagining it all turning out horribly. How will I get my car there? The flight home for Christmas will be unconscionably long. I have a mild pineapple allergy, too, and they’re bound to be everywhere.”

“Those are all real possibilities, Emily. But, those worries are just helping you feel productive without confronting the deeper issue. I sense that they’re also a manifestation of your doubts about permanently ending the affair: if you can’t go to Hawaii, then you get to keep hoping things will work out between you and the boss.”

The last card I drew was The Empress, the matriarch of the Tarot. “Do you think that’s my boss’ wife?” Emily surmised.

“Actually, I think it’s you. Or at least, a part of you. This is a woman who is compassionate and generous, but above all, self-possessed. She’s fair, but protects herself and her interests with quiet and regal confidence, because she has strong boundaries: not a defiance of other’s opinions, but the ability to withstand a whirlwind of voices and come out feeling authentic. Can you imagine her? What does she want?” I sensed that Emily was fighting a lot of inner—and outer—critics, including her boss, that told her to stick it out with their relationship. But these voices, although useful to an extent, can overrun inner wisdom, which tends to be soft-spoken and unassuming.

“The Empress wants to go to Hawaii. She’s done with the affair,” said Emily quite suddenly, and with a new air of assurance. Then her voice softened.  “Did I say that out loud?”

Wherever You Go, There You Are

After that revelation, our conversation wrapped up fairly quickly. Emily felt certain that her relationship with her boss wasn’t emotionally charged because it was meaningful, but because of the on-again-off-again drama and the unfulfilled promise of a happily ever after. She felt ready to move on, literally and figuratively.

When we’re thrown out of our geographic comfort zone, our emotions can get jumbled out of order, too. Sometimes, that’s just what we need to break free of old, exhausting habits and clear the air for new growth. I’m certain that Emily, who finally understands how her affair was painful and addicting, now feels liberated in innumerable small ways—free enough, at least, to kick off her sandals at her new address in Maui.

Are you questioning a big move? A Tarot reading from a KEEN advisor can help put your concerns in perspective.

Keen Editorial Staff
Keen's Editorial Staff is made up of world-class writers, astrologers, psychics, and advisors with diverse experience and spiritual sensitivity.
Is Your New Partner’s Quirk a Dating Red Flag?
The 7 Chakras: Heal the Body and Soul with Natural Energy Centers