Poker Tactics to Land a Man 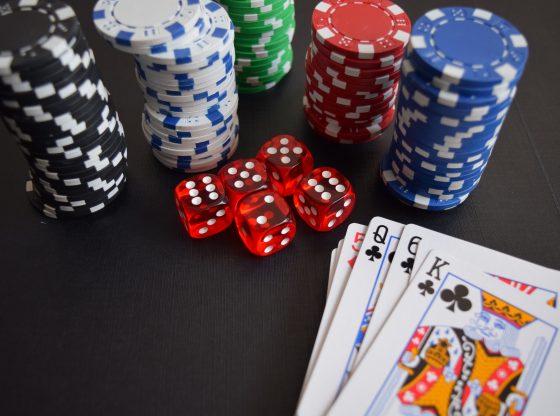 When you are starting a relationship with a guy, a lot of tension is caused by hoping for a good outcome. Your head can be filled with many questions that just cannot be asked, as they reveal too much about what you are thinking and how you are feeling.

Love can be a lot like the game of poker. Consider the jackpot of chips to be the guy with whom you want to partner up. There are other girls out there competing for that jackpot. But just because they are interested is no reason to fold your cards and walk away from a potential win.

Look at your attempts to land a man as a poker game and look at the women circling him as your opponents. Are you his type and do you know that you meet some of his qualifications? This is like being dealt a strong hand. But in love as in poker, the strongest hand is an advantage, but no guarantee of winning against a more skillful player. The girl who looks like she would not have a prayer of ever landing a great catch of a guy can (and often does) walk away with him in the end. She does this by playing it cool at some points in the game and taking risks at other times. Just like a poker pro, studying her opponents in the battle for his affections can inform her of not only her chances, but of when to make her move.

Every woman knows that even when we are down and out in love, venting about it should be done in private with a close confidant. To appear unscathed by rejection and unaffected by the victories of our rivals – this is a strategy at the card table – when you are dealt a losing hand, never give an indication that you are suffering or weak. Your strongest rivals may bow out early if you look unaffected by what has been dealt.

In poker, opponents often unwittingly give signals to the veteran card player. This is called a “tell” and the ability to spot tells from your opponent is what separates professional players from hobbyists. If you are serious about a guy, be on the lookout for the most casual remark by a woman who might be after him as well. A pro poker player notices an opponent who looks too long at his stack of chips and knows that a risky move might be coming. If you notice her making time to be around him, this tell can put you into action to find a way to distract him from going to the place she thinks he is visiting. The littlest behavioral information about your opponent can give you a big advantage in the game of poker and the game of love.

In poker, some people stay in the hand too long. When the cards are dealt, we can imagine the perfect hand being formed later in the game. Often a player is overcompensating for a weak hand by imagining possibilities of a winner that are statistically quite rare. As the hand progresses, it might appear that we are getting closer to forming a winning hand. “Chasing” such a hand requires progressively betting more and more of our chips on our internal illusion of what is, in reality, a long shot. When the hand is over and everyone shows their cards, the person who was chasing a long shot is left watching all of their dreams and effort slide across the table to a player who had made a better, lower stakes hand. In the game of love, many women become delusional about the possibilities they have with certain “dream catches.” If he is a doctor or businessman and smiles at you, the fact that you two come from different worlds might sound romantic in a movie. To expect the same results outside of the movie theater in the real world is delusional. To invest your emotional energy in trying to capture a guy out of your league is dangerous, as being left with nothing after many months or years of “chasing” can leave you devastated and bitter. Pursuing a royal flush with two cards and a prayer hardly ever works in poker, and even less often in love.

When you do not have the best hand in poker, you can still win. You can bet like you have a strong set of cards and hope your opponent folds her cards and walks away from the pot of chips in the center of the table. Perhaps she has a tell that you can spot that lets you know she is not too committed to her cards. Maybe you realize she is “chasing” and will defer her dream when you bet with confidence. When pursuing a passion partner, understand that he is sizing up his options for how they complement his life. Bluffing can involve emphasizing the parts of yourself that most accentuate who he is and leaving out references to the things about you that are not important to the task at hand: getting his attention, followed by his commitment.

There comes a time in some flirtations when you realize that it is time to make your move. In poker, there comes a time when you may have bet too many chips or are a little fearful of the strength of your opponent’s cards. You don’t want to give up, but you don’t want to let your opponent stay in the hand, and so you “go all-in.” What this means is that you bet all of your chips in the hopes that your opponent either folds their cards or ends up with a weaker hand than you. In the game of love, there comes a time when you might have to make a dramatic lunge at the man of your dreams. Going all-in (note that it’s “going all-in”, not “going all the way”) can be risky; if your opponent thinks her chances at landing him are strong she will make her move as boldly as you did. But the sight of you in his arms could make her politely fold her cards and go off looking for someone else, leaving you two alone to enjoy the jackpot of a new relationship.

Keen Editorial Staff
Keen's Editorial Staff is made up of world-class writers, astrologers, psychics, and advisors with diverse experience and spiritual sensitivity.
Why Do Men Prefer to Stay Single?
Best Friend, Love Saboteur