The Cassandra Principle: How Denying Psychic Warnings Can Result in Tragic Consequences 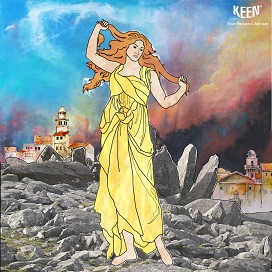 One of the most enduringly tragic characters from the annals of Greek Mythology is the prophet Cassandra, daughter to King Priam and Queen Hecuba of Troy. Gifted with the power to foresee future events unfold, Cassandra was also burdened with a curse—no-one believed any of her predictions. So, while she accurately prophesied a series of events that would lead to the deaths of those she held dear, the destruction of her parents’ kingdom, and eventually, her own demise, without a voice (at least in the figurative sense), she was powerless to prevent or alter the course of fate.

There are several variations of the myth with regard to how Cassandra received her gift. The most popular version posits that the Greek God Apollo was so enamored of her charms, that in an attempt to seduce her, he granted Cassandra the power to see into the future. Cassandra, however, did not find Apollo particularly appealing, and spurned the deity’s unwanted amorous advances. Being a god who considered himself generally irresistible to those of the feminine persuasion, Apollo didn’t take rejection lightly, and in anger, spat in Cassandra’s mouth, which, in addition to being totally gross, sealed his curse upon her that nothing she prophesied would ever be believed.

There’s also Aeschylus’s more misogynistic telling of the tale in his classic tragedy, Agamemnon, in which Cassandra, cast as a quintessential tease, promises Apollo sex (or to bear him a child, depending on the interpretation) in return for the gift of prophecy, but reneges on the bargain, so the god gets even, not by taking the gift back, but by turning it against her.  Having rendered him impotent in love, he rendered her powerless in everything else. Cassandra’s predictions were dismissed as without merit, no matter how accurate they were.

In yet another version of the story, Cassandra, a Pythian Priestess at the Temple of Apollo, fell asleep on the temple floor, whereupon certain magical serpents beset her, kissing and flicking her ears with their tongues, and when she awoke, she was imbued with psychic powers. Why Cassandra was disbelieved is less clear here, since there’s no direct curse involved, but perhaps it can be ascribed to the origin of the gift. While snakes are symbolic of many things from fertility to immortality, they are often associated with the demonic.

Ironically, Cassandra’s twin brother, Helenus, was also said to have possessed considerable psychic abilities that were taught to him by his sister–but people actually believed him, and acted on his predictions to their benefit. As a result, Helenus was not considered a tragic figure, which is why you don’t hear about him all that much, except as a footnote to the more central characters in the dramatic tales of death and destruction.

Breaking the Habit of Disbelief

In ancient Greece, belief in prophecy was part and parcel of everyday life, but in modern times, many of us have been acculturated to disbelieve. We are taught that gut feelings, intuitions, premonitions, and the psychic messages some of us receive from sources lacking rational explanation can be written off as a form of self-delusion, despite a preponderance of evidence to the contrary.

That’s because, unfortunately, this “evidence” cannot always be taken at face value. Since the existence of supernatural and psychic manifestations cannot truly be qualified, quantified, or verified by tangible means of science, they have been historically manipulated or mimicked by unscrupulous parties for monetary gain. Pseudo psychics and false mediums took a huge toll on this once highly regarded calling, and yet, the profession has never fully fallen out of favor, since there are always going to be those who refuse to accept that just because you can’t explain something rationally doesn’t mean it isn’t real.

To Believe, Or Not to Believe?

Choosing whether to believe in psychic powers is certainly a personal decision. There’s absolutely nothing wrong with living in a world predicated mainly on fact-based reality, however to deny the presence of more arcane forces seems shortsighted, at best. One of the main reasons humans learn to trust the five senses has to do with survival: You see a car veering toward you on the wrong side of the road and steer out of the way. You hear a train coming and know not to step onto the tracks. You feel the heat coming off a frying pan and know not to touch it. You smell fumes or smoke and are warned of impending danger, hopefully in time to escape.

It seems to follow that learning not only to listen, but trust our “sixth sense” would be in our best interest as well. Cassandra may have only been a fictional character, but that doesn’t mean we should ignore the major takeaway from her tale. Seeing and acting on a premonition or instinct guided by a sixth sense has been proven time and again to have the potential to keep you on track for a happier destiny, while ignoring psychic visions, especially accurate ones, can end in tragedy.

If you don’t want to ignore the psychic tidings that can impact your future, why not let a trained and trusted KEEN advisor help put you better in tune with the infinite?

Keen Editorial Staff
Keen's Editorial Staff is made up of world-class writers, astrologers, psychics, and advisors with diverse experience and spiritual sensitivity.
Understanding Rivalry with the Tarot
Psychics in New York