Understanding Rivalry with the Tarot 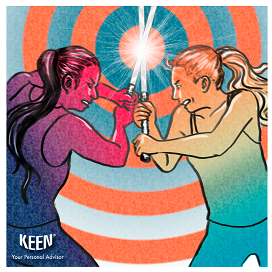 Mozart and Salieri. Betty and Veronica. Coke and Pepsi.

Rivalries drive you to work harder, longer, and better, and most of the time, that little kick in the pants is a welcome push. But competition has a dark edge, too. It’s addicting, and when you’re in too deep, it threatens to consume your thoughts around the clock. How can you handle the rivals in your love life and career without losing your mojo? The Tarot has a few thoughts. Each card in a spread can represent something about your rival. What motivates them? How can you get the upper hand? Is it even worth your time? Here are five of the deck’s toughest adversaries, explained.

The Emperor craves power and a title more than anything. He’s not above ruthlessness, but only as a last resort—he wouldn’t besmirch his reputation just to get ahead! If you’ve been butting heads with an Emperor, it’s because he senses his coveted position atop the hierarchy is under siege. Because the Emperor is uncompromising, you’ve got two choices: surrender, or usurp him. Sometimes, surrendering just means letting him keep the illusion of power. Think about Dwight Schrute in The Office, a character that lusts after authority, but is easily pacified by an honorary (and totally worthless) Fire Safety Marshal title. Then again, when you’re grappling over a coveted place on the corporate ladder, you can’t just invent a fake position— you’ll have to depose the ambitious Emperor somehow. He’s most likely to fight you with strong-arm negotiation tactics and intimidation, so draw on your wits and charm to surpass him.

The Page of Wands is an up-and-comer who wants to make a name for himself. Which would be fine, really, if he weren’t encroaching on your territory. For years, you’ve been the funny one in the group, or the fastest number cruncher in the office, and now he’s here doing your schtick. Only younger, and perkier. You could make an enemy out of the Page of Wands, but that’s likely to backfire and leave you looking like a bitter and washed-up scrooge. You’ll find much more peace when you remember that the Page of Wands emulates you because he worships you. He wants your approval, so offer to be his mentor. When you become the teacher you always wished you had when you were in his shoes, you’ll build mutual respect and reap some serious karmic rewards.

The Queen of Cups is the romantic rival you deserve. Her gorgeous eyes are fixated on the object of your affection, but unless you’re polyamorous, only one of you will get the guy. She’s pretty and as nice as a kindergarten teacher, which leaves you feeling like an evil trollish fiend by comparison. But widen your view, a little, and you’ll realize that you are on her level! Rivalries only happen between equals. If this were an easy contest, there wouldn’t be a love triangle brewing. Want to win the guy once and for all? You’ll never get the Queen of Cups to play dirty, so don’t even think about it. Be honorable and kind, and wait to see how it plays out. Who knows, the two of you may even ditch the guy and become best friends.

The Four of Pentacles is a deeply insecure guy. Maybe he grew up in a home where money was scarce. Maybe it wasn’t a drought of dollars, but parental affection that makes him stingy. Wherever in his psychological history the scarcity started, he’s still living like the sky’s going to fall tomorrow. So he tries to prove he has more, makes more, and knows more. Desperate to flaunt what he’s got, it’s easy to forget how vulnerable this fellow really feels. But when you play ball and one-up him, the fear at his core only burns brighter. To end this tiresome rivalry, you’ll need to do something absolutely radical: give him a compliment. Yes, his new RV really is full of enviable features! Wow, it sure is wonderful that he got that bonus. Yep, his Facebook-feed invading baby sure is cute.

Seven of Swords is a wildcard rival to watch out for. Self-serving and cowardly, the Seven of Swords will make a move on your long term relationship partner, broker a business deal without you, and discredit you with rumors. Deception is all in a day’s work for this morally bankrupt competitor. Whenever you find yourself against this character, don’t fall to their level. You probably don’t have the complete lack of empathy required to pull it off as well as them! You can root them out once and for all by exposing their treachery and displaying it for all to see from atop your moral high ground. A word of caution: trust your intuition and don’t underestimate the Seven of Swords. They’re not bound by the same rules of conduct you hold dear.

Whatever sort of opponent you’re matched against, it helps to remember that rivalry is neither wrong nor right at its core. Some rivalries offer the potential for friendship and growth. Others can drain you and leave you bitter. It’s up to you to know when to advance or retreat, ante up or back out. A tarot reading by a gifted psychic advisor can illuminate the difference between healthy competition and ruthless warfare, so you can choose the course that’s right.

Are you up against a tireless adversary? Can’t figure out how to vanquish them once and for all? KEEN advisors know the answer.

Keen Editorial Staff
Keen's Editorial Staff is made up of world-class writers, astrologers, psychics, and advisors with diverse experience and spiritual sensitivity.
In a Love Triangle? Guidance from the Tarot When Romance is Complicated
The Cassandra Principle: How Denying Psychic Warnings Can Result in Tragic Consequences