How Angels Can Assist You With Everyday Problems

Home /Psychic/How Angels Can Assist You With Everyday Problems
Psychic | 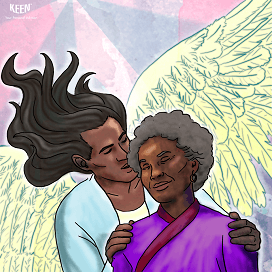 Eleanor was an older client who came to me with a desire for healing. She had a fairly strong religious background but felt guided to work with me based on the recommendation of a mutual friend. Still, she was afraid at first and just wasn’t sure what to expect. During her first session, it became clear that the best way to work with Eleanor was to call upon an archangel to assist with her emotional healing. Choosing this method would make her feel more comfortable and let her subconscious mind know that this was okay.

James, by contrast, could not have cared less about any kind of celestial being. He was a frustrated writer who wanted to understand how to shift the blocks and limiting beliefs in his career. He was surprised when, during our session, the archangel Gabriel appeared to me with guidance for his work as a writer.

Angels and archangels are often present in my work as a psychic or healer, even though I don’t call myself an Angel Practitioner. These divine beings are capable of assisting anyone—regardless of religious belief. And while many people believe that angels are only available in moments of crisis and life or death situations, this isn’t true! These pure, powerful beings are available to work with us on the small challenges of life as well and are committed to assisting every one of us in accessing our divine nature.

Eleanor had some fairly deep emotional wounds stemming from the death of her mother at an early age. She had prayed about it and tried conventional therapy, but the next step was to release her mother from her energy field. I explained that this would not be painful to either her or her mother, and would, in fact, create release for both of them. Her mother had been an earthbound spirit attached to Eleanor since her death when Eleanor was seven (she was now 59). Eleanor quite rightly wanted to feel alone in her own energy body but also felt guilt and fear.

As we began the session, I called in archangel Michael to help with all levels of the release and guide Eleanor’s mother into the light. To her surprise, Eleanor could feel the presence of this divine being and even see him in her mind’s eye. She was delighted in the angel’s presence and was able to “follow” the healing energetically as her mother was released. Together, we created a daily prayer to the archangel Michael to continue the healing process.

James’ situation was typical of the way angels often appear during my readings: Gabriel appeared without me summoning him, but he had a message for James, and I was happy to transmit it.

The angel wanted James to know that he was forgiven for a certain situation that had occurred during his teenage years. James broke down in tears when he heard this; he hadn’t consciously related this experience to his writer’s block, but once the idea was presented, he quickly made the connection. Gabriel encouraged James to release the guilt he was carrying and ask himself if he was truly working on the writing topics that were most important to him.

James left the session feeling a little bemused, but he emailed a week or so later to tell me that he was amazed by the appearance of a being he didn’t even believe in. He had worked on his own self-forgiveness and realized he wanted to write in a completely different genre from the one he had been struggling with for years.

There is an impressive hierarchy of angels, and although I work with the archangels and guardian angels of my clients when they appear, I don’t pretend to be an expert in this field. But what is most important to remember is that there are so many celestial beings who wish to aid humans. Whether you believe in them or not, they are available to you! I invite all my clients to explore the angelic realms and see if it resonates with them as a way of receiving guidance. Whoever you are, and whatever your problems, the angelic realm is open to you.

Would you like to work with angels? Hear guidance from these divine beings? An advisor on Keen can help. Call today and begin experiencing the loving support of the angels!

Keen Editorial Staff
Keen's Editorial Staff is made up of world-class writers, astrologers, psychics, and advisors with diverse experience and spiritual sensitivity.
How Much Will My Psychic Reading Cost?
Moon Phases and Love: Planning your Dates By the Light of the Moon