Waxing and Waning: How Can Psychic Abilities Change Throughout Your Life?

Home /Psychic/Waxing and Waning: How Can Psychic Abilities Change Throughout Your Life?
Psychic | 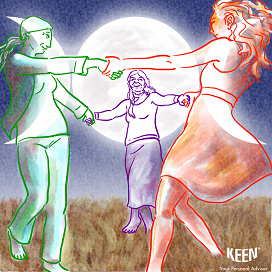 When Jillian, a 31-year-old financial planner, called me for insight into some office politics, I wasn’t expecting to get into a discussion about her own psychic abilities. It all started with something troubling she said: “You know, I wish I could do what you do. I used to be pretty sharp, when I was a girl, but I just can’t do it anymore.”

I asked her what she meant, and she elaborated, “I remember being able to sense things—spirits, this man that I think used to live in my old house, in particular—and I just knew when something was about to happen. I had this uncanny hunch right before my father got laid off, and that same sort of hunch before my grandmother passed on. It was like someone was feeding me a line of information. But now, I can’t seem to do it anymore. It’s all gone.”

Jillian’s lament is surprisingly common. In my experience, nearly everyone has some innate capacity for extrasensory perception. Some call it intuition, others call it luck, and those of us who hone our gifts into a profession call it a sacred gift. Like most other abilities, I believe that practice helps us all, although certainly some are born with a head start. Jillian’s recounting of her childhood suggested she was one of those uncommon few. Unfortunately, she’d all but lost touch with her powers.

Psychic abilities do change throughout our lives, just as our voices deepen and our skin wrinkles. In fact, there are times when our powers are most fertile and accessible, and times when they feel so distant, we lose hope they’ll ever return.

What Causes Us to Lose Our Psychic Abilities?

The predominant causes of declining psychic abilities are mistrust and lack of use. When we actively try to quash our insight and powers, or discredit them as pure chance, we are telling ourselves that this is sort of thinking is trivial and fruitless. It’s easy to start down this road of negative self-talk, since our culture raises us to ignore intuition. We’re told that a neighbor who gives us the creeps is actually a very nice man (“How could you say such a thing?” your mother asks), and we’re told that our emotional urges (a lumped term that often includes unnamed psychic abilities) are beneath our rational reasoning. These messages lead most people to ignore their gifts. Without training, they never have the opportunity to flourish.

There are also times in our lives when we may be naturally out of touch with our powers. This may be through the simple juxtaposition of astrological omens or the alignment of incomprehensible energies; myself, I believe many of us are deeply in tune with planetary forces down to the motion of tectonic plates. It is impossible to make a sweeping conjecture as to why or when this will happen, as everyone’s “worst season” differs, but the experience is nearly universal. Fortunately, there’s a flip side: you’re often just as likely to experience psychic highs, seasons when your powers explode to a new zenith seemingly without cause. I’ve read for people who spent weeks or months living a miraculously charmed life, with all their career and love problems suddenly resolving as if by divine intervention. They often report having that same feeling Jillian described, that they were being fed information by an inside observer. Then, just as quickly as this remarkable stage began, it ends. What I’ve noticed is that the people who enjoy these halcyon days work to listen carefully to their inner voices and aren’t afraid to acknowledge their metaphysical hunches.

When Are Psychic Abilities Greatest?

Many children display a knack for prediction. They can cut to the deepest meaning of an interaction, often calling adults out on their most hidden desires and motivations. They play with imaginary friends (who, as many psychics know, are not always delusions) and express a curious compassion for even the darkest spirits. Although it’s not an especially realistic portrait of a haunting, the film Poltergeist gets one detail very right: the star, a little girl, senses a menacing spirit before the rest of her unwitting family—and greets the visitor with a smile. Children lack judgment and shame, and their acceptance of others (even others beyond the grave) is boundless. Likewise, they accept their own gifts and inner knowledge without question. It is only as they age that they begin to take the doubts of others on themselves, and their connection with these psychic insights wanes. This is certainly what happened to Jillian: as a financial planner, her life became about guarantees and certainty and logic. This satisfied the part of her mind that is deeply analytical, but squeezed out all her inexplicable hunches.

It is also my experience that older adults reconnect with their innate abilities somewhat organically. Perhaps it has taken them decades to fully accept and honor their true selves, or is the reward of many years of practice. It may even be something more supernatural, a connection with the spirits on the other side that deepens as friends pass on. All that’s certain is, the literary archetype of the wise old woman is not without a solid grounding in the real world. Perhaps Jillian can expect a natural resurgence of her abilities in the coming years.

Wherever you are in your life cycle, your psychic powers are never static. They wax and wane with natural forces, and thrive or dwindle according to the mental environment you create for yourself.

Do you wonder about your own psychic abilities? A KEEN Advisor can answer your questions and help you cultivate your powers.

Keen Editorial Staff
Keen's Editorial Staff is made up of world-class writers, astrologers, psychics, and advisors with diverse experience and spiritual sensitivity.
A Creative Boost to Supplement Logic: The Intuitive Benefits of a Tarot Reading
What is Remote Viewing? The Government’s Secret History of Psychic Research