A Creative Boost to Supplement Logic: The Intuitive Benefits of a Tarot Reading 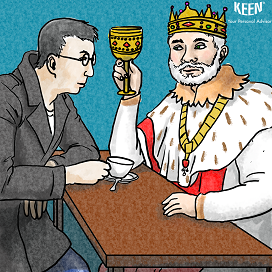 Could Tarot cards ever be as useful as a spreadsheet or as clarifying as a list of pros and cons when you’re making a big decision? As a professional reader, I’m a little biased—but you might be surprised to know that many of my clients aren’t your traditional metaphysical types. The Tarot is, for plenty of people who aren’t tuned in to psychic assistance in other areas of their life, a creative problem-solving tool.

My friend Dan is a great example—in his mid-thirties, he’s a successful web developer operating out of San Francisco. We were catching up on the phone one day when he mentioned, somewhat sheepishly, that he was considering leaving his company.

“Wow, Dan, that could be fantastic! What do you have in mind?”

He told me about a phone application he’d been toying with on his weekends (I can’t divulge his plans any more than that, or I wouldn’t be a particularly good confidant, now would I?). In fact, Dan had been on the fence about going solo for almost a year. He told me all the research that had gone into his yet-unmade decision: watching other startups, reading up on investors, honing a pitch, drafting a budget, and assessing the market for his app.

“I don’t know, it’s just such a risk. I’m not sure this is going to work. I need to do some more thinking.”

“Dan, it sounds like you’ve planned this thing to death. Could I offer you a Tarot reading? I know it’s not your thing, but maybe a little perspective from somewhere else could clarify the situation.”

“You know I don’t believe in fate,” he said warily.

“I’m not trying to tell you the future of the stock market or anything. A lot of my clients just need a creative boost, something to unlock their own intuition about a tricky problem. Most of them have been stuck for a long time, relying solely on logic. They get trapped in their own heads. Nine times out of ten, Tarot readings reveal the sticking point. It shows them what they need to do to get moving.”

He cautiously agreed to a reading, and I kept it simple—no Celtic Cross, just a three card spread. Dan’s first card was the Two of Swords, a dreary-looking image of a blindfolded woman holding two crossed blades. “Well, Dan, your first card says you’re paralyzed.”

“Wow, how did you ever know?” he joked. Of course, I hadn’t expected Dan to hop on board the Tarot train easily.

“Hold on a second—it’s not that simple. You’re struck, but not because you don’t know enough yet. You know everything about this problem. There’s no shortage of planning or numbers, no, the trouble is you’re facing a real risk. This card’s all about being forced to make a decision that offers no secure answers—the crossed swords represent a complete standstill in a situation, and the fact that they’re wielded by a blindfolded woman suggests you’re cut off from the information you seek. And that sounds a lot like your situation. You want to know beyond a shadow of a doubt that your startup will take off, but the market is always moving, always shifting under your feet, and you’ll never be able to pin it down. Just like the girl on this card, you’re blindfolded, and you’re never going to find the security you desire. But that’s not because you haven’t run the numbers enough times, it’s that you can only plan so much. Your startup is a risk, by its very nature. Sooner or later, you have to back down, or take the leap.”

“It’s The Hierophant,” I said. “This is a card of orthodoxy, of living within predefined structures. A life that follows the rules. It means you’re afraid of stepping out of line, of incurring the wrath and judgment of the powerful people in your life. Maybe it’s your parents, or your boss, that you don’t want to disappoint. You’re terrified of what will happen, what people will think of you, when you leave the company to pursue your own dreams.”

He went silent for a few seconds. Right as I was about to ask if he was still on the line, he said, “That does sound true, actually. I’m mortified of ending up with a failed business on my hands. I’d look so stupid. Everyone at work would think I’m just the most delusional screw-up, especially my boss.”

“That’s really understandable, and normal. Let’s see what your last card says.” This time, I drew the Knight of Wands. “This card represents a person, someone who’s young and passionate and very skilled at what they do. It could be you, but my hunch is that it’s actually someone else—a partner, perhaps someone who you haven’t met yet, but who will become your friend and equal throughout this process. The two of you will have a chemistry that really pushes the potential of your startup to a new high.”

“It would be nice, to have someone else on the team. At least, to share the failure with, in the worst case,” Dan admitted. “But I don’t know who. It sounds great, in theory, but I don’t know anyone I’d want to split this with.” We talked for a little while longer, clarifying some of his questions about the reading, and then I didn’t hear from him until a few weeks later.

After his reading, Dan had started attending networking events around the Bay Area, and sure enough, he clicked instantly with a software developer who had experience working on technology related to the app. They met a few more times and agreed to work together on a prototype, which they’ll present to a panel of investors in a month. If that went well, he planned to leave his job to work on the startup full-time. He was feeling optimistic and motivated, although in typical Dan fashion, still cautious. “We’ll see how it goes,” he said. “No promises—but, you know, I think this could work.”  He even asked for another reading to help prepare for his upcoming pitch.

I’m pleased to say that Dan’s story isn’t uncommon, and it just underscores my personal wish: that everyone knew how “normal” it is to consult the Tarot for guidance.

Are you struggling to make a decision about work, life, or love? A tarot reading from a KEEN advisor can illuminate the situation.

Keen Editorial Staff
Keen's Editorial Staff is made up of world-class writers, astrologers, psychics, and advisors with diverse experience and spiritual sensitivity.
What is Kabbalah? 2000 Years of Mysticism Explained
Waxing and Waning: How Can Psychic Abilities Change Throughout Your Life?