The Number Four Cards of the Tarot 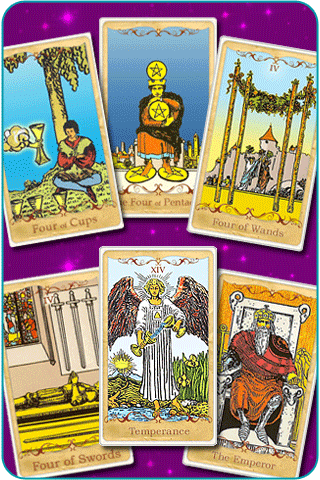 When things are stable in your life, expect to see some cards with the number four on them in your Tarot reading. This is the number of stability and consistency. There are four suits in the Tarot deck and four seasons on earth. This natural order of things is often disrupted for short bursts, but it is more likely to trend toward constancy than maintain any of the disruptive energy.

Revolutions do not occur under the four, but they may be inspired by the long uninterrupted stasis that underscores it. The timeframe starts as a comforting security and consistency, but it can manifest as boredom, stagnation and resistance to change out of a fear of the unknown. For every side of the four that is peaceful and grounded, there is a shadow side of avoidance and outgrown attachments.

Fours are ruled by The Emperor. This card is number four in the Tarot’s Major Arcana. Number fourteen is Temperance, the card that translates The Emperor’s rule over territory and over others into a rulership over one’s self. You are given full responsibility for your behavior when this card appears.

The Four of Swords is a card of waiting for the moment to strike, secure in your knowledge, confident of your point of view. The Four of Wands illustrates the solid bonds of a relationship that will last throughout the years. Stable finances, albeit at the cost of enjoying what you have, is the subject of the Four of Pentacles. The Four of Cups details a moment of not accepting love or the advances of someone promising emotional bonding.

All of these cards have, at their very root, staying the course. There is no rocking the boat with a Tarot card numbered four. There is, in fact, neither boat nor sea. This is a number indicating solid ground.

A Tarot reading that has more than one four card definitely brings up issues of stability, consistency and perhaps even a warning of stagnation. When the cards are dealt at the beginning of your reading, each one is placed into a past, present or future position. When a card numbered four is placed into the past position of your reading, this is a signal of a childhood that was peaceful and secure. If this refers to the recent past, perhaps it indicates an untroubled relationship or a balanced life of late. A four card in the present indicates that you have reached a plateau.

Sometimes after years of struggle, stress develops when longtime goals are met and things have become easier. Without the daily tension, you might be left wondering where the trouble in paradise is going to come from. The future position is a great place to see a Tarot card with the number four on it. When one lands in this position, you can look for a calm and constant outcome to your overall situation.

In conclusion, any card with a four in it makes your Tarot reading a little less dramatic and pulls the ultimatums back from challenging you into immediate action. Think of where things are firmly established in your world and you will see the four cards of your Tarot reading reflected back at you.

Keen Editorial Staff
Keen's Editorial Staff is made up of world-class writers, astrologers, psychics, and advisors with diverse experience and spiritual sensitivity.
The Number Three Cards of the Tarot
Are the Tarot and Astrology Connected