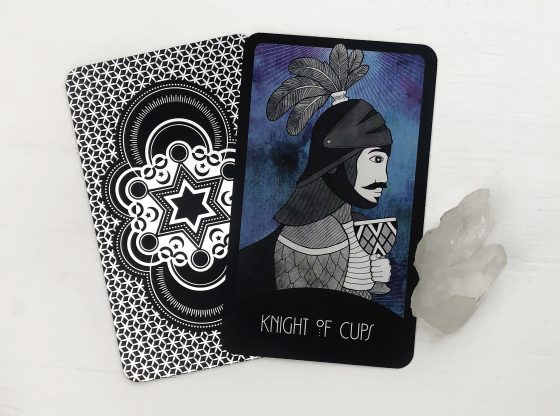 A reversed court card from the suit of Cups can mean that feelings are blocked or shut off, particularly with regard to a person. Specifically, the Knight of Cups reversed is an indicator that emotions, friendship, companionship, and support are not as they seem, though this isn’t necessarily a bad card.

When upright, this court card usually indicates a younger fair-haired man who could be a teen or young adult. Some interpretations have the Knight of Cups as a child or an older man who seems or acts younger. The card can also represent a female in some interpretations, though it’s usually treated as a man; pages or princesses more often represent women.

As a person, the interpretation of the Knight of Cups can go a few ways. Upright, he can be a chivalrous, polite, sensitive man — the young knight on the gentle horse — or he can be a good friend, someone who is supportive, nice, and friendly.

The meaning of the card can also be a concept, rather than a physical person. In this case, cups are emotions, and knights tend to be a source of action or inaction. So, the Knight of Cups indicates action or inaction regarding feelings, love, and support. The action or inaction can be good or bad depending on surrounding cards.

Upside Down and Seeing a Frown

A few interpretations make the person side of the card’s interpretation rather fickle when upright. However, that can also be a reversed interpretation. When a Cups court card is reversed, you could be looking at action or inaction on feelings in the wrong way. Maybe Person A likes Person B but is too chicken to say anything, thus missing an opportunity (inaction). Or, Person A likes Person B and says something at the wrong time or in a tasteless way (action). You could also encounter blocked feelings, like someone emotionally closed off, or a lack of support from people, especially men.

What this card really tells you is that some sort of support or emotional bonding is not going to be as it seems or as you expect it to be. For example, if you have a reading done about what your new neighbor will be like, a reversed knight of cups could indicate someone not very friendly. He doesn’t have to be mean; he just might not be as outgoing as you were hoping. Or, you could find that there is something about him that just rubs you the wrong way.

Court cards can indicate actual people, so a reversed Knight of Cups could mean that someone resembling him could be a concern. This doesn’t necessarily mean the person will be dangerous, just that there will be something off, something that doesn’t mesh.

It may also indicate energy you don’t need at this time. Let’s say you have a reading about starting a new phase in your life. If you are looking forward to moving to a new place, being independent, and handling things yourself, there could be an element in your new environment that is annoyingly overprotective or infantilizing. There is something blocking or changing the type of support you thought you would have.

Cups are associated with the element of water, and there is a small indication of trouble relating to water if you pull the card reversed. However, that has more to do with getting a reversed Cups card, rather than a reversed knight card. It’s something to keep in mind if the reading seems particularly weird, or if your question isn’t really related to people and you can’t figure out why this court card suddenly showed up.

And, it is possible that it indicates some type of trickery – cheating, stringing along, that sort of thing – though it could be on either his or your part. Maybe your partner is fine, but you get distracted by a gorgeous blond dude and risk becoming unfaithful (if you’ve also pulled the Lovers card, that sort of angel-or-devil choice is a solid possibility). Or your partner turns out to be a player. Remember that the cards don’t always give straight predictions — they are often a tool for self-analysis, bringing forth issues that help you think through a situation. If you pull this card, just hang back and do more observing.

Don’t get too hung up on the bad stuff if you haven’t had signs of anything bad in your life. For example, if you’re asking how your new relationship with that blond hottie will affect your life, and you get a reversed Knight of Cups, don’t throw up your hands, assuming that he’s going to

scam you or cheat on you. Take it slow and don’t push things. It could be as simple as maybe the guy just won’t be that into you, or maybe he’s so reserved that showing emotion could be difficult for him. Be aware of red flags, of course, like being told to keep the relationship a secret. But if everything seems to be above-board with him, it could just be a closeness issue because the Knight of Cups on the card is normally a reserved, quiet guy in the upright position. Reversing him can make him really reluctant to express feelings. It’s no surprise that the upside-down knight looks a bit like the Hanged Man and his in-stasis characteristic.

When you have a reading done, look at the position of the card in the spread, see if the face on the card is turned toward another card — this can indicate a connection between the two — and look at the overall energy of the spread. It’s best for you to get a live tarot reading done so you can get a full interpretation and have a discussion about how the cards interact with each other.

So, if you see that Knight of Cups reversed, don’t assume that the support or companionship you were counting on will be as you thought. That gives you greater flexibility to make changes, rather than getting caught up in a fantasy that keeps you in its grip.