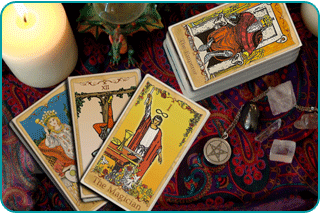 When your Tarot reading features one of the twenty-two cards that belong to the Major Arcana, the discussion will fixate on your relationship to power. Is it in your hands, out of your hands or being properly utilized regardless of control?

The Tarot is divided into three sections: The Minor Arcana is a set of forty suited cards, led by Aces and followed by the numbers two through ten. Following these are the sixteen court cards: a King, Queen, Knight and Page for each suit. All of these cards are in service of the Tarot deck’s most important and powerful cards – the Major Arcana.

Each of the Major Arcana cards is distinct and carries a specific, powerful message. At the core of each one is a lesson in how to manifest the energies of the cosmos. The cards in the Major Arcana speak about many subjects and offer unique perspectives, but the theme of all these cards is total empowerment.

The result of any Tarot reading featuring a card from the Major Arcana should be for your reader to give you a clearer sense of harnessing and actualizing your own control over destiny and satisfaction.

The card numbered one is the epitome of power and personal control. When this card appears in reference to another person, it represents a liar who has successfully begun a con. When the Magician refers to you, the reading is an indication that you have all the tools at your disposal for doing what you want.

Card number two is the High Priestess. A sense of empowerment like no other is yours when you possess knowledge. Having the answer is its own reward. There is a great satisfaction in being able to share what you know, but you may learn it is often wise to wait until asked to tell it like it is.

When the High Priestess represents someone else, your reading indicates that a person close to you knows a lot more than he or she is letting on. People who are not good at lying learn to be good at leaving out important information. When you are the High Priestess in your own reading, you are empowered by knowing lots more than the competition.

When you are able to treat yourself to the good life, to nice things, to enhancing your material world, your inner Empress is in charge. Expect to see the number three card in your Tarot reading at times when your desires are leading you to conquer old mental and emotional blocks.

When the Empress card represents someone else in your reading, this could indicate the chance that a buyer has materialized for something you want to sell. Are you looking to part with some valuable property? If the Empress represents you in your Tarot reading, you are enjoying the power to choose what is right for you and to buy it.

Card number four of the Tarot deck holds a central seat of power. It is one thing to be empowered to make choices that move your life ahead. But it is another thing to have power and hold sway over the fate of others. The Emperor is a card with this type of potency.

When this card represents another person in your Tarot reading, it means that your life is being controlled in part by a parent, partner, boss or other authority figure. When this card appears as an indication of your fate, you will have the ultimate answer to your own destiny through your actions.

If your involvement with a group is growing, the Hierophant card empowers you to find a good place for yourself. This is the Tarot’s number five card and it oversees all of your interactions when you take on the identity of a group or organization.

If the Hierophant represents another person in your reading, you are discovering a new hero who speaks what you feel. If this card represents you, your membership is opening doors.

This card is the Tarot’s card of partnership. Card number six indicates that finding yourself can often be an excursion as a union. This card empowers you to learn more about yourself through your interactions with another person and to grow more empowered because of it. The Lovers card always refers to both of you.