The Tarot Suit of Swords 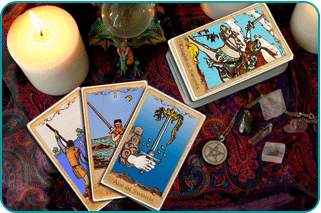 The Tarot’s four suits cover human experience pretty well. Beyond the cerebral communication of Swords, there is the material plane covered by Pentacles, our emotional experiences covered by the suit of Cups, and our creative nature, which is expressed in the Tarot by Walking Sticks or Wands. All of our thoughts, ideas and conversations exist in a sphere of reality that is neither tangible nor emotional. The Tarot deck expresses this phenomenon as a Sword. Your thoughts are truly the only thing you have to yourself. Information is different than other things you give away. When you share information, another person has it, but you still have it too. Information catalogued in our brain feeds cerebral thought. This exists without having an emotional side, although our thoughts are often inseparable from feelings. Our ideas often lead to creative expression or manifest as plans to make money or advance our social interactions.

The beauty of the Tarot deck is its coverage of all the states of human experience in less than eighty cards. They describe the past, explore the state you are in and predict the future. There are fourteen cards in the suit of Swords in the deck. Each of them covers one of the phases of thinking and communication. In the first phase, a “thought” is your mind producing communication. Communication starts the second phase with a discussion of a thought, be it in person, on the phone, online or in some other form. The third phase in this is in experiencing the expression of the idea, be it listening to a friend, or reading words in a centuries old book or seeing a message in a painting on a museum wall.

When a Sword card appears in your reading, thoughts and communication dominate. Your reading is divided into looking at your past, present and future. A Sword card in the past position can recall a good idea you had. If you thought about moving to a pleasant part of the world and everything you have now is because of this idea, you might see an upbeat, visionary Sword card in the past position. If you are currently talking about where you want to go in life, a Sword card in the present position will not only reflect this, it might reveal the psychology behind your plans. One great thing about the Tarot is the clues it offers you about your deepest motivations. In the future position, a Sword card can be interpreted as you getting your say so in a dispute or having an idea of how to solve your current problems.

When many cards from the suit of Swords appear in your reading, your situation is not dominated by action or results, but by analysis. The phrase “paralysis by analysis” might apply if you find that all you do is talk about and describe things in your world instead of seizing opportunities or embracing passions. A Tarot reading without any Swords might indicate wallowing in emotion and process without any plan or audience for your efforts.

When your Tarot reading has cards with Swords and cards with Pentacles, pay attention to discussions about money and possessions. When the suit of Wands accompanies Swords, your ideas are able to find a productive outlet. With Cups, Swords can produce poetic words of love as easily as raging rants that might appear in the heat of the moment.

Each card from the suit of Swords carries detailed meanings, and the complex composition of each one changes as other cards join the reading. Isolated, though, there is a specific relationship each of these cards has to the human condition’s natural use of thinking and communicating. Read below to see what each card covers in the area of cerebral manifestations.

In conclusion, the presence of Swords might mean the absence of passion and pleasure in your life as you have much thinking, sorting and communication to take care of. But the process of analysis can be as fun and rewarding as any other part of life, so enjoy holding your sword high.

The Tarot Cards in the Suit of Swords

Keen Editorial Staff
Keen's Editorial Staff is made up of world-class writers, astrologers, psychics, and advisors with diverse experience and spiritual sensitivity.
The Eight Cards: Understanding Boundaries
The Number Three Cards of the Tarot