The Five of Swords Tarot Card 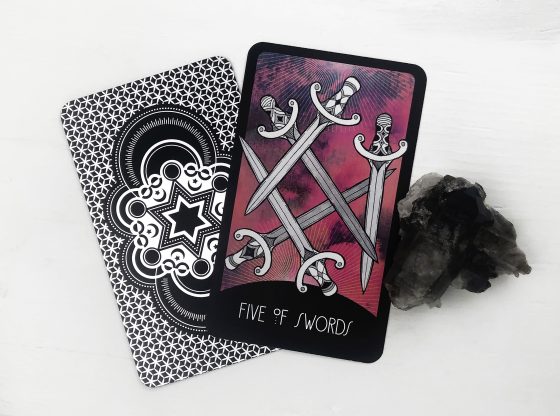 Have you been looking out for yourself? Has this come at the expense of others? Has this come at the expense of your reputation, your integrity or even your relationships? Have you had to stick up for yourself after some violation of trust? Whether your recent selfish actions have been out of self-preservation or a bullying need to have more than your fair share, the Five of Swords is a card that you may be encountering soon in a Tarot reading. The disenchantment of selfishness looms large.

A man with a rather ugly expression is gathering up discarded swords. He has two over his left shoulder and is grabbing the handle of a third. Before him lay two swords on the ground and two men walking away from him. His hair blows in the wind, mimicking the sharp grey clouds blowing over a blue sky above him. Beyond the retreating men is an ocean of choppy waves.

What you see is what you get in this card. These two men are obviously done with whatever was involving them with this lead character. The swords are unscathed, and nobody is beaten or bruised. Swords symbolize words, thoughts, theory and arguments. This lead character has won the argument but lost the people in his life. His smug expression is the ignorance of one who does not yet understand the term “Pyrrhic Victory.” The chaotic, windy landscape underscores the changes that this card brings about. There are many things we keep to ourselves, often out of a sense of self-respect or self-preservation. The Five of Swords is a card of consequences that arise from unleashing our thoughts into hostile verbal assaults without consideration of consequence.

Every Tarot reading is divided into past, present and future sections and each card landing in a section tells a story about you with that specific time frame in mind.

When the Five of Swords lands in the past position, this brings up a certain selfish action that you took in the past – be it last week or years ago. This action is the foundation of where you stand now. If your life is in shambles, you can understand that compromising your integrity may have been the undoing of your reputation and cost you opportunities. On the positive side of this card, if you were in a bad relationship or being forced to submit to an unhealthy person, the Five of Swords in this position would assert that your standing up to an abuser in your past has led to a healthy present. The intensity of this justifiable confrontation was a breakthrough. You learned to put yourself first when enough had become enough and continue build your life on that foundation to this day.

The darker side of this card dominates the present position. This is showing your current activity to be quite selfish. The Five of Swords is not a card you will be proud to see in the present position of your reading. Perhaps you have let someone down. A spouse who is pursuing the pleasures of an affair and neglecting his or her family would see the Five of Swords in this position. A boss who has fired some employees from the company he or she oversees in order to receive an exorbitant pays raise would see this card arise in this position. When it appears here, your Tarot reader may gloss over the dark side and discuss themes of self-assertion and independence, but you will still be confronted with how you are putting your reputation on the line with an ongoing series of self-centered activity.

The Five of Swords is both a beacon of hope and a dire warning when it is in the future position. A situation that at present seems to be controlling you will soon be crushed by your assertion of independence and righteousness. If you are succeeding and in control at present, this card in the future position demands that you conduct yourself with integrity or to expect a scandal to become public knowledge when you least expect it and when it will do the most damage.

A Tarot reading places cards next to each other in order to add a dynamic power to each card. This lets a Tarot card influence the cards around it and to simultaneously have its meaning affected by those cards appearing in the reading as well.

The Five of Swords is related to two Major Arcana cards: The Hierophant (card #5) and The Devil (card #15). In many ways, the Five of Swords is the perfect combination of both. The Hierophant sticks to the established way of doing things with no regard to whether or not they are offensive, as his actions are protected by the reputation of the larger order. The Devil is the card representing a pursuit of pleasure no matter what the cost. The Five of Swords submits to the status quo for gain or acts on behalf of individual desire from a position of unchecked power. When either of these cards appears in a reading with the Five of Swords, you are in for a greater isolation from responsibility, but the inevitable consequences of your selfish ways are adding up even faster. Slow down your pursuit of power.

When the Three of Wands is present in a reading with this card, you are starting a big project with such focus that the other facets of your life that do not work with it are falling away. This could be your own business or a new creative endeavor. With the Eight of Cups combining with the Five of Swords, your selfishness has roots in an emotional abandonment or other loss of love. With The High Priestess present, beware the resentment of those around you over your share of an inheritance or other prize.

When the Five of Swords is in a reading with the Temperance card, your quest to assert yourself has at its core a righteous cause and you should be advised to take it slow and steady. When paired with The Empress or The Fool card you will see less consequences for your selfishness as it will not create enemies as the Five of Swords is so prone to do.

Keen Editorial Staff
Keen's Editorial Staff is made up of world-class writers, astrologers, psychics, and advisors with diverse experience and spiritual sensitivity.
The Eight of Cups Tarot Card
The Page of Swords Tarot Card