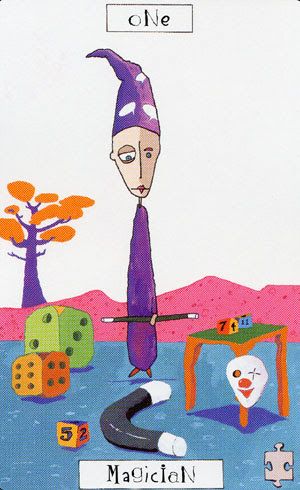 Hasan, The Magician from the Phantasmagoric Theater Tarot by Graham Cameron, stands alone on the stage in front of a painted backdrop. His right eye is open to the world around him, while his left eye contemplates an interior landscape. Poised between two worlds, Hasan is the most balanced character in the Tarot. The Magician is the first of many character cards in this deck to have an actual name. I’ve never seen or heard of such a thing in any other deck.  Hasan is surrounded by his very unusual props. He is no ordinary Magician, all light, shadow, and illusion, for he holds the Wand of Materialization in his hand. At his command, ideas, concepts, and dreams of all kinds become solid and tangible as they manifest in the everyday world.

The Magician’s number is One, his element is Air, he is ruled by the planet Mercury, and his direction is every direction.  East, South, West, and North…the Magician stands at the crossroads where the four winds collide. He is as capable of creating confusion as he is of establishing an orderly reality.  The Magician helps sell your ideas and solve your problems. Ignoring The Magician leads to frustration, stagnation, or chaos.

What’s in the cards for your future? Get a tarot reading today!

Hasan views the audience as chess pieces and rolls the dice to determine the outcome of the game. The mask is hung to reflect an ever-changing flow of emotions, while the magnet on the floor serves both to attract and repel situations, people, and things. Hasan is fond of puzzles and games of chance and he always wins. See the lucky 7-11 on the table top?

Meeting the Magician on Your Journey

The Magician is the first guide The Fool encounters on his journey through life. Typically, this card appears when you have all the puzzle pieces and need help putting them together. He represents someone who will work a little magic for you by offering inspiration, encouragement, and practical help. Hasan is all about results. As a potential partner or friend, he signifies a witty individual with high levels of energy. Well spoken, intelligent, committed, practical and creative.

In the upright position, Hasan The Magician is professional, organized, focused, logical, self-determined and a master promoter. When reversed, he is sly, argumentative, resentful, pretentious, and a liar.  Graham Cameron, the creator of the Phantasmagoric Theater Tarot, offers us this word of caution regarding Hasan, “Be warned, The Magician can sell you anything.”