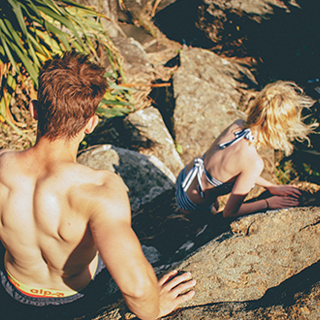 When Lion meets Scorpion, sparks are inevitable. That’s especially true when Leos come with a lot of masculine, “king of the jungle” energy and Scorpios fall on the intuitive, feminine side of the spectrum. But what happens when Leo men and Scorpio women decide to live, work, or play together for good? Some star signs are slightly star-crossed, and this water-fire combo is a good example of that. Even the traits they have in common, such as passion and independence, can lead to major clashes if they’re not on the same page. However, all hope is not lost for good chemistry between these two. Sometimes, the most “incompatible” matches can actually become the most interesting relationships, and the Scorpio-Leo dynamic is certainly an interesting one.

As part of a pair that includes a female Scorpio and a male Leo, it will help to know more about each other’s most dominant character traits and tendencies. Whether friends or colleagues, new lovers or life partners, Scorpio women and Leo men can have compatibility by taking advantage of their differences and being willing to compromise and consider each other’s perspectives.

Leo (July 23-August 22) is a fire sign associated with a strong ego and a warm heart. If you have a Leo man in your life, he’s probably a popular guy who makes you feel special – when his attentions and affections turn your way. He has a lot of friends, and he enjoys solving problems and helping others, even if it’s scary. However, he has a tendency to spread himself pretty thin, and some of his most attention-seeking behavior is actually just a sign that he’s insecure or craves human connection.

Leo men are deeper than they seem, so don’t let his boisterous personality or non-committal attitude trick you into thinking he’s superficial or naïve. Rest assured, he’s trying to figure you out, especially if you’re a seductive and enigmatic Scorpio who doesn’t glom onto him like everyone else. When Leos understand and deal with their desires in healthy ways, they can be great collaborators and nurturers. In fact, they’re the best versions of themselves when they have a loyal partner in their pride, so it’s in a Leo man’s best interest to stay loyal.

Meet the Scorpio Woman: Selective, Mysterious & Onto Your Secrets

If anyone can soften the Leo man’s roar, it’s the Scorpio woman (October 23-November 21). She’s his match in many ways, but the real question is: does he actually want to meet his match? When in a romantic or platonic relationship with a Scorpio woman, be prepared to be confused, because she tends to be unpredictable and mysterious even to those who know her best. However, the Scorpio woman’s complexity can be a great benefit, because she knows how to balance the extremes of logic and reason, emotional and physical, masculine and feminine.

Simply put, a Scorpio absorbs every emotion and experience to her core. She feels things deeply, and her actions always reflect her changing moods and perspectives. When the Scorpio woman is scorned, she strikes. But when she feels respected and protected, she shows her love. She doesn’t take pleasure in playing games, because she’s looking for authenticity, and she’s going to expect the same from her mate.

Both Leos and Scorpios can be possessive and obsessive if they don’t feel valued, but  can also be fiercely loyal with the right mate. They’ll tap into deep wells of emotion eventually, but Leo passes for superficial while Scorpio masquerades as a locked box and their relationship might take time to blossom. Here are some pointers for navigating romance with each star sign. Talk to a love psychic on Keen to learn more!

Trying to tame a Leo man? To paraphrase your fellow Scorpio, Katy Perry, you’re gonna hear him roar. Your Leo partner likes to do his own thing and, if you’re like most Scorpio women, you do too. However, you’re used to celebrating your partner’s accomplishments and pursuing goals as a team, and you can’t expect the same from him. His life won’t revolve around you, and that probably sounds fine at first, but it will get aggravating if you expect him to show you off as much as he shows himself off.

Some will malign Leo men as predators who love the chase but won’t commit. However, a satisfied and confident Leo will actually double down on his loyalty, choosing to pursue deep love and affection from one source over the attention of many. Like all fire signs, Leos can be intense and unpredictable, but Scorpios are intense too. Here’s the bottom line: if you stroke his ego and keep his secrets, he’ll be putty in your hands.

As a Leo man, you crave intimacy and look for partners who enjoy experimenting and expressing themselves in the bedroom. Fortunately, this describes the Scorpio woman to a T. Your Scorpio partner is a confident, thoughtful, spontaneous lover who likes to please and be pleased. She’s more sizzle than sting when she feels respected, so don’t cross her boundaries or disappoint her with low-energy romps, and she will exceed your expectations by a mile. However, your relationship isn’t confined to the physical realm.

It’s important to be prepared for some emotional clashes, despite your physical chemistry. Scorpio women are mysterious, intense creatures, and your partner is probably no exception. Her behavior may be unpredictable at first, but soon you’ll realize that she’s giving you a rare opportunity to experience the aquatic depths of her real emotions. If you want to meet her high expectations and break down her emotional walls, you’ll need to show that you’re receptive and willing to lose control from time to time.

When Lions & Scorpions Work Together

Some of the most intense and dramatic relationships develop in board rooms, not bedrooms. Are you a Scorpio woman with a Leo co-worker, or vice versa? Scorpio women like to be in control, which might be tough for a Leo man, but they also want a partner who’s confident enough to stand up for himself and take the lead. That part will come much easier for Leo, because he’s born to take charge and attract the confidence of others. If the two are equal collaborators on a project, they’ll do well by sticking to separate tasks (hint: Leo should probably do the lion’s share of the networking).

Whether you’re a Leo man or a Scorpio woman, your personal star chart can reveal a lot more about your needs and desires in a relationship. Where do you get your energy, and how do you navigate the complexities of sex, love, and friendship? Reach out to an online spiritual advisor today to learn more about yourself and your partner.

Keen Editorial Staff
Keen's Editorial Staff is made up of world-class writers, astrologers, psychics, and advisors with diverse experience and spiritual sensitivity.
Speaking Your Truth: How to Strengthen The Throat Chakra
How to Read Marseilles Tarot Cards