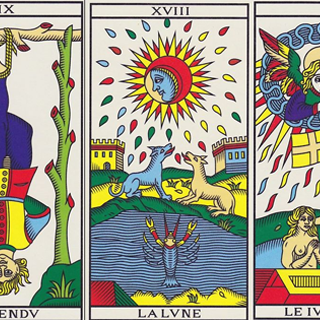 Are you grappling with an important question or decision, and you don’t know which path to take? Do you want some advice about a loved one or a life goal? Tarot readings have offered clarity for countless generations before you, and the fine art of interpreting cards is still just as relevant today. But whether you’re looking for answers or trying to expand your tarot knowledge, one particular tarot deck is worth a closer look. The Tarot of Marseilles – or the Tarot de Marseille, as it’s known in its home country – is an old French deck that has inspired many modern tarot patterns and designs. This deck includes Christian imagery and floral designs that serve as fillers or symbols, depending on your own personal take on the deck.

History of the Marseilles Tarot Deck

The Tarot of Marseilles is centuries older than the popular Waite Colman-Smith deck, with some origin stories tracing its patterns as far back as 15th-century Italy. The 56-card deck eventually surged in popularity in the 1850’s, when artists and card makers created similar designs in Marseilles and other French towns. While it was first designed for entertainment purposes, borrowing from Italian playing card designs, it was adopted by spiritual communities in the 17th century and remained quite popular in Europe for divining purposes.

Eventually, the Marseilles style was phased out by decks depicting animals or different artistic genres, which seemed more sophisticated and connected to divination than these original playing cards. However, some of today’s most popular modern Tarot decks were influenced by – or entirely based on – the Marseilles model, and it’s enjoying a resurgence of popularity as more people seek spreads that are open to interpretation.

How to Approach the Tarot of Marseilles

Your own mind is the key to interpreting your Marseilles spreads, so make sure you have the right mindset when you begin. Unlike the popular Waite Colman-Smith tarot decks, which are designed for divining purposes, the Tarot of Marseilles originated as a deck of playing cards. That means your tarot spreads will be wide open to interpretation. These cards are meant to stimulate your conscious and unconscious mind, not impose external meaning or make specific predictions, so it’s important to approach each spread with an open mind and let your instincts guide you through the story it tells.

In fact, storytelling is more important than anything else, because these cards interact with each other and have meanings that may be more abstract or unique than other versions. Before you try to interpret your first Marseilles tarot spread, it’s important to let go of the interpretations that applied to other decks, and focus on these particular cards in their current arrangement. For example, the tower on the Tower card can still carry negative meanings, but now it’s an upright hospital struck by divine light, rather than a crumbling fortress hit by destructive lightning. In the right light (no pun intended), this could indicate positive change and healing to come, rather than disaster, turmoil, and dashed dreams. Each card in the Majors follows the same versatile pattern.

Why You Should Use the Tarot of Marseilles

Today, you have many Tarot decks to choose from, and many artistic interpretations of each particular deck. Why use the Tarot de Marseilles? Well, just like the cards themselves, each deck can be applied to many different spreads and situations. Your ideal deck may change from one circumstance to the next, but the Tarot of Marseilles allows you to discover more about your own mind, leading to epiphanies and helpful insights into your relationships and behaviors.

While there are several ways to spread your Marseilles cards, the most common is to stick to the Majors and spread them like a two- to five-panel story. If you crave a deck with simplicity, this is the one for you. However, you’ll need to be ready to understand make note of your own reactions. When spreading your Marseilles tarot cards, the first step will always be the most important: note your immediate instincts. How does each card make you feel? Which details stick out first? Which emotions, memories, and ideas are in your mind right now? Your own brain will make some unique connections between the cards and your own life, and it will also pick up on patterns to connect the cards and form a story. Listen to this story, and then delve into the deeper meanings of each card.

For more information about following your heart and interpreting your future, reach out to a psychic advisor on Keen who can read your Tarot of Marseilles spread and help you navigate your feelings and reactions.