The Mercury Communiqué: Mercury in Aries 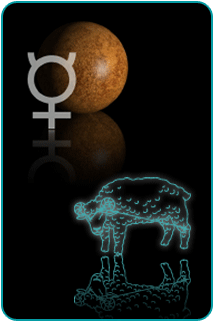 Many people think that they are good at hiding what is going on in their minds. We often mask what we are thinking or conceal our feelings. This is normal. It is often safer to be discreet and hold back on expressing yourself. Sometimes you may have been wrong about something and are better off for not having voiced your opinion.

But there are times that you are truly conflicted about how you feel or what you think. You might be of two minds on a subject, clearly seeing both sides of an argument. There are times in life when we have ambivalent feelings involving love, anger, grief, boundaries and other sensitive topics. Knowing how you really feel or what you truly think comes from deep inside a part of your mind that goes beyond what you have learned. It is often so hard to articulate your viewpoint that finding the words and expressing a complex series of emotions and conjectures can be overwhelming.

The position of certain planets can assist or hinder your ability to be in touch with your feelings and your thoughts. Our feelings are ruled by the Moon, our thoughts by the Sun. The earth’s relationship to the Sun is consistent; cyclical patterns determine whether our thinking is foggy or clear. The Moon circles the zodiac on a monthly basis and when our emotions are free of the influence of earthly events, they tend to follow a monthly cycle.

But regardless of the positions of the Sun and Moon, there are times when we are more in touch with our thoughts and feelings. We are able to articulate our position on those days and are lost in a fog of ambivalence on other days. This is because communication is ruled by the planet Mercury. When Mercury is interacting well with your zodiac sign, you can more easily express yourself. When the little messenger planet is getting tense with your sign, though, you can expect to have a more difficult time communicating. This includes communicating with yourself.

Dilemma: You are hearing information that does not logically make sense with what you have been told.
Unconscious Communication: You will scratch your head a lot while Mercury is in Aries. This is your unconscious telling you to review the facts before expressing an opinion.

Dilemma: You have been voicing an opinion that you no longer firmly believe. The problem is that you do not know how to express your doubts.
Unconscious Communication: You lift your eyebrows in excitement when you hear someone discuss the position that you actually hold.

Dilemma: You find yourself pleading ignorance, saying that you do not know things that you actually do. Your need to avoid confrontation has become downright timidity.
Unconscious Communication: Shrugging your shoulders involuntarily represents a blocking of communication. Knowing this, speak up each time you feel yourself do this and you will gain confidence.

Dilemma: You are indecisive about taking a stance, not that you do not care, but nobody on either side of the argument strikes you as worthy of your commitment.
Unconscious Communication: You will be tapping your fingers as you suffer fools. A steady palm means that you like someone more than you might be willing to admit.

Dilemma: You are saying all the right things and trying to fit in, but something tells you that if you left right now, you would soon be better off in a completely different environment.
Unconscious Communication: You are smiling but placing your hand over your mouth, unconsciously making sure that someone does not get to know the real you.

Dilemma: To say that your heart is not in your job right now would be an understatement. You are hardly there as well, calling in sick or daydreaming while sitting at your desk.
Unconscious Communication: You are prone to mumbling answers to questions. This is your preference to resign and move on, but without anywhere to go, you become increasingly inaudible to those around you.

Dilemma: Your public image is getting tougher for you to control. You want people to see you in a certain way, but you are coming to the realization that your self-image is not how others view you.
Unconscious Communication: Licking your lips more than usual is your unconscious response to wanting to deliver a message, but having nobody to hear the real you. Mercury in Aries communicates a clearer picture of how you are perceived.

Dilemma: Someone new in your life has a lot of comments that are not sitting well with you. Your silence, though, has put this person into overdrive in questioning whether everything is okay.
Unconscious Communication: You are looking down at the floor in avoidance of this person, as you know a confrontation could be disastrous. Your unconscious wants you to sit this one out at all costs.

Dilemma: New opportunities suddenly seem a bit scary, as your ordinarily optimistic side is suddenly growing conservative and cautious. You have gambled and won and gambled and lost too many times in life to not know which path to take this time.
Unconscious Communication: Tapping your feet more than normal is a desire to try your luck yet again.

Dilemma: You are having a tough time adapting to a relationship that has undergone a drastic change. This other person is no longer conforming to the role you assigned him or her and you do not know how that makes you feel.
Unconscious Communication: Shifting in your seat reveals the discomfort that this breaking from the norm is causing. You must bring it up eventually.

Dilemma: Gossip is spreading about someone and you are conflicted as to whether to believe it or to stand up and challenge these harsh new words.
Unconscious Communication: Fidgeting with your hair might leave a pencil or two more entangled than you hoped, but your real wish to pull on someone else’s hair is at the core of this behavior that you silently express.

Dilemma: Not knowing which bill to pay is becoming a major irritant. Your whole financial juggling act has got to be tossed soon.
Unconscious Communication: Doodling on paper is your unconscious telling you that you should be writing a check instead of spending more money on frivolous stuff.