The Mercury Communiqué: Mercury in Gemini 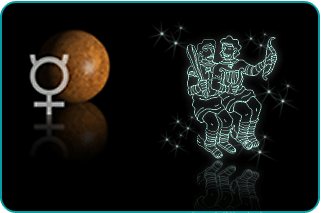 The fastest planet in the zodiac is Mercury. This is the planet that rules communication – what you let out to the world and how you interpret what is communicated to you. While we are verbal beings, this little planet oversees your five senses. Two people can see and taste the same thing in different ways. Where Mercury is can explain these differences.

Gemini is the zodiac sign that switches between absorbing experience and creating new information. It is ruled by Mercury and so these phenomena are accelerated whenever the little planet is visiting this sign. This year, Mercury’s visit to the sign of the Twins is a quick one. Safely in Gemini on June 10, it will go deeper into the zodiac on June 25. In this small window of time, though, you have an opportunity to tell it like it is. The nature of Mercury is to get the information out and the nature of Gemini is to make a connection with a specific person or type of person with whom you are suddenly a twin.

Depending on your zodiac sign, Mercury’s visit to Gemini signals your chance to talk about love to a possible soulmate or a raise with your boss, and a variety of topics with a variety of individuals in between. Read for your sign below to discover with whom you will hit it off and what you can expect to gain from conversation while Mercury’s quick trip through Gemini inspires you to find your communication twin.

Who to Befriend: Look for a neighbor to be of great assistance. You two may hit it off and a friendship could grow. A city compliance officer may help you with a local nuisance. Get to know the boy next door; he may be all grown up now.
Who to Avoid: Someone new to your job or school who asks for the “inside dope” from a position of cynicism.

Who to Befriend: Someone you meet at a rally or gathering that carries the same beliefs in a cause or lifestyle as you. There is a greater need now to reinforce how you see the world and you will be attracting this sort of like-minded energy.
Who to Avoid: People who claim to be open-minded but are intolerant and don’t appreciate the commitment you have made.

Who to Befriend: You will have the ability to attract almost too many people. Your speech and mannerisms will draw a wide variety of admirers. Focus on isolating the ones with whom you would most like to settle down.
Who to Avoid: The person who insists that the two of you were made for each other probably just made that all up.

Who to Befriend: Be on the prowl for someone with a sense of style and fashion that is a little ahead of its time but always good-looking. You can talk your way into this person’s affections with little effort.
Who to Avoid: Busybody workaholics who expect you to meet an arbitrary standard of their own design. Whenever possible, point out that they cannot meet their own expectations and disengage.

Who to Befriend: You will have many opportunities for friendly, yet superficial encounters. There are plenty of party invites that will assist you in attracting the beautiful people into your life. If, however, you are craving substance in your interpersonal relationships, you are out of luck.
Who to Avoid: The nightclub creeps are all around – watch out!

Who to Befriend: The people who are doing well at the moment will be crediting you for their success. This makes networking your way to a higher rung of the career ladder reason enough to put off a passion pursuit in favor of professional advancement.
Who to Avoid: Love interests from your past are trying to drag you down with guilt trips and outright lies.

Who to Befriend: Is your professor single? Seriously, since school is out for summer, why not find out if a learned man, who was looking at you almost as often as you were checking him out, is as well versed in the ways of love as he is in the class he teaches.
Who to Avoid: A friend will try to set you up with someone in order to coordinate double dating. Avoid meeting someone under these circumstances until Mercury leaves Gemini.

Who to Befriend: A friend of a friend has been asking about you – perhaps your favorite social networking site has some friend additions who may be strangers … but are good looking strangers! Get the “low-down” on your newest fans before meeting in person.
Who to Avoid: A guy who is too much like you and into the same things as you will be a step backwards.

Who to Befriend: Partnership intensity heats up to the point that you may be carrying on more than one quickly deepening relationship at the same time. While Mercury allows you the mental and physical aptitude to juggle such things, the emotional consequences will appear before the end of June.
Who to Avoid: The bad eggs will all avoid you. You have a repellent energy to those in whom you have no interest.

Who to Befriend: If you belong to a coed gym, there is a cute hunk waiting to be a little less lonely. Pursuing some aerobic workouts together could be the best way to burn calories and passion at the same time.
Who to Avoid: Your couch potato ex may be looking for a house where anyone but he is paying the cable or satellite bill. Ignore his charming advances no matter how seductive he sounds.

Who to Befriend: A man with children is looking for someone serious and you might be getting to the point where all the casual flirtations of the past few months or years have amounted to loneliness and little else.
Who to Avoid: The sweet talker who makes you laugh will press for something physical early on. It won’t lead anywhere close to a real partnership.

Who to Befriend: Your search for a roommate or a tenant will lead to new possible soulmate candidates. The guy with whom you have an argument could actually be stirring your soul more than the passive and pleasant men you meet.
Who to Avoid: Anyone interested in networking while you date is a dud.

Keen Editorial Staff
Keen's Editorial Staff is made up of world-class writers, astrologers, psychics, and advisors with diverse experience and spiritual sensitivity.
Sun in Cancer: The Summer Solstice
Sun in Gemini: Talking About Love