The Mercury Communiqué: Mercury in Leo 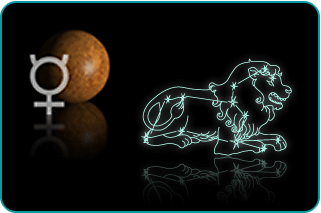 We interpret stimuli from our environment and we convey that interpretation to the world. Even if we are to stay silent, the way we all conduct ourselves can tell everyone volumes about what we think and how we feel. The information we try to hide and avoid communicating often spills out when we least want it to.

Is there a reason that we can be understood if needed at some times, and completely incapable of getting our point across at other times? Perhaps the answer is in the stars. Mercury, the planet of communication, is always moving fast about the zodiac. It can move through a zodiac sign in a week and a half at top speed. Since Mercury rules communication, its change of locations in the zodiac coincides with changes in our ability to say what we want and have it understood, as well as our capacity for comprehending what is being communicated to us.

Mercury moves into the zodiac sign of Leo on July 9 and is there until July 27. Leo is the most self-oriented sign in the zodiac. When the planet of communication is in the zodiac sign that is all about “me-me-me” most people get pretty self-centered. But your Mercury communiqué during this period can help you find out what really makes a special someone tick. Communication is both the giving and receiving of information. When you take advantage of the tendency for everyone to talk about himself or herself and communicate in self-serving ways, remaining quiet and observant yields you tangible evidence as to the character of the person in whom you may be interested.

By being the listener and observer in the communication equation, people will give you everything you need to know about who and what they are. Use the Mercury visit to Leo to gather information on what each important person in your life reveals about themselves. Read below for your sign to understand what you can expect to hear.

You are going to be able to zero in on the inner child of any possible dating material you are around. A guy who walks and talks like a man but is actually a big baby will reveal just that in some key actions of his. You probably want to hold out for a man who can balance his bravado with kindness and selflessness.

The future of your current and near-term living arrangement becomes clear if you just pay attention to what a roommate, landlord or lover are doing rather than saying. Getting August’s rent paid should be your top priority as a bit of late-summer chaos could be on the way. Do not be the person who volunteers to pay someone else’s share of a bill; you may get stuck never seeing a reimbursement.

Too many opportunities to talk about yourself could leave you stuck in familiar territory at a time when the most interesting people are all about. Try to deflect conversation back on new acquaintances or take up a post in the corner of the party and observe some soulmate material in action. Your thirst for knowledge will be satisfied quicker by nonverbal information than it could by anything someone might tell you.

A conflict will occur when someone to whom you feel emotionally attached begins to explain what he or she truly believes. Your core outlook on the world hangs in the balance, as you might be willing to give up what you believe for this person. What is stronger – your values or your budding affection? Mercury in Leo brings up twice as many questions as it will answer.

Mercury in your sign could get you feeling like the center of attention even more than usual. But look around … there may be dissension in your audience. Are you reciting the same old tired lines about who you are and what you believe instead of simply displaying these facts through your daily actions? People may be more vigilant and your criticism of a rival could backfire before you know what everyone else knows.

Speaking your mind will not get you anywhere, as conversations digress into minutia that cannot resolve any pertinent issues. Embrace communication that comes in the form of art, film or music. Do not take someone literally or you will be on the outside looking in. Study cues in body language to know when some possible dating material feels like opening up. Probe with non-sequiturs.

You could have a few people probing deep. Do not be lulled into a narcissistic cocoon talking about yourself. Get the group going on how they see the world, on what their commitments beyond the temporary mean to them and so on. People will think that you are more interesting when you allow them to tell you all about who they are.

The career ladder is there for the climbing. There will be more talk now around where you work or study about how to get ahead and nobody will seem to make the right moves … and yet these moves will be explained to you quite explicitly. Everyone might be too busy with office or classroom politics to simply follow the obvious steps for advancement.

Your chance is here to overcome the language barrier and get to know a person who is shy and removed due to some distinct cultural barriers. The breakthrough could be the beginning of a wonderful relationship. If the two of you share a common bond at the beginning, it could be a more intense partnership as Mercury moves through Leo.

Trudging through the daily grind will be easier while Mercury is in Leo, as your opinion on matters that affect other people will be sought after. Suddenly you are the center of attention. Look to see the relationships here that can be made more permanent, especially among people with power who admire your independence and attitude.

Partnership issues bubble over as you get the skinny from a lover in a clear, unstated way. This commitment will not be challenged, but the unspoken agreements between you two may need a going over with some sort of permanent ink. Lay down the law if you must; you can bet your partner will be bringing up some rather picky personal information.

A workout routine needs modification while Mercury is in Leo. There is a growing monotony in your diet or other self-centered improvement plan. Try something new, radical and fun in order to improve your health as well as to take the isolation factor away. Get with a group or class in order to express yourself while you do your self and your body a world of good.

Keen Editorial Staff
Keen's Editorial Staff is made up of world-class writers, astrologers, psychics, and advisors with diverse experience and spiritual sensitivity.
Sun in Aries: Rebirth & New Beginnings
Jupiter Gets Tense with Pluto: How Secrets Transform You