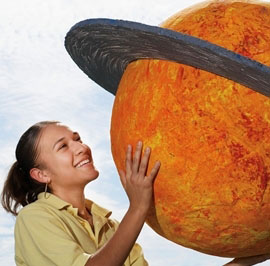 For many people, the late twenties is a time for becoming more mature and taking on more responsibilities. Major life decisions seem to loom as we leave our carefree college days and mid-twenties behind, and head toward thirty. Break-ups, marriage proposals, career changes or advancements, and property investments are all common among people in their late twenties, and there is a good astrological reason for this.

Saturn takes between 27 and 29 years to make a complete cycle around the Sun. Wherever it was in the Zodiac at the moment of your birth, it returns to that same sign and degree about every 28 years. This is referred to as Saturn’s Return — this period of the planet’s return to the same position it occupied in your natal chart.

Most people experience Saturn’s Return as a cosmic poke in the ribs from the Taskmaster planet — a blunt jab that jolts you awake and forces you to evaluate whether you’re on the right path. Are you working toward meaningful career goals? Are you involved in a satisfying, healthy relationship? If the honest answer to these questions is “yes,” then Saturn’s Return may be a relatively smooth period for you, one in which you accomplish a good deal, learn important lessons about yourself or your relationship, and take great strides toward the future you’ve envisioned for yourself.

But if the answer is “no” — perhaps you’re stuck in a dead-end job or relationship, or maybe you spend your days alone and unmotivated, not even trying to pursue the life, love or career of your dreams — Saturn will apply its severe, judgmental energy to pressure you to get back on track. This is why Saturn’s Return can be such a difficult period for so many people: It is uncomfortable to face the reality of loneliness, a lack of motivation, or an unfulfilling job or relationship. It is even harder to admit to our own role in our current situation.

For most people, Saturn’s Return brings at least some difficult lessons in becoming a more mature and disciplined version of themselves. Often, these lessons have to do with accepting and managing responsibilities, working hard and diligently toward career goals, and developing the strength of character needed to keep moving forward even when the going gets rough.

Saturn’s Return lasts about two-and-a-half to three years, during which time you will be brought up against your own limitations, mistakes and less-than-stellar choices — sometimes, again and again, like repeatedly knocking your head against a wall until you finally learn your lesson and stop.

Moving through Saturn’s Return gracefully is all about learning to take life lessons in stride, with humility and a sincere effort to improve for the future. Saturn’s Return is hardly the time to rebel against life’s limitations — doing so will only prolong the discomfort, the same way that procrastinating on doing the dishes just makes things worse in the long run. The pile of dirty cups, plates and bowls will still be there the next day — only they’ll smell even worse, and the food will be caked on and even more difficult to clean off!

So when experiencing your own Saturn’s Return, keep in mind that a humble, hardworking approach is best. Rather than running away from your responsibilities, do your best to shoulder them with grace. If Saturn’s Return feels excessively difficult or uncomfortable, it is likely that you are avoiding some lesson or responsibility that you really should embrace.

Keen Editorial Staff
Keen's Editorial Staff is made up of world-class writers, astrologers, psychics, and advisors with diverse experience and spiritual sensitivity.
Father’s Day Gifts Based on the Stars
Summer Solstice – June 21