Year of the Rabbit Love Forecast 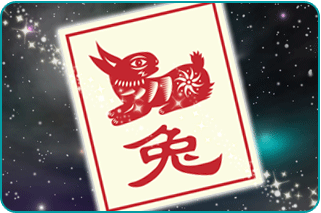 After the wild Year of the Tiger, the Chinese zodiac delivers a softer, quieter animal to rule over the next twelve months. The Rabbit is about as far from the Tiger as you can get and this will be reflected in a more peaceful, relaxed year. When it comes to love, the pouncing of the lustful Tiger is replaced by the cuddling of the comfortable Rabbit. If you had a year of party time passion, expect a big burnout if you try to go too far too fast in the year ahead. What worked for the hungry tiger in pursuit of flesh does not work for the passive rabbit in need of companionship.

Like western astrology, Chinese astrology has twelve signs. But instead of these signs being based on the monthly change in the Earth’s relationship to the Sun, the Chinese zodiac is marked annually by the New Moon in the western zodiac’s sign of Aquarius. Some years it occurs in late January and others in mid�February. Regardless of the timing, though, the change in the Chinese zodiac signals a significant change from the previous year, just as the western zodiac plots differences between month-long periods of time. We carry the traits of the Chinese animal of our birth year, but the mood of the general populace at large shifts over time and tends to correspond with the traits assigned each Chinese animal.

The New Moon on February 5 signals the start of the Year of the Rabbit. It will last until January 23, 2012 when the Year of the Dragon commences. When it comes to love, the Chinese zodiac is a good predictor of coming opportunities. Meeting and getting together with a love interest might dominate your year or be better put off until next year’s Dragon or even the Snake that follows. This is a docile year with energy favoring the domestic and the safe. Read your Chinese animal below to see if the Rabbit will be bringing you the love of your life or just another lost opportunity.

新年快乐! Pronounced “Kung hei fat choi”, this is the traditional Chinese salutation given on Chinese New Year. Loosely translated, it means “Congratulations and be prosperous”.