All About Body Language How did he know it was time to kiss you when you never said a word? You could have been sending him psychic messages. He might reject any notion that he is psychic, but most people hone their abilities to pick up psychic cues without even realizing it.

Your body language sends the most signals. If you are able to consciously control the signals your body reveals, you can withhold certain information about your desires. When you are ready to be approached, you can let the world know without ever saying a word.

Observe his ability to pick up your signals. If he is quick to act and makes a move, you are with a man who can get ahead in the world, but beware of his ability to seduce lovers all over town. Be even more wary of an interloping male who intercepts on the signals you intended for someone else and tries to insert himself in the picture.

Here are the most common body language signals to look out for from someone who is thinking about approaching you on a deeper level. Understand that you also send these signals and that a sharp sixth sense moves in when invited.

When you are out dining with a man you desire, observe that you almost involuntarily pick up your glass and drink in rhythm with him. If he picks up a napkin to wipe his mouth you might do the same regardless of whether or not there is anything on your lip. This is a psychic signal that is hard to stop because as you fall under the spell of desire, you want to reveal to this person that you follow his lead.

The reverse is true as well. You might notice people mimicking your movements in many situations. Suppose your boss at work sits across from you at a company function and follows your casual movements a few times during a meal. No matter how professional he may be acting, there is a part of him that wants to throw away his whole career for a night of passion with you in his arms.

When you want him to know that dinner can lead to you as his dessert, use the mimic can feed his confidence to make a move. When you want to remain cordial or professional, try to consciously avoid altering your behavior based on his little cues. You can pick up his intentions by observing whether he too follows the subtlest moves you make in an involuntary psychic broadcast of his deepest desires.

When a man is interested in you and cannot get away from a conversation, he will often involuntarily point his foot in your direction. He doesn’t realize that he is sending this signal to you. And he would probably deny it if he were confronted by the woman to whom he was looking at and talking to.

You might be pointing your foot right back at him as you stare at the painting on the wall and you will rarely notice yourself doing this. However, did you notice you lingered while looking at that painting and kept your foot pointing in his direction – and the artwork really wasn’t that interesting?

Wait around for the man whose foot is pointing at you. Walk away from the man who points his foot at another woman while he nods politely at a story you are telling.

The involuntary rubbing of a hand across a shoulder might appear innocent, even flippant, but it is not. It is a psychic signal of desire that is strong and easy for the person being touched to read. It might, however, be interpreted as more desperate than passionate. Some people have different levels of socialization that inhibit their psychic understanding of intentions. Understand the nature of what someone is seeking when there is a casual but unmistakable brush-up between you.

A slower, more sultry walk sends multiple psychic messages. It announces that something is worthy of inspection and a desire to be examined as well as a certain confidence in what will be discovered. While this might be a way to meet a lot of creeps, it does occasionally deliver a great catch who is tuned into the messages you send. You might sashay right past the man of your dreams only to find out that he knows you better than you know yourself.

The message of deep submission is the revelation of one or both of your underarms in the presence of the man you want. If he picks up on this psychic signal you will be his. If a man is casually revealing his armpits to you he feels comfortable around you and wants you to pull closer. One reminder: the person doing the revealing is not in control. This is the ultimate sign of surrender to passion, desire and the imagination of what might soon be

Keen Editorial Staff
Keen's Editorial Staff is made up of world-class writers, astrologers, psychics, and advisors with diverse experience and spiritual sensitivity.
5 Tips to be a Psychic Lightning Rod
Psychic Insights: Everyday Divination 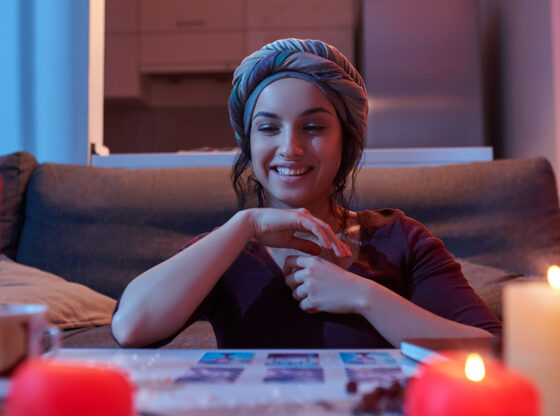