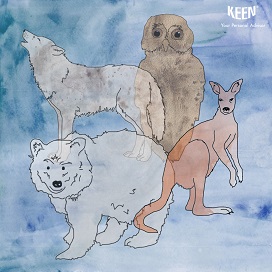 Animism is the belief in that there is a spiritual force inherent in all things, both animate and inanimate. Animals from the smallest insect to the leviathan blue whale possess it, as do all the places and objects that comprise the natural world–every object is cable of communicating emanations that interact and impact the surrounding environment and its inhabitants[1]. As currently practiced, today’s mainstream Animism seems most often to focus on the human connection to animal guides or sacred places–however, the omnipresent spirit inherent in Animism can be found in something as grand as a giant California redwood tree, or as mundane as an irksome pebble that lodges itself in your shoe.

Unlike followers of many organized Judeo-Christian and Islamic religions, Animists do not believe that man is superior to nature, but rather, that he is merely a part of the larger fabric of the universe. Animists in many cultures, especially Native Americans and other aboriginal groups whose cultural history is inexorably linked with the natural world, view man’s hubristic attempts to dominate nature as a form of perversion that is antithetical to not only the continued existence of our species, but to the life force that created and continues to reinvent the world we inhabit.

The Dawn of Time

Today, followers of Animism can be found around the globe in both modern and more traditional cultures, but the belief system has origins that are nearly as old as the human race. An Indonesian painting of a “pig deer,” now cited as one of the oldest examples of cave art, is thought to be in the neighborhood of 35,000 years old. Since the pig deer painting is only one of a very few examples of art from this era to have survived, while the animal’s exact significance cannot be known, it’s easy to surmise that the beast depicted must have held great importance to the people who enshrined its likeness on the wall of their dwelling.

Aboriginal peoples from every inhabited continent from Africa to Australia to North and South America have animal-based customs and belief systems that center on the indigenous wildlife and sacred places they call home. Animals were certainly essential to the survival of the earliest humans as a food source, but they were also a source of great peril. As a result, the species with which man interacted became integrated into their cultures, and were symbolically cast as either revered benefactors or fearsome forces of destruction. Likewise, locales tied to migratory food cycles of the hunter-gatherers that proved to be fertile hunting grounds, or sources of natural foodstuffs, evolved into sacred places.

In North America, animal spirit guides, also known as totems, are iconic symbols that spring from a wide variety of Native American tribal customs and beliefs. The Crow Tribe, who originally inhabited the Yellowstone River Valley, for example, were called the Apasáalooke, or “children of the large-beaked bird,” a name given to them by a neighboring tribe in homage to an indigenous bird. This bird, however, is thought not to have been a crow as we know it today, and has been described as “a fork-tailed bird resembling the blue jay or magpie,” likely extinct. French settlers translated the name to “Gens du Corbeaux” (People of the Crows), which the English shortened simply to Crow[2].

The Inuit people (commonly referred to as Eskimos), who are native to Arctic regions in Canada, Greenland and Alaska, believe that all things in nature have a soul, and that the soul lives after a creature dies. As a tribe that has historically relied on hunting for survival, the Intuit came to revere the polar bear, or “Nanuk,” who was considered to be “almost a man.” The Inuit believed Nanuk was responsible for the success or failure of the hunt, and so prayed to him to intercede on their behalf[3].

As with many tribal belief systems, such as Voodoo (which originated with the Dahomey people of Africa[4]), or even aspects of ancient Jewish mysticism found in the Kabbalah[5], certain elements of Animism with universal appeal have been co-opted and incorporated into a variety of spiritual practices embraced by those seeking enlightenment through a closer association with the natural world.

While the animal symbols associated with Animism have long been recognized and even celebrated by admirers in larger, mainstream culture, they are not always correctly understood. This has led some purists to argue that the convention of adopting aspects from other cultures and tailoring them to suit a personal belief system is irreverent at best and disrespectful at worst.

That said, when exploring the belief that places, things, and animals are sacred teachers, if we approach it with open hearts, receptive minds, and honorable intentions, we can open ourselves up to the messages nature imparts, and insights and blessings that are both genuine and powerful.

If you yearn to incorporate the forces of the natural world in your everyday life, why not let a KEEN advisor show you the path toward enlightenment?