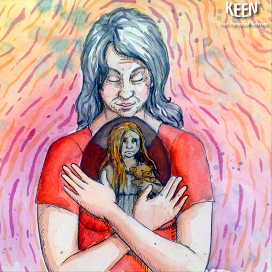 The first thing Sandra told me was, “I think I need to leave my boyfriend.”

Sandra, 47, was a financial analyst in Bridgeport, Connecticut who contacted me for advice about ending her eight-month relationship with Bryan, a 50-year-old director of a nonprofit. After connecting through an online dating service, coffee had quickly escalated to leisurely weekends together, and now their family and friends were merging. But right as the real intimacy was beginning, Sandra wanted to bolt.

“What do you think the problem is?” I asked.

Sandra was putting up defensive walls with her non-answer, but her aura spoke loud and clear, broadcasting a deep bruise that had probably existed long before Bryan entered the scene. I sensed that he was entirely tangential to her pain. Sure enough, it turned out Bryan was a good listener and kind soul. He supported her as a friend and lover, and their chemistry was to die for, a deep and prismatic connection that vacillated between effortless harmony and red hot passion. They had the kind of relationship I want for all my clients.

I honed in on a topic that made Sandra’s whole demeanor go dark and tense. “Bryan’s organization is always hosting these fundraiser banquets, and about two months ago he started asking me to come along. I just…I dread them. I can’t do it anymore. But if I don’t go, I feel like I’ve abandoned Bryan.”

Apparently, attending these socials was so painful for Sandra that she was willing to drop her entire relationship to avoid them. I’ve been to some bad dinner parties before, but neither food poisoning nor dreadful conversation could convince most people to drop a man like Bryan. No, Sandra’s problem was about something much bigger than supper.

The Heart of Sandra’s Problem

The only way to help Sandra was to guide her into the tender core of her discomfort. I pictured Sandra much younger, a time when her aura was clearer and brighter. Suddenly, another girl appeared—tall, graceful, and redheaded.

“That’s Nancy!” Sandra said when I described the vision.

When she was in the sixth grade, sophisticated, smart, and trendsetting Nancy was her idol, and in the bravest move of her twelve years on earth, she’d invited Nancy over for an after-school snack. She was so excited to have Nancy’s captive attention that she’d pulled out all the stops to impress her, showering her with endless samples from the pantry and reciting every last morsel of the week’s gossip. When Nancy left, her mother had pulled her aside and scolded her harshly.

“You are such a motor mouth! That poor girl didn’t even have a chance to speak. Good luck making friends if you don’t stop talking so much.”

Sandra sighed longingly. “I know it happened thirty years ago. In fact, I never even think about Nancy. But… remembering it now, I feel so guilty.”

Straightening Out Guilt and Shame

Guilt and shame are lookalike sisters that tend to get confused for one another. But there’s a crucial distinction. In the definition of renowned researcher Brené Brown, guilt says “I did bad,” while shame says “I am bad.”(1) Sandra didn’t believe she was a fundamentally good person who made a mistake trying to impress her classmate. She had internalized the message that she wasn’t okay: she was a blabbermouth, and she had to hide it.

Nearly everyone feels guilt and shame. Guilt can be productive. When you react to a situation with guilt, you can hold yourself accountable, own your mistakes and empathize with the people you’ve injured. But when you feel ashamed, you’re so mired in self-loathing that it’s hard to see past yourself. What a raw deal: you wound yourself and you still haven’t fixed the problem!

While guilt motivates you to make amends and move on, shame lives on inside you as a sinister, trash-talking fiend. It says you aren’t worthy of love at your core, so you’d better start acting. And shame invariably leaks out in other ways. You get defensive about the qualities you’re most ashamed of, and you loathe those qualities in others. When you’re full of shame, you shame others. Sandra’s mother used shame to change her daughter’s behavior, perhaps because of a hidden wound of her own.

The Simple Cure for Shame

Shame is so mighty it can hobble a successful woman like Sandra for decades. But it has a simple antidote: compassion. It’s impossible to feel shame when you choose to love and accept yourself. This isn’t always easy, but self-compassion can be cultivated over time.

I told Sandra we were going to combat her shame with a great big dose of warmth. I helped her connect with a voice inside her that she found comforting, a wise soul that she believed was her guardian angel. “Imagine that loving presence comforting twelve-year-old Sandra,” I said. “Even though young Sandra talked over Nancy, is she still worthy of the angel’s love?”

The Mythical Power of Names

Sandra realized that she didn’t want to end her relationship at all. She had been desperate to avoid her boyfriend’s fundraisers because they triggered her deep, secret shame around socializing. She wanted to impress the donors, but she felt so confined by a nagging internal voice that urged her to shut up and stay out of the way. Now that she’d named her shame, it didn’t seem so menacing. I advised her to talk to Bryan about her feelings and even to disclose her tender memory—like a folktale demon, shame can evaporate when it’s spoken aloud.

The Freedom to be Imperfect

Sandra wrote me a few months later with joyful news of progress. After our session, she’d begun to embrace her authentic self, sharing and chatting more at Bryan’s banquets. In the middle of one passionate conversation, she got carried away and interrupted a very important donor. The woman shot her a look, but Sandra quickly realized her transgression and apologized. “Before, I would have run to the bathroom and cried. But instead, I owned my mistake and fixed it. And that donor left us her biggest gift yet!”

If you don’t own your shame, your shame owns you. KEEN advisors can help you identify and heal the shame that stifles your authentic, true self.