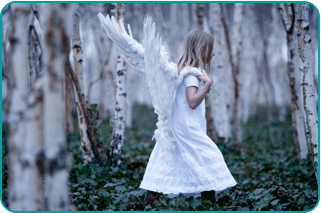 Have you ever been touched by an angel? I am not talking about a divine apparition descended from heaven or a being of light visiting you in a dream, but a real live breathing wingless angel on earth that you meet by extraordinary happenstance.

My bedroom television is stuck on the Hallmark Channel. Not a bad thing, because some of my favorite shows from decades past replay on the channel each and everyday. I usually catch a few episodes of The Golden Girls, I Love Lucy and Touched by an Angel every week. Touched by an Angel was an American drama series that premiered on CBS on September 21, 1994 and ran for 211 episodes and 9 seasons. Produced by Martha Williamson, the series stared Roma Downey, as an angel named Monica, and Della Reese, as her superior Tess. The episodes revolve around the “assignments” Monica manages and works under the guidance of her supervisor Tess. Working as a team, Monica and Tess lend their wisdom, faith and insights to help those who face a crisis or tough decision in their lives. Their messages of hope and faith inspire and their guidance transforms the lives of their assignments.

The storyline of angels working assignments on earth is not as farfetched as it seems. Just about everyone has been moved deeply by someone in his or her life in a way that is best described as “touched by an angel”. Take this story for instance from one of my students:

Maureen had just broken-up with her boyfriend after a 6-year tumultuous and emotionally abusive relationship. It took courage to leave and vow not to return. In times past, she always returned. This time she was resolute, homeless and decided the best course of action was to move back into her family’s home temporarily. She was at a crossroads in her life and needed an angel to confirm that her life would be better with the dissolution of the relationship. As she was moving things out of her house a woman walked up to her from the street and asked for a few dollars. She didn’t look like your ordinary homeless beggar. In fact, she was nicely dressed and had a fresh salon hairdo. Then out of the blue and as if she was gazing into Maureen’s soul the woman said, “I can see you just broke-up with your boyfriend and I see a man making his way into your life who will be someone who will love and respect you.” She went on to tell Maureen that she saw her in a new career and good fortune in the form of a lump sum of money coming to her soon. Then she said something only Maureen, her mother and her grandmother could have known. She told her that she must wear her grandmother’s ring, the one given to her after her grandmother’s passing. Maureen was so taken back by the message and messenger that she burst into tears. For the next few days, she was flying high as a kite reading signs and looking for more messages from God. Everyone she ran into told her she glowed all over like an angel of light. Maureen had been touched by an unusual angel delivered to her at the right evolutionary moment to bring her good news— the promise of better times. Not only that. but the experience shifted her to realize she too was an angel on earth, glowing from head to toe.

Another story comes from my eldest daughter who, although disabled, is a remarkable angel in her own right. Times were lean. And with three more days in the month before her check came in, Vianna was out of money. She had not a dime and little in the way of food in the refrigerator. Always shy, naive and a bit spacey, Vianna was walking in front of the grocery store on that fateful day heading for the stop where her ride was waiting. On the way, she struck up a nice casual conversation with a man whom she recognized from the gym. Without her saying a word about her financial situation the man pulled a twenty-dollar-bill out of his wallet and said, “I think you need this.” Gracious and appreciative, Vianna just smiled and thanked him. This experience was not an unusual one for her. It seems because she is a bit special, she is greeted almost every day by an angel on earth helping her with one thing or another. Because of her disability, she has always needed magical helpers.

By definition, angels are messengers of God. In the Hebrew bible these heavenly messengers are referred to as Elohim. The term “angel” has also been expanded to various notions of “spiritual beings” found in many other religious traditions including Islam and Christianity. Of their many roles, angels are recognized most for protecting and guiding human beings, and carrying out God’s tasks.

Angels walking on earth are extraordinary individuals with very special gifts and profound psychic abilities. They are generally old souls who seem to perform miracles just by being the compassionate people they are. They seem to be able to peer through into the depths of your soul and almost always relay something profoundly meaningful and unforgettable. What is uncanny is how they show up at that one moment you need them most. It is as if they were given you as an assignment, making their way into your life to offer the guidance you had asked for in your prayers. No, they don’t have wings, but they often are “free spirits” roaming around greeting others freely. Rich man or poor woman, beggar, but never a thief, they come in many guises, seemingly just so you can shake off your stereotypical view of what an angel should look like. Their garments of light (auras) shine brightly and they tend to vibrate at a higher energy level than most do. They can appear innocent as a child when greeting someone for the first time. It is as if they had met an old friend. In fact, some angels are children.

The encounter with an earth angel is certainly magical and meaningful. The serendipity of the meeting has an otherworldly quality about it, as if the person stepped out of a dream to deliver God’s message. With the encounter, you are usually thrown for a loop, left scratching their head wondering what on earth just happened. Later, you will likely deem it a peak spiritual experience and the story you will share countless times with those close to you. The message the angel delivers is usually just enough to instill faith that you are not alone. You are always being watched over, protected, and guided by angels above and below.