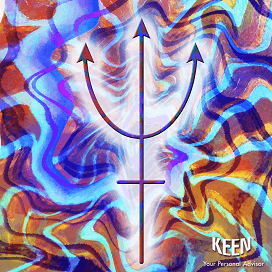 Have you felt especially introverted, dreamy, or emotional the last few months? Perhaps you’ve had major inspiration for creative projects but haven’t been able to move forward. Or maybe you’ve been struggling with some escapist behaviors but haven’t made a decision about how to address them. Maybe you’ve even felt the unfolding of new psychic abilities or noticed your intuition has been on overdrive, yet you’ve been reluctant to act on new insights.

Neptune, traveling in its own sign of Pisces, has been retrograde since mid-June. It turns direct on November 19/20th and will slowly gain forward momentum. The energy will move from internal and introverted to wanting to move out into the world.

Neptune is one of the outer planets, and as such has a larger orbit and longer journey than any of the other zodiac signs. It takes the Cosmic Dreamer about fourteen years to transit one sign. As a result, we feel the effects of Neptune more broadly. True to its nature as the great illusionist, we may not be able to get a firm handle on Neptune transits. Slippery, misty, shifting like the sea, this planet’s energies most often come in cycles of clarity and confusion.

As Neptune travels through Pisces, from now until 2025, we will have a double whammy of these energies. On a global scale, we’ll have an opportunity to recognize our illusions and collective addiction to fear and victimization as we move toward love, inclusiveness, and co-creative power with the Divine.

On a personal level, we’ll see the areas of life governed by Pisces in our natal chart become open to a sea change: the tides of Neptune may wash away all that we’ve known in this area of life, and we may be asked to sit with some emptiness and unknowing. But the sea will bring new gifts in with the tide and reform the landscape of our lives. There isn’t much we can do about it except go with the flow, own our own projections, and stay rooted in reality.

Along with Pluto transits, passages of Neptune often require assistance for graceful navigation. Because of the changeable and existential nature of Neptune, clients will often show up feeling abandoned, empty, and in danger of falling into their worst coping mechanisms. If you find yourself with the feeling of wanting to just crawl under the covers and stay there—get some support! A psychic or astrologer can really help you make sense of these planetary energies, especially since Neptune’s transits are long and cumulative.

I have several clients with their natal Sun in Pisces. As Neptune passes through their sign, they’ve all been feeling the Divine makeover. Colleen has completely changed her career, chucking her healing work to be an artist and returning to her earliest childhood passions. She’s had tremendous emotional pain for the last three years, and I’ve supported her through the most difficult moments. Just understanding what was happening has been a huge help.

Another client, Renee, has abandoned the spiritual path she’s been devoted to for decades, and together we navigated her dark night into a more peaceful mental space.

And Lynn left a romantic and business relationship that was toxic to her energetically and financially. The process has involved many rounds of mediation and legal wrangling. She’s had to own what her role was in the dissolution of the partnership, as well as stop being a martyr to her business and this man.

For each of these women, the Neptune transit has many years to run. But the hard changes have come, and now they are resting in different versions of emptiness while they see what new life will emerge. They all sought my help in fostering understanding, letting go, and achieving emotional healing.

Neptune’s transit of Pisces doesn’t just affect those with the Sun sign of the fishes. We are all feeling the energy somewhere, and it’s crucial to make your way through this time with understanding, compassion, and support. As Neptune moves forward, it’s a perfect opportunity to figure out where you are going with the tide. The retrograde may well have brought dreams and inspiration for the future, and now is the time to find the best application for those transformative new ideas.

Are you in the midst of a sea change? Advisors on Keen can support you with compassion and insight for your next steps and help you make the most of Neptune’s forward motion. Call today!

Keen Editorial Staff
Keen's Editorial Staff is made up of world-class writers, astrologers, psychics, and advisors with diverse experience and spiritual sensitivity.
How do Psychics Get Their Information During A Reading?
Working With the Scary Tarot Cards: The Tower