The Third Eye Chakra: Strengthening the Seat of Intuition and Clairvoyance 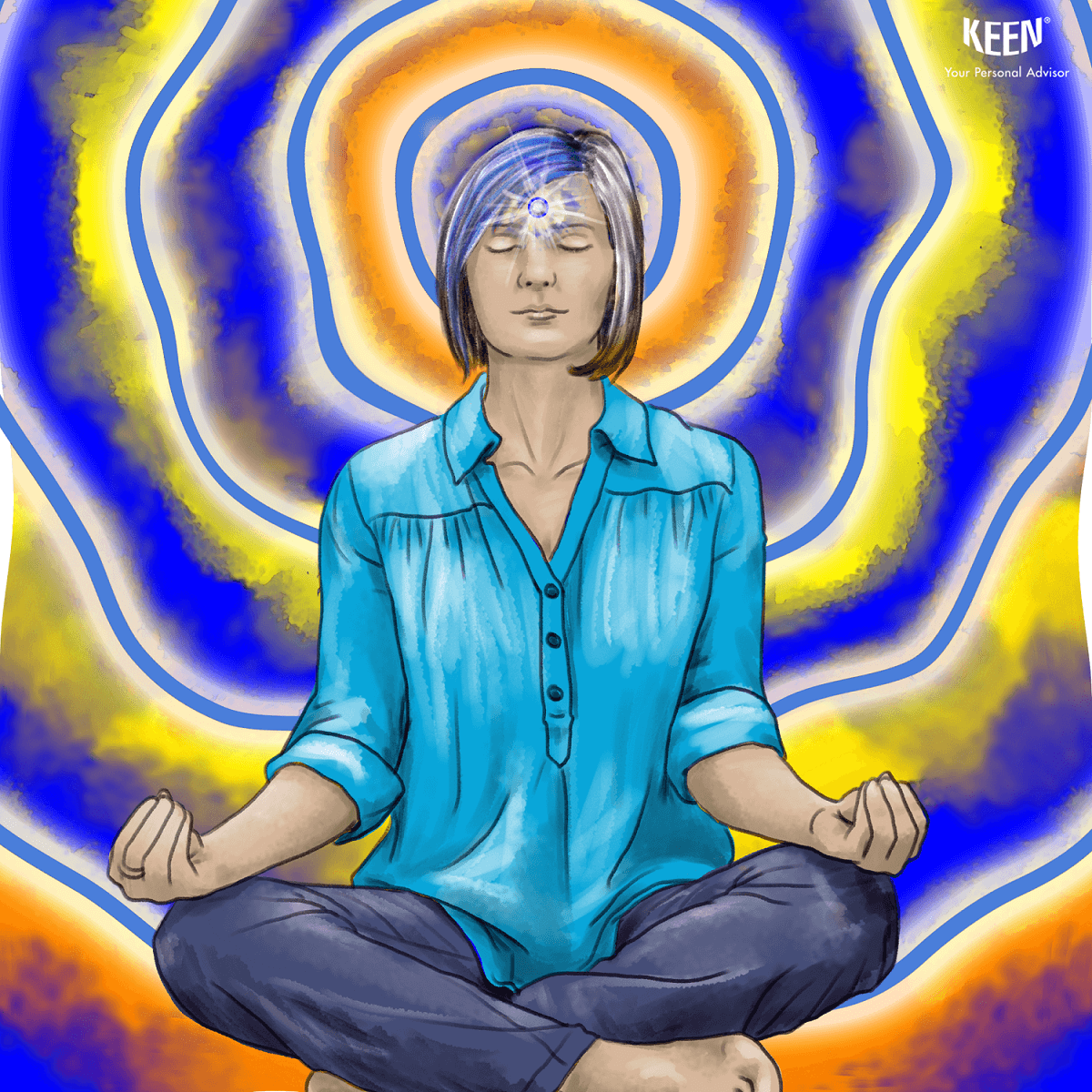 How well do you remember your dreams? Is it easy for you to imagine things or see images in your mind’s eye? Do you have a good intuition? Would you like to develop that further?

Creativity, intuition, pattern making and recognition, clairvoyance, and imagination are all governed by the sixth chakra — the third eye.

The sixth chakra is located in the center of the forehead between your eyebrows. This is often the chakra we see in mystical Indian images and it’s a popular choice in new age imagery today. Best known for its association with clairvoyance and spiritual development, this chakra also contributes to how well we perceive and work with the larger patterns of our life.

The third eye chakra develops in adolescence when we begin to recognize patterns, understand their significance, and think abstractly. We move from the innocent perception of the child’s mind to understanding that things are not always as they seem.

We begin, as adolescents, to search for our personal identity.

The color of the third eye chakra is indigo. The right of the sixth chakra is to see, the challenge is illusion. The last chakra in the “rainbow bridge,” it prepares us for our interaction with the Divine.

Our chakras serve as energy centers for the different parts of our body — physical, astral, emotional, mental, and spiritual — and they function in a variety of ways. They can be balanced, deficient, distorted, or in excess.

When balanced, the sixth chakra gives you intuition and right perception, a good memory, recall of your dreams, and access to your imagination. It also helps you to accept others’ beliefs and be open-minded.

In excess it can bring obsession, nightmares, hallucinations, or delusions.

If deficient, you might experience a difficulty in planning for the future, denial, lack of imagination, and poor memory and dream recall. Physically, third eye chakra issues may manifest in vision troubles or headaches.

The sixth chakra can be shut down by frightening environments such as war or violent scenes, or by brainwashing or being exposed to situations where what you see doesn’t match up with what you’ve been told. When we have a traumatic transition to a new identity—such as the death of a parent or a shattering divorce—our sixth chakra can shut down or collapse in self-protection.

A common energetic defense of the sixth chakra is to lose oneself in illusion. This can show up as a person who is very “spiritual” but can’t function in the real world. It also may appear as dogmatic intolerance to other points of view. At the worst, a person may disappear into delusion.

Working with Your Third Eye Chakra

The most effective way to deal with a troubled sixth chakra is to work with a skilled practitioner. Often when we are experiencing distortion in our sixth chakra, we aren’t aware of it because the maze of illusion keeps us trapped.

This is what happened to a client of mine who booked a session to increase her intuition — I’ll call her Susan. As a child, she regularly saw beings from other realms, and she wanted to return to this state. When I looked at her chakras, I saw that her sixth was very small and projecting energy rather than taking it in. I asked Susan how her family had responded to her abilities — she said that her religious mother had told her it was bad to see things. At that point, Susan shut down her third eye chakra (unknowingly) and stopped the visions. She’d run her chakra on low energy ever since, which showed up as her inability to plan for the future.

I asked Susan if she’d be willing to try painting—just for fun. She agreed and we started with a cheap kids’ painting set and paper. She felt silly at first, but she persisted. As she grew more fascinated with the images that appeared under her brush, she began to have more recall of her dreams, too. I asked her to start a dream journal and then a basic meditation practice — just 10 minutes of softly gazing at a candle. After a few months, Susan had an encounter with a being that turned out to be a spirit guide — her first psychic experience in over 50 years.

Some sixth chakra issues are more serious, which was the case for another client I had who I’ll call Lucy. Lucy came to me in deep despair over her love life and general self-image. She had been through a devastating divorce and lost custody of her children in the process. Lucy’s sixth chakra was completely collapsed and deficient. She had no positive identity, and she thought of herself as a bad mother and a defective person because her husband had left her and taken the children away.

Lucy’s situation was complex, typical of many sixth chakra issues. She needed a multi-pronged approach. I saw that Neptune and Pluto were activated in her chart, and that her field was sluggish with repressed anger that was masked by depression. Because of the planets involved, this wasn’t a short-lived time period but a deep growth opportunity.

I worked with her to clear past life issues, and recommended art therapy and asked her to keep a dream journal. We used hypnotherapy to create a more positive base self-image, and worked on letting her anger out safely. I also referred her to other professionals who helped her work through the deepest issues of her abusive marriage and assisted her in regaining custody of her children.

If you feel that you’d like to develop or strengthen this chakra, I recommend working with a vision board, playing with visual art, keeping a dream journal, and meditating. You can “talk” to your chakra through meditation and get answers directly from the source.

I understand that these suggestions appear difficult to start— and they very well may be, if your sixth chakra is deficient or sluggish. Yet, the very practices that will help the chakra develop are often those that are currently the most challenging. A certain amount of will and desire is necessary to awaken this chakra. First, you must work with your disbelief and impatience.

If you don’t feel creative, start with collaging a vision board. If you don’t remember your dreams, keep a dream journal anyway, and record any feelings, impressions, or ideas that you wake up with.

Yoga and breathwork are grounding and centering and can help reign in an overactive chakra. Child’s pose, or any seated bend where you can bring your forehead to the floor (or prop) both stimulate the third eye and allow it to be supported and rest. Balancing poses that require concentration, such as Tree, Dancer, or Eagle, focus energy into a sluggish third eye.

Flower essences of Aspen or Star of Bethlehem help for excess, and Cherry Plum, Hound’s Tongue, or Iris help with various deficient manifestations.

The gemstones of Amethyst and Lapis encourage spiritual connection and psychic cleansing and protection. Moldavite clears negative energy and offers psychic protection, while Purple Fluorite aids dreamwork and a connection to spirit.

Meditation that involves gazing at an object, like a candle flame, is especially helpful. Wearing indigo, and taking time off from distressing and violent music and imagery is also beneficial.

As always, it’s important to listen to yourself. If you feel you need help, get it! The sixth chakra often presents issues that are best supported by a guide or teacher. Psychics can often help you to the specific tools that will work best for you.

If you feel like your third eye chakra isn’t working to its fullest potential, an advisor on Keen can help.

Keen Editorial Staff
Keen's Editorial Staff is made up of world-class writers, astrologers, psychics, and advisors with diverse experience and spiritual sensitivity.
Is Your Summer Love Meant to Last?
10 Questions to Answer Before You Date Your Ex