What is a Real Poltergeist? Identifying and Curing Pesky Home Spirits 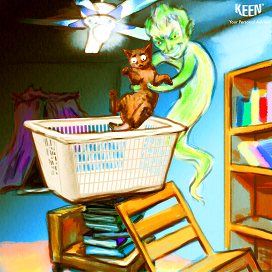 Have you ever felt an unseen presence moving about your home? Or comforted yourself in the middle of the night, praying that those unsettling noises in the walls were simply the rumbling of a boiler? Perhaps the only explanation for the number of your socks missing their match is a supernatural phenomenon. Some parapsychologists (researchers who specialize in the supernatural) would suggest you’re witnessing signs of a poltergeist.

What Is a Poltergeist?
A poltergeist, the German word for “noisy ghost,” differs in lore from your standard haunting. Ordinary haunted houses are generally inhabited by a spirit anchored to a specific spot by a traumatic event, such as loss, betrayal, or violent death. The spirits might inconvenience the home’s living tenants with frightening apparitions or untraceable noises, but its activity is often independent of goings on this side of the mortal veil. Whether a haunted manor is left to rot in foreclosure or converted to a boisterous preschool is of little consequence to the trapped spirits, who will go on their unhappy way regardless of their company. Poltergeists, on the other hand, are thought to be the psychic manifestations of a living person’s energy. Although they may appear at first glance a true haunting, it’s generally accepted in parapsychology circles that they’re more often than not related to the tumultuous emotions of a very not-dead spirit.

Poltergeists also differ from traditional hauntings in the scope of their activity. Both kinds of inhabitations can create the sense of sharing your home with an unknown entity, but a poltergeist is more likely to make you load up a U-haul. The “noisy ghost” lives up to its name, making a racket of rapping and tapping on walls and surfaces, moving household objects (either playfully or maliciously), fooling around with electrical appliances, and sometimes trashing a whole room with the aplomb of a road-weary rock star. A pattern of escalating intensity is often observed, beginning with mostly harmless pranks that gradually morph into acts of tangible violence against the tenants of a home. Victims of especially severe poltergeists have reported being tossed around like dolls, badly bruised, and even verbally harassed by disembodied voices.

How Do Poltergeists Work?
It is natural to wonder how a poltergeist can turn so cruelly against a family, if it is in fact caused by a living inhabitant of the home. Of course, the researchers who argue for this theory agree that a poltergeist is an involuntary and subconscious manifestation of an individual’s inner turmoil. The person at the epicenter, referred to in literature as the “agent,” generally has no ill intention towards their family.

How exactly the conversion from emotion to psychokinesis (the ability to move objects using only the mental faculties) goes, is unknown. While there are plenty of psychics who claim to have discovered methods for controlled psychokinesis, it’s unclear how this skill could function without the user’s knowledge. In recent years, a team of physicists has nominated a theory from quantum physics to explain the elusive link, but the case is far from closed.

One clue is found when reviewing the victims who unknowingly feed the maelstrom of a poltergeist. Overwhelmingly, these unfortunate agents are young women, although prepubescent boys have also been caught at the center. Indeed, one of the most iconic incidents involved a Bavarian law office where lighting fixtures were observed to sway and explode unprovoked—the investigating parapsychologist pointed a finger at a 19-year-old secretary, calling her a “typical poltergeist.” The investigator took it as further evidence for his accusation that, when she was happily married and retired (this being 1967, when a wedding might mean the end of a working girl’s career), all paranormal activity ceased. Outmoded assumptions about a woman’s uncontrollable anxiety over marriage aside, it is rather typical to come to this investigator’s conclusion in a poltergeist infestation: a young person, usually female, is rarely far from the scene.

Perhaps all this trend suggests is that precocious teenage girls are more likely to be scapegoated for poltergeist activity than anyone else. The notion of a hyperactive, sabotaging subconscious is common in Western culture (from Freud to Stephen King’s Carrie) and frequently associated with ‘hysteria’ and other classically female ailments. In the opinion of this author, the notion that the agents of poltergeists are generally women fits a little too conveniently with preconceived stereotypes of female psychology, and some of the classical investigations may have overlooked troubled young men as candidates.

How are Poltergeists Removed?
There are plenty of clergymen and exorcists who offer the service of poltergeist removal, but the lore is brimming with anecdotes about spirits who throw baskets of laundry and heaps of angry words at well-meaning men of the cloth. Indeed, this approach suffers from a fatal flaw: a poltergeist is not a possession. Because they are thought to be manifestations of the agent’s emotional state and not an inhabitation by an external spirit, it would seem that any haunting cured by an exorcism was not actually a real poltergeist to begin with.

Being a symptom of inner distress, poltergeists are more effectively dealt with by addressing the root problem. Counseling (spiritual or traditional), meditation, and other centering practices can help a young person gain grounding and confront the source of their discomfort and anxiety. Of course, there’s also the approach suggested by the 1967 Bavarian haunting: getting hitched. It’s not widely recommended by spiritual advisors, but it certainly could make for a good story.

Could you have a poltergeist stirring up mischief in your home? Advisors at KEEN.com can counsel you on the wisest course of action.

Keen Editorial Staff
Keen's Editorial Staff is made up of world-class writers, astrologers, psychics, and advisors with diverse experience and spiritual sensitivity.
Let Baby Birds Fly: Recognizing Bad Relationships From The Start
The 4 Tarot Queens: Meet the Matriarchs of the Minor Arcana