The 4 Tarot Queens: Meet the Matriarchs of the Minor Arcana 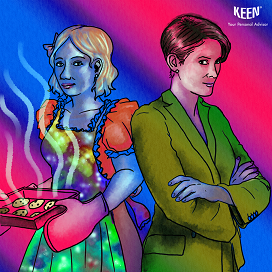 The most skilled Tarot readers masterfully wed the lush symbolism of the deck to tangible aspects of the querent’s life. It might seem, then, that the court cards are almost free passes, as they typically signify people involved in a situation. But there’s so much more to reading these cards than identifying their living, breathing counterparts—every combination of suit and royal title corresponds to a unique psychology that, when expertly examined, will guide the querent towards a more fulfilling relationship with that person. Previously, we got up-close and personal with the real-life Kings of the Minor Arcana. Now, it’s the ladies’ turn: who are the Queens of the deck, really?

The Queen of Cups: As the suit that governs emotion, the Queen of Cups lives by the wisdom of her heart. Exquisitely sensitive and intuitive, nothing gets past her in conversation—not even the most subtle blush, blink, or flinch. She “gets” people. She can pick your soulmate out of a lineup, and she’s the kind of person you call first when you’ve got a relationship question. When this Queen is secure and self-possessed, she’s often a healer, therapist, or exceptionally devoted parental figure. When she doesn’t have a solid grounding in acceptance and compassion, though, she comes off more as a tyrant swayed to extremes by her emotion. She’s easily upset by perceived slights or judgments. When they’re family matriarchs, these Queens can be needy and difficult, sometimes veering into the territory of downright manipulation. If you’re dealing with an insecure Queen of Cups, remember that she craves affection and love most when deciding how to proceed.

The Queen of Wands: Wands are the suit of creativity, inspiration, and spirituality, and the Queen embodies these attributes with a touch of feminine energy. This Queen is most easily known by her passion, which may or may not also be her primary occupation. Look for a  professor, art teacher, or bakery owner, to name just a few of her manifestations. Her energy for creative pursuits and crafts are boundless, but more material things fall to the wayside. That’s why her house might have a microwave from the late 80s. Completely devoted to her art or science, she’ll do some wild things to find her next bout of inspiration—anything from working long hours to dabbling in the occult. When she’s at her best, her interminable drive will synthesize new ideas and aesthetics that can change the world. The flip side is, a totally unbalanced Queen of Wands risks being devoured by her obsession and need for recognition. If you’re dealing with this Queen in business, respecting and praising her craft will score you lots of points. If you’re at odds with her life’s passion in a romantic situation, don’t expect the arrangement to last.

The Queen of Swords: By their nature, the suit of Swords is one of action, upheaval, and power. The Queen of Swords is often in a difficult position when her natural ambition and courage cross societal expectations of femininity, but she’ll make radical sacrifices to reach her zenith in business, as in love. If you work with this Queen, she’s probably your superior (or standing on your head to get there). What kind of leader she is, though, depends on her temperament. When her innate sharpness is balanced with compassion and empathy, she’s fair, competent, and the best boss you’ll ever have. Beware of a Queen whose moral compass points South, though—she’ll undercut and double cross without a second’s pause. When you’re working with a real-life Queen of Swords, expect smooth sailing, so long as you’re respectful of her authority. If you don’t think she deserves your deference, though, you’ll have to go head to head with her: she won’t compromise her ambition in love or business.

The Queen of Pentacles: Earthy, pragmatic, and material are the chief attributes of the suit of Pentacles. The Queen is a softer version of her husband, the King. For example: if the little Page goes home to his parents and asks for a new bike, the King might balk, “What’s wrong with your old one?” The Queen, on the other hand, would suggest, “Let’s make a chore chart. If you follow it for six months, you’ll earn enough for a bike.” She’s just as practical as the King, but often less harsh. A born planner, she has her kid’s college funds in a spreadsheet, and her way of showing her appreciation for family and friends is with a home-cooked meal, a much-wanted present, or financial support. At her best, she’s the ultimate provider and caretaker: giving, but realistic and assertive when need be. At her worst, she’s overworked and obsessed with finances. If she’s your parent, she can be downright aggravating when she tries to micromanage your career choices. Remembering that her primary concern is your well-being—and remembering her quirk for planning—might help you handle her criticism.

The Queens of the Minor Arcana differ in their passions and life purposes, but they’re united in their emotional power. The attributes typically associated with classical femininity—nurturing, softness, and consideration—temper the raw, action-oriented messages of the King cards. Of course, it’s a common misconception that Queens must correspond exclusively to women. Queen cards are a state of mind, and though they’re typically a mature (either in years or wisdom) woman in your life, there are circumstances where they represent men. A skilled reader will be able to discern this arrangement. Whatever your situation, a Queen in your spread suggests that a relationship is at the heart of your quest. When you understand the Queen in your life, you’ll find harmony, joy, and success.

Having trouble with a Queen in your life? Advisors at KEEN.com can help you rethink and improve your relationships in work, family, and romance.

Keen Editorial Staff
Keen's Editorial Staff is made up of world-class writers, astrologers, psychics, and advisors with diverse experience and spiritual sensitivity.
What is a Real Poltergeist? Identifying and Curing Pesky Home Spirits
The Alpha Males of Tarot in Real Life