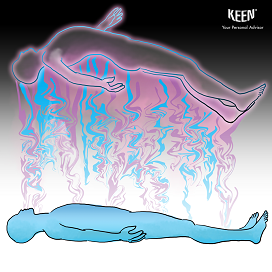 Do you wish you could afford a tropical vacation every weekend? Do you crave the feeling of total freedom—or just a break from everyday life? You might consider learning astral projection, a way to take a mental journey anywhere, anytime.

What Are Astral Projections?

An astral projection is an out-of-body experience in which your consciousness temporarily separates from your physical body. Advanced astral projection practitioners describe traveling to distant locations while their bodies lay still, thousands of miles away. Like many psychic practices, astral projection is thought to be an innate ability that must be developed. While there may be prodigies and individuals who connect with their gift in early childhood, it is thought that all humans are capable of learning.

Astral projection has been recorded across cultures for centuries, and the details tend to vary in context. In Hindu texts (including Autobiography of a Yogi), spiritual leaders perform miracles by leaving their bodies. Compare this benevolent practice to the Japanese Ikiryo, a vengeful “living ghost” that springs into existence when a person’s anger grows so uncontainable that a new spiritual avatar buds to act out their will. But whether an astral projection is manifested by a well-meaning yogi or begrudging Average Joe, the mechanics and description of leaving the body are strikingly similar.

In modern astral projection circles, certain terminology has become somewhat standard. First and foremost, you will hear about the silver cord. Often described as a tether that links the body and soul, it is an endlessly elastic cable, a spiritual umbilical cord. The term is derived from a biblical passage (Ecclesiastes 12:6-7):

Remember him—before the silver cord is severed, or the golden bowl is broken; before the pitcher is shattered at the spring or the wheel broken at the well, and the dust returns to the ground it came from, and the spirit returns to God who gave it.

In this passage, astral projection practitioners interpret the silver cord as a metaphor for the union of body and soul, but many also “see” and “feel” it in their out-of-body journeys. Whether the cord is a metaphor or an exact description varies by practitioner.

There is also some disagreement about whether the silver cord can be damaged during astral projection. Some teachers argue that it is unbreakable by nature, never to be severed until the moment of death. Others advise caution: The physical body is quite vulnerable during a projection, and who knows what ill-meaning spirits and demons wander the “astral plane”? For wary practitioners, it’s typical to enlist the guardianship of a protective master spirit, like an angel, prophet, spiritual leader, or patron saint. In either case, it is advisable to take precautions so that the physical body is reasonably safe during an astral projection.

In the astral projection community, it is often thought that projections occur during sleep without our knowledge and that dreams are merely the brain’s “cover story.” And, although there is not a consensus, many practitioners believe lucid dreaming and astral projection are one and the same. Lucid dreaming is the experience of waking within your dream—it’s usually marked by an ability to explore, interact, and alter the “story” playing out. It’s easy to see the parallels between a waking dream and projected consciousness. Despite the disagreement on the exact relationship between dreams and astral projection, most teachers would agree that the connection is worth exploring on an individual basis. Keeping a dream log (it helps to write immediately upon waking) is a common place to start.

How to Learn Astral Projection

Just as in any other psychic practice, there is no one way to learn astral projection. But there are a few suggestions that are widely implemented among beginners:

You can’t get to be Derek Jeter after one game of T-ball, and you won’t become an astral projection guru after one try. Some people take years to achieve an out-of-body experience, even with regular practice. If you’re getting frustrated with your progress, you might consider seeking a teacher’s guidance. But whether you go it alone or with a pro’s help, don’t get discouraged if your first (or second, or third) try isn’t a miraculous, immersive journey to paradise—trust that you are learning and be curious about what you find.

Do you want to learn astral projection? Advisors at KEEN.com can assist beginners and advanced students alike.