Cups Runneth Over: Are You Falling for Your Creative Inspiration?

Home /Tarot/Cups Runneth Over: Are You Falling for Your Creative Inspiration?
Tarot | 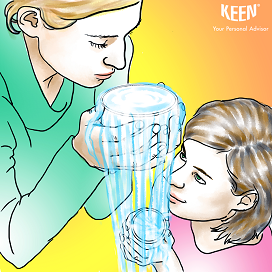 The line between creative energy and love can be a thin and permeable one. When creating with someone—whether it is music, art, a building, or a major project for a client—late nights, mutual frustrations, exciting breakthroughs, and a shared mind can lead toward romance. It also can lead to confusion and the fear that taking the next step can either ruin the friendship or compromise the creativity—or both. Falling for a creative partner is a challenge and one that must be taken a case at a time.

Same Dreams, Same Goal, but Not the Same Heart

Alex was an artist with tile. While many people might not think of tiling as an art, Alex knew it could be. He created beautiful, natural-looking, decorative displays for people, combining artistry and function, and did well enough to hire someone else. Summer wasn’t as gifted technically as he was, at least not at first, but she had an amazing vision. If a client requested that his or her foyer feel like the ocean, but not be a picture of it, she instinctively knew how to balance vibrant and pale blues and reds to create the sensation of a sun-setting beach. Alex knew all the tricks—how placing a bright stone in a certain spot could make it look like a glinting wave. Together, Alex and Summer worked wonders.

Not surprisingly, as Alex said when he came to see me for a Tarot reading, he had fallen for her. “We work so well together. It’s like we’re one mind when we conceptualize the project, and when we get to work, we are almost like one body. I want so much to ask her out—we seem perfect for each other.”

Of course, as I explained, being perfect together at something doesn’t always imply the ability to be a couple. There is much more to it. A rapport can transfer over, but once the stimulus of creation is removed, and real life sets in, there might not be that same connection.

I decided to do a two-card Minor Arcana reading because I felt Alex’s feelings for Summer could be explained not by the law of the universe, but what governs us every day.

The first draw was a reversed Three of Cups. This card can signal being unbalanced—of being in an affair. The three people in it are often taken to mean “three’s a crowd.” I asked Alex about Summer’s dating life, and he said that while she sometimes mentions going on dates, she hasn’t been involved in anything serious in the few months that they have worked together.

Of course, this card could explain a different sort of “third wheel”—their business. Alex depended on Summer—she was a vital part of his ability to take on and satisfy new clients. Similarly, Summer not only needed this job, but she also loved it. After years of bouncing around, she finally found something that she was excellent at and that she loved.

It could be interpreted that this was what was coming between them. Not another lover, but something that was, in some ways, more profound and less transient. They had found a true partnership that let both of them create. Maybe it wouldn’t be right for love to come between that.

This seemed to be confirmed when, next, I drew the upright Three of Pentacles, which shows architects building a cathedral and listening intently to a young apprentice. The apprentice isn’t as experienced and hasn’t accomplished as much, but the older men value him not by the wrinkles on his face, but by the wisdom of his speech. This is how truly respectful partnerships are made, and how creativity can flourish. It represents the respectful space that forms between people. It isn’t a space that pushes people apart, but one that binds them, and one in which ideas can be almost wordlessly shared.

Alex wasn’t exactly cheered by what his reading told us, but it wasn’t bad news, either. In life, we have many different kinds of relationships, and they aren’t all romantic or sexual. You aren’t always “meant to be,” but that’s only if you define “being” as “being lovers.”

A creative partnership—whether it is model and photographer, co-songwriters, bandmates, an artistic collective, or the best strategists in the firm’s accounting department—are real and vital relationships. They are a hugely important part of life. It is wrong to define a relationship that doesn’t become romantic as a failure.

Two friends I knew are an example of how sometimes it’s better to keep creative partnerships platonic. These two friends had started a band. His vocals matched with hers beautifully, and since they both had a similar outlook on life and music, the songwriting flowed naturally. After many late nights in the studio, trips to crummy little venues, and overnighters in strange towns around the Midwest, they thought it was silly not to date. Soon enough, they moved in together. It seemed like the perfect story, but there were problems. For one thing, he hated dishes in the sink and would wash them immediately. She was more of a “let it go for now” type.

This didn’t seem like a big deal, but it affected the couple’s songwriting. Differences weren’t worked out; they became part of a larger battlefield. Eventually, the two friends broke up, in every possible way. The story doesn’t always have to end poorly, of course. Many times it works out great. But it’s important to keep in mind you’re introducing a wild card into something that had been working.

Alex’s feelings for Summer hadn’t changed when he left. But he had come to realize that the path wasn’t just romance or frustration and smoldered longing. There are many paths we can walk down with the people in our lives. Finding a partner for one thing doesn’t inevitably make them a partner in everything else. Life is too varied, too wild, and too unpredictable to make everything fit one or two boxes. Exploring your heart, asking yourself what is most important and lasting, and getting help from qualified advisors, can help you find the right path.

Do you want answers about your relationship? Advisors at KEEN.com, including Tarot readers and psychics, can fill you in.

Keen Editorial Staff
Keen's Editorial Staff is made up of world-class writers, astrologers, psychics, and advisors with diverse experience and spiritual sensitivity.
What Is Astral Projection? Out-of-Body Experiences for Everybody
Why Oscar Nominees and Other Celebrities Rely on Psychic Advice