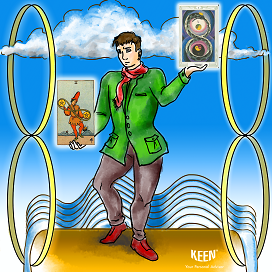 If you’re beginning to read the Tarot or are a veteran looking to branch out, you want to find a deck that naturally excites you. Fortunately (or unfortunately, for the indecisive), the choices are staggering. It’s not just about selecting your favorite artwork: like a thoughtfully crafted work of literature, a good deck offers enough obvious symbolism to keep your interpretations straightforward as well as some tantalizing, mysterious details that usher you towards deeper revelations. So how will you know what style is right for you?

Is traditional really best? The most iconic—and popular—deck is the Rider-Waite (sometimes called Rider Waite Smith), created in 1910. The name comes from the creators: occultist A.E. Waite, who authored the accompanying text about deciphering the cards, artist Pamela Coleman Smith, who was selected for her skills in painting as well as clairvoyance, and the deck’s British publisher, the Rider Company. The Rider-Waite deck heavily features Egyptian symbolism (look no further than The Chariot to see for yourself) and Christian imagery (The Hierophant is undoubtedly a papal figure). Because of its prominence and historical significance, many first Tarot decks are Rider-Waite. But for better or worse, the deck’s age is apparent—meaning that the plentiful religious and occult symbols can feel dated and challenging to decipher for today’s reader. Waite’s original guidebook, too, is by modern standards verbose. While there’s certainly a lot to love about the Tarot’s most famous incarnation, new users oughtn’t feel pressured to begin with it. In fact, like learning to appreciate classical music or film, it may even benefit Tarot readers to experience the Rider-Waite deck at an advanced stage in their development.

Mythological Decks: Perfect for the Literary
If you’re the kind of person who reads vociferously and finds a story in everything, a Tarot deck inspired by mythological lore could be your ideal fit. Trained Tarot readers generally agree that a narrative structure (albeit a complicated one) unfolds as you flip through the deck in order. Certain characters emerge: The Fool, the Emperor, the knights of the Minor Arcana, for example. Owing to this literary layout, countless artists have projected other mythologies (Greek and Celtic, for example) on top of the archetypes found in the Tarot. This means that when you draw a card, your interpretation is guided not just by its traditional meaning and associations, but by the story illustrated on the front. Parables, messages, and new meanings tumble out, making this flavor of deck ideal for scholars, armchair or otherwise.

Angels and Fairies: Decks for the Magical
Nowadays, most purveyors of Tarot cards offer a few variations on the theme of magical beings. Whether it’s angels, witches, demons, or fey, these decks use evocative images of some supernatural breed to reframe traditional interpretations. If you’re someone who regularly seeks from a guardian angel or has always had an affinity for nymphs and dryads, you can bet that a beautifully illustrated themed deck will awaken your intuition and inner wisdom. Be sure to choose one whose art is in accord with your conception of magic and personally resonant for optimal insight.

Abstract Art: A Tool for the Intuitive
Some decks don’t even depict scenes with people—they use symbols, colors, and abstract forms to get the point across. For some readers, these decks are frustrating. It’s as if they entirely bypass the verbal part of our brains, offering us few clues to an underlying story or meaning. But other readers consider enigmatic illustrations to be a major boost to their intuitive abilities. By forcing the reader to think differently about the cards, they can come to new meanings and far-reaching connections. If you trained on a more traditional deck and are now considering trying a more abstract one, be prepared to experiment with your style. You might find that meditation and achieving a trance-like state can help crack these cards.

Novelty Decks: Not Just for Fun
Just because your Tarot deck is Justice League themed (yes, that really exists) doesn’t mean it’s for show only. There’s absolutely no reason you can’t use a novelty deck for real readings, so don’t be afraid to buy one if you like it! In fact, if you’re a big fan with a lot of emotional investment in the deck’s theme, you can experience some powerful insights.

Whether you’re shopping in a brick-and-mortar store or over the web, you often won’t be able to take Tarot cards out of their box before buying. Fortunately, many have sample art on the box, as well as reviews online, to help you decide. Even though there are a paralyzing number of choices, don’t think too much about the decision—you’ll know when you have the right deck by the feeling it gives you (or, in the case of this author, when it falls off the shelf and conks you on the head). Happy shopping!

Are you teaching yourself how to read Tarot or searching for your next deck? Advisors at KEEN.com can help you get your bearings and build a solid spiritual foundation in the deck.