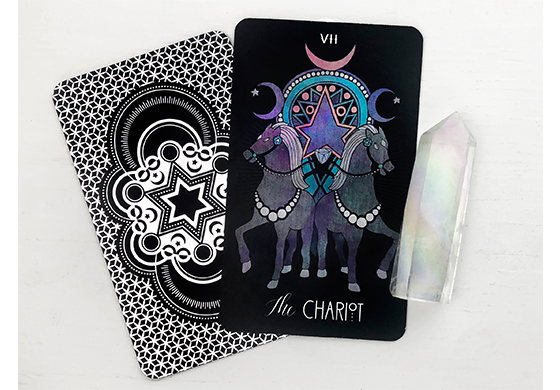 Are you in control? Did you just win big? Have you finally reached a new level of accomplishment? Are you being handed control of a big project? The Chariot is the Tarot card most associated with victory and control. When you see this card in a Tarot reading in times of struggle, understand that when Caesar conquered an opposing army, his victory parade made the years of struggle worth it. If you are not yet victorious, learn to appreciate your struggle, as the celebration you can have will be even more enjoyable with your challenges still fresh in your mind. If you recently accomplished a great task, be sure to revel in your enjoyment of the moment; there are no guarantees of future enjoyment, so soak up the feeling of pure triumph.

A king stands triumphant in his chariot. It has a blue awning decorated with white stars, but he chooses to stand at the very front of his ride and the view of him is from directly head-on. He wears a decorative suit of ceremonial armor – a breastplate, frilled forearm metal and gold belt that has astrological symbols matching the pattern of his kilt. He carries a small scepter in his hand and wears a gold crown with a mounted star floating above his head. Both shoulders have the face of the moon in profile. The front of his chariot is adorned with a winged shield. Pulling The Chariot are two sphinxes, a black one on the left and white one on the right. They are in repose. Behind him are the spires of the kingdom’s castles under a golden sky.

What’s in the cards for you? Get a tarot reading today.

The king here is in his moment of triumph. He has just arrived from a great victory and is paused to survey his ever-growing kingdom, The sphinxes which pull the chariot indicate a triumph over foreign land, as Caesar benefitted from the conquest of Egypt. And yet the sphinxes themselves represent the unsolvable riddle. The black and white sphinxes mimic the black and white pillars of The High Priestess card, representing knowledge as a key to victory and conquest being predicated on solving the riddle first. The star on his crown is the star from Tarot Card #17, The Star, indicating he had great hope and inspiration in making his conquest.

Every Tarot reading evolves form cards in the past position through to the present position and on into the future position. The meaning of a card can be quite different in various positions.

When The Chariot is in the past position, you had a triumph in the past that has led you to where you are now. Sometimes, early success in life can leave ordinary good times down the road a little hollow. A good start on life might have given you some material advantages that are creating your current comfort … or dilemma.

If The Chariot is in your reading’s present position, you are experiencing a great triumph at the moment. This might be something for which you have wanted for months or years. It might be something that was just handed to you and now you are feeling insecure about being in control. There are often mixed feelings that come with getting what you wanted, as an unease about the change inherent in this transformation makes one lose touch with seeing the possibilities.

The future is the position in which The Chariot card exerts its strongest energy. When this card is in your future, your reading can fill you with confidence that a goal you seek is attainable, a battle for control will be won. This card blesses any reading when it lands in the future position.

No card should stand alone in your reading. A Tarot reading is a spread of cards that each influence the other cards spread about.

The relationship of The Chariot to The High Priestess is undeniable and underscores the Tarot’s emphasis on wisdom being the path to victory. The intuition and confidence of the king is reflected by his relationship to The Star card; The Chariot is #7 in the Tarot deck and The Star is #17. When either or both The High Priestess or The Star are in a reading with The Chariot, your victory is more defined and blessed, satisfying hopes on a profound level.

Cards with the number 7 in them accompanying The Chariot in your reading add to the potency of this card. The Seven of Wands emphasizes the battle you are fighting and its importance in enjoying the fruits of your victory. The Seven of Pentacles slows down a coming victory but only ensures it will be that much more impressive. The Seven of Cups makes the victory of The Chariot one that you have dreamed about, but be careful here, as this reading may be delivering the proverbial too much of a good thing. When the Seven of Swords card appears in a reading with The Chariot, your quick wits will bring an unlikely victory.

There are some cards in the deck that have a core misery to them. When they appear in a reading with The Chariot, their edge is removed somewhat. The Nine of Swords and Death are two cards that have little redemption to them. The Chariot delivers some much needed light and hope to an otherwise gloomy reading.

When any of the kings of the Tarot deck are in a reading that includes The Chariot, you are about to get more control over some aspect of your life than you may need. The King of Swords delivers you control over how people talk about you and gives a consistency to how everyone perceives you. The King of Wands pairing up with The Chariot assures that a creative effort or a project at work or school will garner attention and acclaim for you. The King of Pentacles is an assurance that the coming Chariot victory will be a financial gain, if not a windfall, for you. The King of Cups is a card that signals a mastery of one’s emotions; paired with The Chariot and your Tarot reading paves the way for a love conquest of soulmate magnitude. Are you ready for your victory lap?

Keen Editorial Staff
Keen's Editorial Staff is made up of world-class writers, astrologers, psychics, and advisors with diverse experience and spiritual sensitivity.
The Ace of Cups Tarot Card
The Knight of Wands Tarot Card