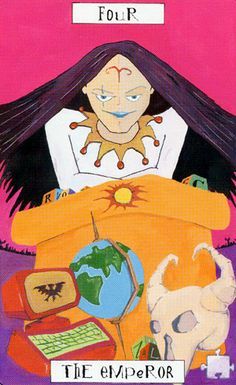 The Emperor, from the Phantasmagoric Theater Tarot by Graham Cameron, leans upon his podium as he welcomes The Fool to the next stage of his journey.  This particular Emperor is the ultimate showman, with bells on his collar, long, flowing hair that reminds me of a circus tent, and the symbol of Aries, the first sign of the Zodiac painted on his forehead. The symbol on his computer screen is the same as that on the shield The Empress carries. His eyes are mesmerizing and a little intimidating. Is that a white shirt he’s wearing? Or is it a straitjacket?

The Emperor’s number is 4, his direction is South, his element is Fire, and he is ruled by the planet Mars. It is obvious that the podium is his command center. The Emperor is sure of himself and he has set things up just the way he likes them. It is hard work, dedication, and determination that have put him on top. He is a man of action and there will be no sitting idly on his throne while others run the show!

A tarot reader is ready to guide you on your journey. Get a reading today!

I normally have a take it or leave it relationship with The Emperor card, but this one resonates with me on many different levels. I appreciate his tech skills and intense interest in the people and things around him. He is grounded and his roots run deep, allowing him to grow and evolve in interesting ways. He is strong enough to learn from his mistakes and he brings to mind this quote by Ani DiFranco, “It’s great being your own boss, but then, you know, you make your own mistakes, you know, and you own them. You know, so it’s empowering, and it’s also humbling along the way.”

“Welcome to the theater the most powerful player of all: the Emperor. This is the man who rules the stage. He is a creative and energetic man. In front of him are his props; the computer shows his ability to adapt to modern technology; the globe symbolizes his authority, a ram’s skull stands for his astrological sign, Aries. A self-determined man who struggled for his position of dominion, he built Phantasmagoric Theater upon a divine law. The Emperor will not allow himself to be dominated; he is here to teach us self-discipline. He is yang, demanding, powerful, and headstrong. The Emperor is here to instruct and encourage us to stand up for ourselves.”

Upright meanings: Strong will, excellent father figure, stability, leadership, intelligence, perseverance, law and order, promotion.  When the upright Emperor shows up in a relationship reading, it indicates to me that there is a good possibility of a long-term commitment and/or marriage.

Reversed meanings: Unable or unwilling to listen, stubborn, vanity, cowardice, bad temper, poor father figure, lack of ambition, loss of authority. When the reversed Emperor shows up in a relationship reading, it indicates to me that things are unstable and there will be no lasting commitment.