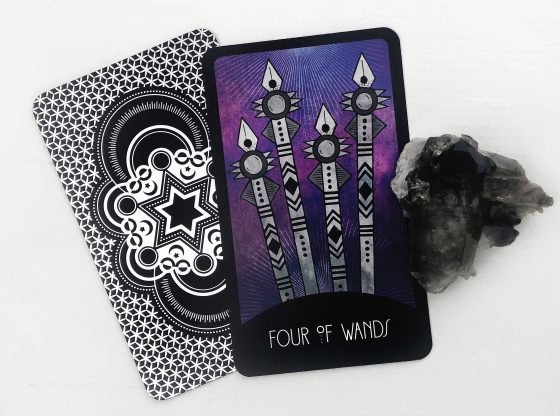 Did you pull the Four of Wands reversed in a spread? The message is “It ain’t over yet.” Something is preventing a situation from coming to a close, but stay calm; that can be a good thing, just as it can be a not-good thing. Your course of action could range from letting things percolate to actively tackling a sticking point, but, overall, this is a card that indicates you are not done with your work yet.

The Fours, the Wands, and the Four of Wands

Wands are the energy and activity suit, denoting an event or process. Fours signal completion, family, responsibility, and support. The whole card is generally thought of as the marriage card because of the imagery – a chuppah-style canopy over a married couple or castle – but it’s also a completion card. Something is being completed and coming to an end, which does not have to be a bad end; it’s just over. It’s generally seen as a positive or positive-leaning card.

On the Flip Side

Of course, when you reverse the card, things don’t look that rosy, at least at first. Whatever your question is about, that situation isn’t done yet, no matter what it looks like. That’s not necessarily dire. If you take the card at its “completion” face value, that could also mean that you still have a chance to change or get a positive return regarding the situation.

For example, maybe you’re applying to apartments because you want to move, and all the good places are getting snapped up before you can even walk in the door. It’s possible that one of those places will suddenly have a last-minute opening that you can grab, so keep in contact with those places – with the Four of Wands reversed, you never know!

On a less positive side, this could indicate a lack of closure. Be prepared to let that go. Sometimes you can’t get the type of closure you want, and you have to work on letting go anyway.

In its family meaning, the Four of Wands reversed could indicate miscommunications and drifting apart. It could technically indicate divorce, but don’t jump to conclusions there just from the appearance of the card. But it would be a good idea to review how you and others have been dealing with each other. The key to bringing a situation to a satisfactory conclusion may be in how you and others relate.

As for support, there’s something not right about the situation. It’s too soon. When you see this card upside down, the ground is now above the people and canopy that are just sort of hanging on by some miracle. You’re not ready to get married, you’re not ready to move – or maybe you are, but something in the planning is off. Consider expanding your budget; maybe you’ll have unexpected costs, or you’re not checking things out thoroughly, and that could cost you more in the end.

One interesting note: Depending on the deck you use, the upside-down canopy along with the line marking the ground can look a bit like a laundry line with clothes drying on it. In other words, nothing is particularly wrong; you may just have to wait for things to be ready on their own before you proceed. The canopy can also look like a tablecloth that’s been caught under the legs of the table, indicating a precarious situation or one where things are just stuck.

Where Is This, Now?

Combining the meaning of the card with its position in the spread is straightforward. If the Four of Wands reversed shows up in a future event or outcome position, then your current path is leading toward something not being resolved. If the card’s in a past position, then the lack of closure of something in the past is influencing you now.

You may want to get a professional reading that uses the Four of Wands reversed in the querent position in order to learn more about the surrounding influences and events. Using that card as a querent gives you more detail that is focused specifically on what role that card is playing in your life.

So, the Four of Wands reversed isn’t necessarily negative, but something’s not over yet. You need to wait some more, and possibly re-evaluate things, to steer the situation to a conclusion that is best for everyone. Assume that what you think is the end or conclusion really isn’t, and keep an eye out for opportunities to make positive changes. Your path is never set and you can always find another route.